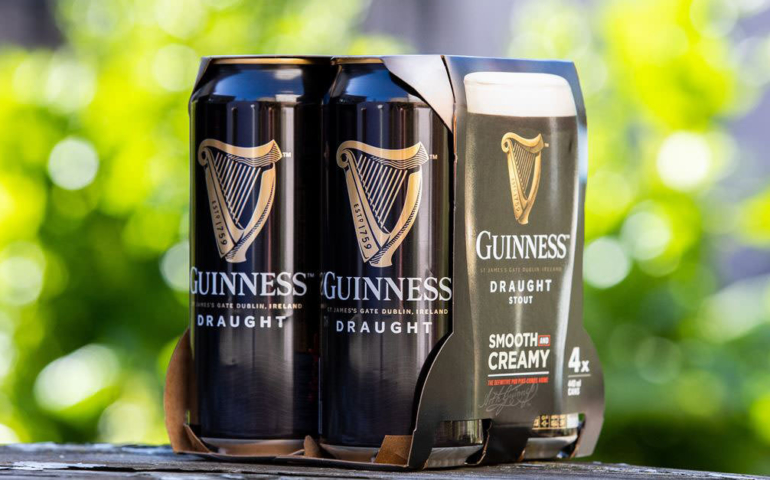 Diageo, the world’s largest spirits company and owner of Guinness, has announced plans to remove plastic from its beer packaging. In doing so, the British drinks company becomes the latest beverage brand to ditch plastic and move towards using only sustainable packaging.

In a statement on Monday, Diageo said it was investing £16 million ($21 million) to reduce the amount of plastic it uses in the packaging of all of its beer brands. As well as Guinness, Diageo’s beer portfolio also includes Harp, Rockshore, and Smithwick’s.

The company will replace the plastic ring carriers used to bind multipacks with recyclable and biodegradable cardboard. The sustainable packaging will first be introduced in Ireland in August 2019, with the U.K. and other international markets set to follow in summer 2020.

Diageo says less than five percent of its total packaging is currently plastic, and the initiative should reduce its plastic waste by more than 400 tonnes annually — “the equivalent of removing 40 million 500-milliliter plastic bottles from the world.”

While it might lead the way as one of the drinks industry’s largest brands, until now, Diageo has been lagging behind its competitors in the sustainable packaging field.

In September 2018, the Carlsberg Group announced the launch of the Snap Pack, a sustainable form of packaging it claimed would reduce plastic use by as much as 76 percent. Shortly after, in November 2018, Corona followed suit and announced it was trialing eco-friendly, plastic-free six-pack rings.

Diageo’s announcement is “good news for the brand, for our wider beer portfolio, and for the environment,” Mark Sandys, the Diageo’s Global Head of Beer, said.