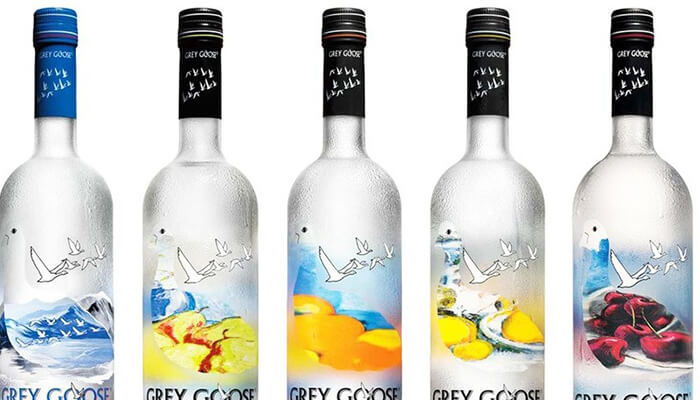 If you have ever been to a fancy club, bar, or restaurant or even have a swanky friend, it is likely you have heard of the quality Vodka brand Grey Goose – but have you ever wondered what makes it so ‘elite’?

The label was founded in the summer of 1996 by businessman Sidney Frank with his recipe expert (or Maître de Chai) François Thibault, in the French commune of Cognac. The intention was to create a luxury vodka brand for the US market.

Grey Goose, produced with water derived from the natural springs in Cognac, is filtered through limestone & made from winter wheat grown in Picardy.

The Beverage Testing Institute named Grey Goose the best-tasting vodka in the world in 1998, and in 2004, the company sold to Bacardi for $2.2 billion US dollars. That same year, the company sold over 1.5 million cases, making it the best-selling premium vodka brand in the United States.

So, we ask, what contributed to the brand’s grandiose success?

We will touch on the unique distilling techniques shortly, however, an interesting perspective is given in the economist, Thomas J. Stanley’s, well-researched book – Stop Acting Rich (2009).

Stanley describes Grey Goose as a preference drink to the Americans he terms as “aspirationals” (i.e., “those who like to act rich”, despite income or wealth and spend larger amounts of money on cliché items).

He claims that the explosive growth (within a few short years) is partly due to it being perceived as a drink of the economic elite – even more so than Rolex or Mercedes Benz.

Typically, the price of alcohol is a reflection of its processing methods.

The classic raw materials used being wheat, barley, and rye and extend to others like potatoes and even grapes. It can really be made with any grain the producer chooses and unlike some other spirits, can be produced anywhere in the world.

This makes it a vast and varied category of liquor.

By law, it must be distilled at least 95% – 96% abv. In order to achieve this, it is often distilled at least three, some even five (like Grey Goose) times or more. By distilling a spirit to such a high strength, little of the character of the base material remains. The assumption is that the more times it is distilled, the cleaner and smoother it is.

As the vodka is passed through the still, the ‘heads’ and the ‘tails’ are removed and the ‘heart’ (the part of the distillation found in the middle of each batch) is kept & used for the product, thus the smoothness & purity.

They are then diluted with water to give a bottling strength of 20% abv, the type of water used, which will change the liquids’ mouthfeel.

So, how is Grey Goose different?

First off, the wheat sourced from Picardy is that of winter wheat, which has 10 months to grow, unlike summer wheat with 6 months. This is soft wheat as opposed to hard wheat, and this “superior-bread making wheat” is reserved for Grey Goose. This is better for distilling according to Thibault.

The wheat is milled four times within 24 hours, special enzymes are used to break it down and fermentation is not batch-processed, like in other distilleries. Instead, continuous fermentation occurs over six cascading tanks. The remaining liquid is then distilled five times in column stills.

The water added during bottling is full of calcium as it comes from a well 500 feet deep below the bottling plant, where the soil is full of limestone.

So, what is the price of Grey Goose compared to other vodkas?

As we can see, the processing techniques above could contribute to the higher price bracket of Grey Goose. Here is a table of the current prices in the US marketplace:

But how about comparing these to other brands? Let’s take a quick look:

The calories in your party drinks, are derived from both the alcohol content of the liquor and whatever you’re mixing into it. When it comes to calories, you are generally safe with Grey Goose (as long as you opt for a low sugar mixer like soda water).

Along with most brands of Vodka, it is 80 proof, which means it contains 40% alcohol. There are few brands that are 94 or 100 proof; which contain more calories.

According to Columbia Health, each 80-proof vodka drink contains about 64 calories, however as shot sizes vary, your standard drink may contain up to 96 calories or above.

As with most vodkas, you can substitute one for another and most people would not be able to tell a difference. However, If you’re serving drinks to a connoisseur, then you’d better make sure you’re using a premium brand – like Grey Goose.

Here are a few, not so common, recipes using Grey Goose Vodka:

Cherry Noir On The Rocks

Pour over ice in a rocks glass

What are some of your favorite Grey Goose recipes? Please share in the comments below.