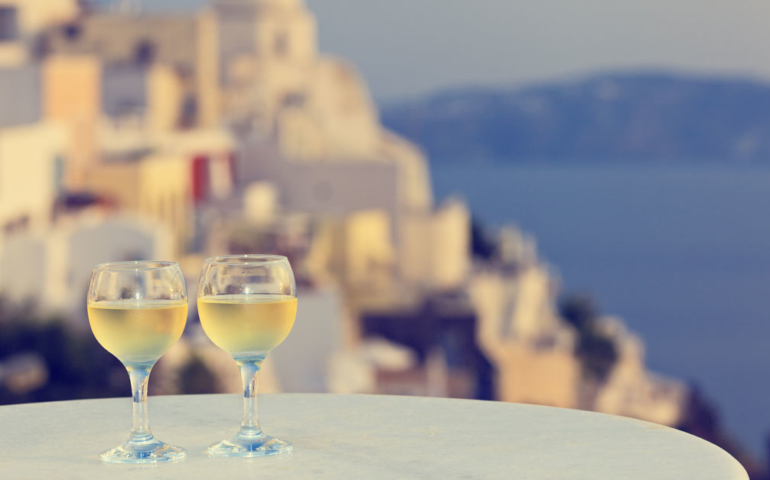 In a February 2019 article, “Greek Promise,” wine luminary Jancis Robinson wrote that the Mediterranean nation “ticks all the right boxes” when it comes to up-and-coming wine regions.

Those who follow drinks trends have heard these claims before. For several years, Greece has been dubbed wine’s “next big thing.” In 2015, Forbes described Greece in just four words: “Tough economy, great wine.” Two years later, the Independent declared Greek wine to be “officially having a moment.”

Now it’s 2019, and wine writers are once again crowing about Greece. This time, however, a variety of factors are occurring simultaneously and collectively elevating Greek wines from pet favorite to major player.

Moreover, international palates have collectively evolved to favor “terroir-driven” wines that defy homogeneity and represent the regions in which they were made. This happens to be something native varietals like acidic Assyrtiko, aromatic Moschofilero, full-bodied Agioritiko, and structured Xinomavro each perform particularly well.

Greece’s oenological history began more than 4,000 years ago. The nation once supplied more than 10 million liters per year to Gaul, the region we now call France. Greece also established the first vineyards in modern-day Provence, Sicily, and the Italian peninsula.

By the early 1980s, however, Greece was reeling from hundreds of years of political and economic setbacks, including multiple centuries of Ottoman occupation, the Great Depression, two world wars, a military junta, and a series of financial crises.

Winemakers also had phylloxera to contend with. The microscopic pest arrived in Greece at the end of the 19th century, a few decades after it ravaged the rest of western Europe. Many growers were forced to replant indigenous grapes with French varietals grafted onto American rootstock. (The island of Santorini notably remains phylloxera-free, and houses ancient vines.)

When Andrea Englisis started working at Athenee Importers, America’s largest Greek wine importer, in the late ’90s, she struggled to sell anything made with indigenous grapes.

“The majority of [Greek] wines back then were Chardonnay, Cabernet, and Merlot,” she says, most of which were sold in niche markets specifically targeting Greek-American consumers.

These consumers started shying away from the likes of Chardonnay and Cabernet around the turn of the 21st century, she says, demanding indigenous wines instead. This market shift coincided with a new generation of winemakers refocusing on Greek varietals and improving quality.

“There was a lot more attention to vineyard work,” Englisis says, with winemakers reducing yields to increase complexity and flavor intensity.

In 2010, Greece’s financial crisis meant that export markets, once an afterthought, were suddenly vital. Winemakers and importers began paying closer attention to their packaging, especially the inconsistent transliterations on English-language labels. The grape variety Xinomavro often appeared as Xynomavro, for example, and multiple spellings were sometimes used on the same label.

“Santorini, in particular, was a beacon of that,” he says. White grape Assyrtiko originated on the volcanic island and today produces the nation’s most popular wines.

“Two-thirds of our Greek business is white wine,” Mike Osborn, Wine.com founder, writes VinePair in an email. “[It’s] lead by Assyrtiko, which was 40 percent of our Greek wine sales.”

Assyrtiko is now going global. Peter Barry, a winery manager in Australia’s Clare Valley, first tasted Assyrtiko during a 2006 vacation to Santorini. He was so enamored with the variety that he started proceedings to import cuttings to his homeland. Barry’s winery released Australia’s first commercial Assyrtiko in 2016.

Global enthusiasm for natural wine also works to promote Greek wines to many contemporary consumers. Soultanos believes that Greece’s close association with the “natural” wine movement helps it appeal to a younger demographic of drinker. “Natural wine creates a platform for Greek wine,” he says.

But, much like natural wine, whether or not Greek wine is actually “having a moment” probably depends on where in America you live and drink. New York City, for example, has a robust international wine scene and recently welcomed Milos, a Greek wine bar, to its $20 billion real estate development, Hudson Yards. Helen Greek Food and Wine, an upscale restaurant in Houston, has an extensive, all-Greek wine list.

Greek wines remain largely unfamiliar to drinkers in many corners of the country, though. When New York Times’s Eric Asimov selected Assyrtiko for his “Wine School” column in 2015, some readers felt slighted. “Wines like these are simply not going to be available in 95 percent of the country,” wrote a commenter with the handle “Leading Edge Boomer” in Santa Fe, N.M. “Nevertheless, have a fine time, N.Y.C. people.”

Fortunately, many quality bottles are available online for national delivery. Below are some of our favorites.

Fermentation with native yeasts and a period of skin contact adds complexity and savory notes to this unique Assyrtiko. Average price: $28.

The article Greek Wine Is Trending, Depending on Whom You Ask appeared first on VinePair.