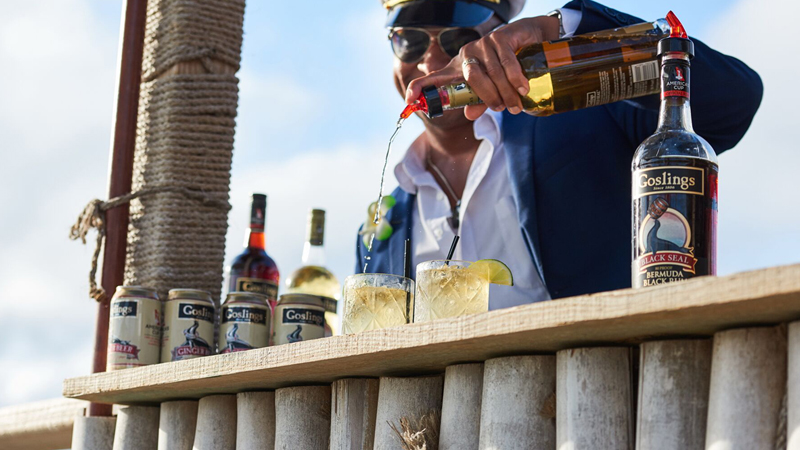 Not every country has a national cocktail, but Bermuda most certainly does: the Dark ‘n Stormy®. And just as the drink is intrinsic to the island nation, Goslings Rum is, too.

“It’s synonymous with Bermuda,” says Goslings Rum CEO Malcolm Gosling. Goslings are the island’s oldest business and have been a staple of Bermudian culture since it was founded by James Gosling in 1806.

Gosling says the aged black rum is even used in an island tradition called “roof wetting” where the roofs of new buildings are christened with a bottle of Goslings instead of Champagne. In Bermuda, roofs are important for collecting rain (the only source of drinking water on-island) and diverting it into cisterns for use by homes and businesses. Of course, the rum tastes much better in a cocktail than it does dripping from roof tiles.

These days, it’s rare to find a spirits brand that remains independent and family-owned, but Goslings is now run by the seventh generation, with five members of the eighth generation also working for the company. For Malcolm Gosling, this remains a source of pride. “Our name is on that bottle, and we’re going to do our utmost to ensure that we’re producing a quality product every time,” he says.

This award-winning product is Goslings Black Seal Rum, a blend of distillates sourced from several Caribbean islands (Bermuda does not have enough arable land to grow its own sugarcane). The Goslings recipe remains a carefully guarded secret, but the family says it has changed very little since its creation. The rum is blended and aged in Bermuda in re-charred ex-bourbon barrels from three to six years. This time spent in-barrel imbues the rum with its deep flavor and notes of vanilla, caramel, and dried fruit. And the island’s tropical climate helps to accelerate the aging process, as the heat and humidity maximize the interaction between the rum and the wood.

Initially, Black Seal was simply known as “Old Rum,” and was sold to customers straight from the barrel. Starting in the early 20th century, the rum was sold in used Champagne bottles (a favorite drink of British naval officers at the time) and sealed with black wax. Hence the name “Black Seal.” A nod to this history can be found today with the premium expression Family Reserve Old Rum, an extra-aged spirit that is bottled in a black wax-sealed Champagne bottle much like the days of old. This decadent sipping rum uses the same recipe as Black Seal, but it’s aged between 16 and 20 years, putting this rich and earthy spirit on par with a fine Scotch or Cognac.

The flagship Black Seal can be used in a whole variety of applications, but it is a crucial component in the Dark ‘n Stormy®. The name of this iconic cocktail, a simple and refreshing mix of Goslings, ginger beer, and fresh lime, was trademarked by the company back in 1980. This year, in honor of the 40th anniversary of the drink, Goslings has established International Dark ‘n Stormy® Day, to be celebrated every June 9 here out. Sure, you can mix another rum with ginger beer, says Gosling, but it will taste different than the cocktail made with Goslings Black Seal Rum. So, if a bar or restaurant wants to call it a Dark ‘n Stormy® it should necessarily be made with Goslings.

Goslings play an important role with the bartender community, which has embraced the Black Seal rum (and its lighter sibling, Gold Seal) as a spirit that can be used in many different types of cocktails, including tiki classics like the Jungle Bird and the Mai Tai. It provides the right balance of depth and character that appeals to both novices and spirits aficionados. “Whether I am mixing with it on its own in a stirred or shaken cocktail or layering a mix of rums it always manages to add complexity with its depth and versatility,” said Erick Castro, “Bartender at Large” podcast host and proprietor of San Diego bars Raised By Wolves and Polite Provisions. “The spicy notes of brown sugar and cinnamon that it brings to a drink are unmistakable and could not come from any other rum out there.” Castro is also a fan of Goslings Family Reserve Old Rum but recommends sipping that rather than mixing it.

Brown spirits have been on a meteoric rise in popularity over the past decade, fueled by the explosive growth of bourbon. Drinkers are becoming more adventurous and crossing over into other categories, with aged rum being an obvious choice. “Bourbon allowed [a new] generation to experiment with other aged spirits,” said Gosling. He acknowledges that the rum category overall is a bit unwieldy because it is made in so many different countries, each of which has its own regulations. Goslings’ mission is to maintain a consistent standard of taste that consumers can depend on.

In 2019, Goslings introduced its ultra-premium Papa Seal Single Barrel Rum. “It’s dramatically different from anything we’ve ever done,” said Gosling. “It allowed us the opportunity to experiment with conditioning the barrel prior to aging the rum,” which is the most he will reveal about this special process. This extremely limited expression is aged for more than 15 years in the balmy Bermuda climate, with production limited to just 12 barrels annually. Goslings is now working on some other limited-release bottlings, like a special barrel-finished rum. “It’s sleeping as we’re talking now,” says Gosling.

As Goslings continues to innovate and look toward the future, it stands firmly rooted in its long history and tradition and continues to focus on making affordable, high-quality rum that can be enjoyed neat, on the rocks, or mixed into your favorite drink. Goslings Black Seal remains an iconic brand, not just in the history and culture of Bermuda, but, indeed, in the category of rum globally.