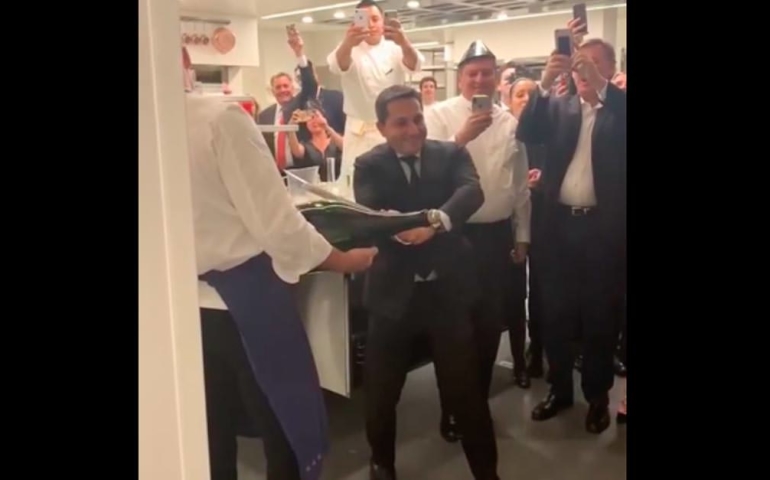 Sabering Champagne is an impressive spectacle, perfect for special occasions like New Year’s Eve. Unfortunately, as the staff of Napa Valley’s three Michelin-starred French Laundry restaurant found out this week, things can go awry when trying to pry the cork off a highly-pressurized bottle of wine using an ornamental sword.

A recent video posted on Reddit shows the restaurant’s general manager Michael Minnillo unsuccessfully sabering a Nebuchadnezzar (15-liter bottle) of Champagne. According to the video’s poster, u/splashtonkutcher, the bottle in question was a $2,000 Billecart-Salmon brut.

Minnillo enlists the help of a staff member to hold the giant, party-sized bottle, while he identifies its seam and lines up his saber to take a swipe. With his first swing, the general manager removes part of the bottle’s lip, but, crucially, fails to dislodge the cork.

With several, subsequent failed attempts, Minnillo appears to lose patience and starts hacking at the bottle like an Amazon explorer armed with a machete. The bottle explodes, showering a crowd of onlookers with expensive sparkling wine and large shards of glass.

Thankfully, it seems as though everyone emerged from the incident unharmed, if slightly red in the face.