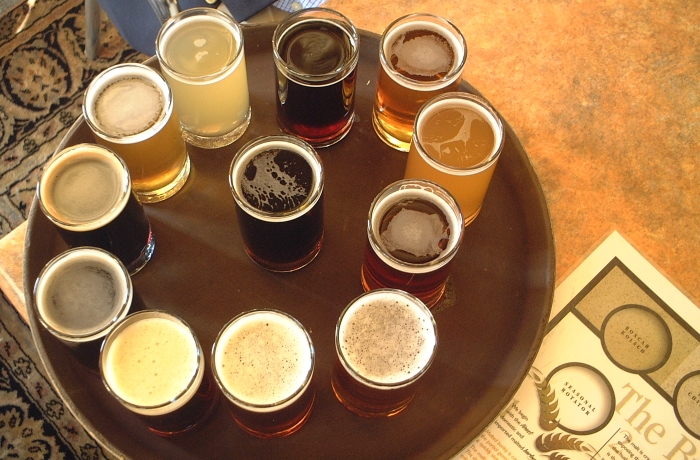 When a Denver friend first took me to the city’s Wynkoop brewpub back in 2002, he introduced me to the manager and one of the brewpub’s co-founders, John Hickenlooper. He was lanky and charming. Hickenlooper had trained as a geologist but when he got laid off due to the decline in the local oil industry he decided that running a craft brewery would be much more fun. He went in with three friends to open Colorado’s first brewpub in 1988.

It seems amazing to think that back then, just thirty years ago, the only brewery in the whole of Colorado was Coor’s, in Golden. Mind you, it was and still is the world’s biggest brewery. The Wynkoop’s location on 18th Street was known as Skid Row, and the rent was a rock-bottom $1 per square foot, but it was all that the four guys could afford. The Wynkoop was the start of the area’s revitalization, and SkidRo is now LoDo, or Lower Downtown, a thriving area of shops, restaurants and quite a few more brewpubs.

The Wynkoop was also the start of Hickenlooper’s own revitalization. In 2003 he became Mayor of Denver, when he relinquished his co-ownership of the brewpub. To celebrate his election Hickenlooper organized a party at the Wynkoop. Unfortunately he forgot to apply for the special license that was needed for a private event and the party was dry.

He stayed on as Mayor until 2011 when he became Governor of Colorado. Now he is said by friends to be seriously considering a Democratic run for President in 2020. If he wins I’ll be telling friends: “I met the President when he ran a bar.”

In 2014 he took President Obama to the Wynkoop for a meal, a game of pool and a glass of Rail Yard, a malty amber ale that has been one of the pub’s best sellers for over twenty years. Sadly the President didn’t get to sip another of the Wynkoop’s specials, Rocky Mountain Oyster Stout.

That one was definitely on my own wish list when I visited the Wynkoop again recently, for a tour and a tasting. Incidentally, Rocky Mountain oysters are not a type of bivalve, but rather a surprisingly popular delicacy made from… a part of the cattle one probably wouldn’t think to actually eat. They’re known in Canada as “prairie oysters” and by other names in other parts of the world, including “cowboy caviar”. I first tried them at Denver’s oldest restaurant, the Buckhorn Exchange, which was founded in 1893. It was a stroke of genius by someone at the Wynkoop to make a beer flavored with them. It started as an April Fool’s joke in 2012, but the demand was so great and the taste turned out to be so good that the stout is now a regular on the beer list. But would I get to taste some?

My guide is the Wynkoop’s Brewery Ambassador, CJ Fischler, who begins by offering me a glass of, well, Donut Beer. “This is a blonde stout,” CJ says, “flavored with espresso coffee and donuts. It’s a definite breakfast beer. There are 100 donuts per barrel of beer, which we get from our local donut shop.” I’m skeptical, but the beer is a refreshing way to start a tour. It was light, it was unusual, and it wasn’t too heavy on either the donut or the espresso, though for me, coffee is a natural flavor partner for certain beers.

We set off on a behind-the-scenes tour of the Wynkoop’s brewing operation, and CJ confirms their history.

“The building was built in 1899 and was originally the J. S. Brown Mercantile. It’s hard to believe now but this really was Skid Row when we started in 1988. Back then there was Union Station, the Oxford Hotel, and us. People thought John Hickenlooper was mad to open here. They thought no-one would come, but it was the start of the redevelopment of the area.”

Thirty years on and Colorado is set to hit 400 craft brewpubs sometime in 2018.

“We use about 25 different varieties of malts, and 25 of hops,” CJ says as we wander round the maze of rooms, trying to keep out of the way of waiters rushing around carrying trays of beer and/or food. We go into a barrel storage room. “We have rum, tequila, bourbon and other types of barrels that we use for aging,” CJ tells me. “We have to have barrels that have been kept in use, and we get them from Laws Whiskey House, right here in Denver.”

We head back for the tasting room where CJ pours one of those barrel-aged beers, a Cabernet Saison, aged for fourteen months in cabernet barrels. It’s 7.5% ABV, and the effect of the barrels is shown in a fruitiness in the taste, an unusual mix of apples, strawberries and melon that gives both freshness and a slight sweetness.

After sampling a LoDo-style IPA, CJ then delights me by producing one of my other favorite beer flavors: chile. He pours me a Patty’s Chile Beer, which is flavored with Anaheim, serrano and ancho peppers, but while it has a bite to it, it isn’t overly hot. I have to admit to a little disappointment with this one. Living in Arizona, I like my chile beers to pack more of a punch.

My disappointment is short-lived, though. When CJ asks if there’s anything else I’d like to sample, it’s Rocky Mountain oyster time! He disappears to the bar and returns with a foaming glass of black beer, looking very like a pint of Guinness. It’s thick and chewy, every bit as good as I’d hoped, and tastes richly of coffee and chocolate.

“Can you taste the nuts?” CJ asks me with a straight face, and it takes me a few seconds to get the joke.

The Wynkoop is at 1634 18th Street, right across Wynkoop Street from Union Station. For opening hours and times of brewery tours, please click here.