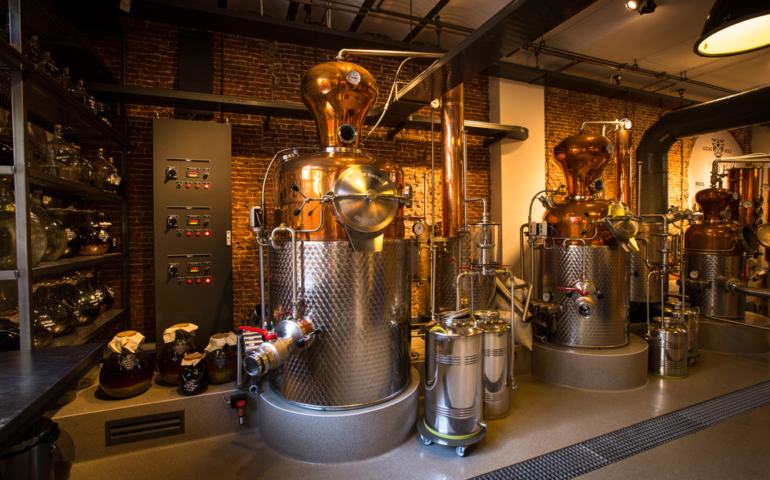 If you’re planning a trip to Amsterdam, these distilleries in and within reasonable traveling distance to the city are well worth a visit.

The first thing I learned in Amsterdam was that I’ve been saying “genever” wrong. The historic spirit (also sometimes spelled “jenever”) was a favorite of early cocktail visionary Jerry Thomas, who used it in 20 classic drinks in the third edition of The Bon Vivant’s Companion, yet it’s only had brief fits of popularity in the modern cocktail renaissance. Speaking with someone after I landed at Schipol Airport, I mentioned how little genever (or june-nuh-ver, in my California-tinged pronunciation) I had tried. It’s pronounced gin-knee-ver, I was quickly informed. In my head, I apologized to the man in the airport customs booth who was confused about which june-nuh-ver distilleries I came to the country to see.

In it’s heyday in the 1800s, the Netherlands was swimming in genever. Schiedam, a town just west of Rotterdam that served as the genever production capital, had 250 distilleries alone. It was exported and consumed around the world, including the U.S. Then came World War I, Prohibition in the U.S., and World War II. Production and exports sank, and despite its continued popularity in its home country, Americans all but forgot about it. Now, a few of the distilleries are making a push to restore genever back to its original, worldwide cocktail glory days.

If you visit Amsterdam and surrounding towns for yourself, you can get a taste of the history and the modern movement. Using the Netherland’s capital as a base point, here are five genever distillery experiences to try:

Bols is one of the largest genever producers in the world. In 2008, it was also the first to really push for U.S. bartenders to start using the spirit again. Since most trips to the Netherlands start in Amsterdam, there’s no better place to also start a genever trip than with Bols. The majority of production is done outside of the city, but there are a couple ways to see the distilling process without wandering too far. The first is the Lucas Bols Distillery in the Red Light District. There you’ll find three small stills where genever is made. Right next door is the Wynand Fockink tavern, where you can drink the same genever made in the distillery as well as a huge selection of different liqueurs.

For a more modern—and expansive—take on the Bols Experience, you can hit the House of Bols in the museum district of Amsterdam. The museum tells the history of spices in the Netherlands, and how world trade impacted Dutch food and drink in the 15th, 16th and 17th centuries. There’s a cocktail bar at the end of the tour that shows how the spirit is being used by bartenders today.

Dordrecht is a quick hour-long train ride from Amsterdam’s central train station. Near the town center, you’ll find Rutte & Zn (Rutte and Sons), a small and intensely intimate distillery that makes historic genevers and a wide variety of liqueurs. The brand started in 1872 and was passed down through the family until Myriam Hendrickx joined. Just a month after, Hendrickx took over operations as the master distiller and modernized the distillery while also honoring its history.

Today, the front of the building is a shop that looks much like it did in the 1900s. There are regular tours that take guests to the back of the distillery to explore the many distilled botanicals. Hendrickx started an initiative to clean out the top floor of the building, and she, along with historians from a nearby museum, unearthed reams of documents. Some of those documents hold original recipes for genevers and liqueurs, others tell the story of what the Netherlands was like from the mid-1800s to present day. That history is displayed on the walls and in a room full of old books.

For fans of distilling, it’s hard to beat a trip to the distilling room at Rutte. The still is squeezed into a back corner, and the ceiling is open to allow the column to stretch into the second floor. Like the majority of genever distilleries, Rutte only distills the botanicals, not the grain or neutral spirits. Also like other genever distilleries, Rutte makes a lot of different liqueurs. That means on the four days a week that Rutte runs the still, the entire building is filled with the smell of the herbs or fruit currently being distilled down. Visiting Rutte is a history lesson, modern distilling lesson, and trip to flavortown all in one.

House of Herman Jansen in Schiedam

Rotterdam used to be one of the major distilling cities in the Netherlands. Regulations forced the distilleries out, and much of the industry moved to nearby Schiedam, which became known as the home of genever. The distilling scene is just a sliver of what it once was, but Herman Jansen, which started in 1777, is a place you don’t want to miss. Herman Jansen makes the Notaris line of genevers as well as Bobby’s Gin and Bobby’s Schiedam Jenever.

Notaris is one of the only genever distilleries using 100 percent malt (rye, corn, and barley) for the base spirit. Most use neutral spirit that’s much lighter. By law, genever only has to be made with 15 percent or less malt to be labeled “jonge,” or young. Anything with more than 15 percent is called “oude,” or old style, giving genever producers plenty of room to play around with ratios. Herman Jansen also one of the only distilleries to make its malt spirit on site rather than solely distilling the botanicals and sourcing malt spirit from another location.

The house distilled Bobby’s genever is a blend of Dutch and Indonesian flavors: the malt spirit on the Dutch side, and the spice bill on the Indonesian side. Bobby’s is named after Jacobus Alfons, who went by “Bobby” and moved to the Netherlands from Indonesia in the 1950s. His grandson, Sebastiaan, found a bottle of genever in 2012 that once belonged to Bobby, and inside was his grandfather’s “home blend” of genever and Indonesian spices. In 2016, Bobby’s Schiedam Jenever—a new style genever with 4 percent malt—was born.

You can visit Herman Jansen and see both the old and new malt stills as well as the windmills that used to power the many Schiedam distilleries.

This is the place to go for a history lesson and a little taste of something extra. The Jenever Museum is just down the road from the House of Herman Jansen in Schiedam. It’s a full museum with records detailing the long history of genever, from its rise and influence around the world to today. There’s also a working genever distillery on site to see distilling in action. It’s the only genever distillery that still uses coal to heat its stills, and one of the only distilleries in the world that does so.

The Netherlands is only about twice the size of New Jersey, but if you tell someone in Amsterdam that you’re traveling north to Groningen, you’ll be treated like you’re making a journey for the ages. Don’t let that get to your head, though, as it’s only a 2 hour trip. That’s just the right distance for a day trip—something that Amsterdam is encouraging tourists to do when visiting the incredibly over touristy capital city.

The Hooghoudt distillery in Groningen makes a genever sold in the U.S. under the De Borgen name. It has a long history dating back to 1888, but today the distillery is a modern marvel of distilling, and the only one that focuses exclusively on genever. The full range of new style, old style and malt genevers are made at the independent Hooghoudt distillery. The latter uses 57 percent malt that’s aged in Oloroso Sherry casks, and is sure to win over any whisky drinker.