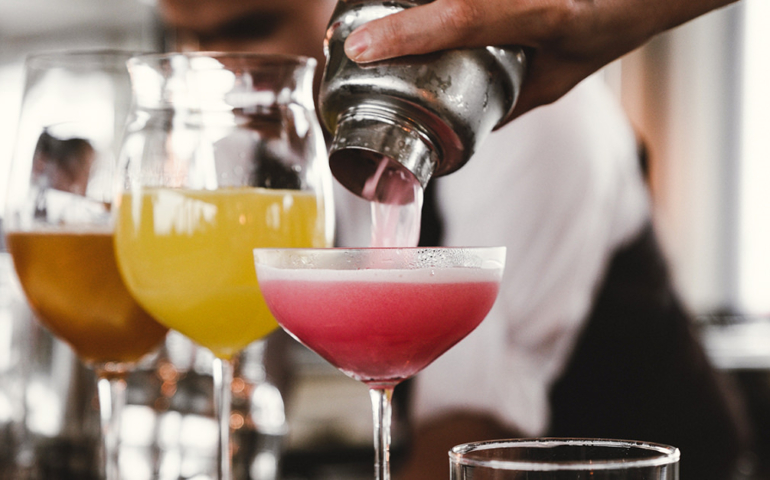 As the drinks scene has grown and transformed, so too have its classic cocktails, though many of the changes to these tipples occurred long before craft cocktail bars and bespoke spirits rose to their current prominence. Whether ingredients and methods shifted because the booze changed (often for the better), drinkers’ palates evolved, flavors went in and out of fashion or a combination of the above, these nine drinks have evolved beyond their original forms.

These drinks started out with different ingredients or preparations than what we’ve become accustomed to in modern times. See how they’ve changed.

“It’s a dramatic change,” says Bartley, adding that the reason MacElhone made the change isn’t known but confirms that based on a taste comparison between the recipes the newer version is indeed an improvement over the original.

“I think that gives you a platform that’s more luxurious, and it’s actually faster and cleaner to do in a bar—definitely an improvement that has been made over time,” says Cannon. “This is a better version of that drink, and that’s how things change; when it’s a sexier, cleaner version, people copy it.”

The Daiquiri is another drink that has gone from being made one way into becoming a different version of the same idea—and then back again. In this case, it became frozen and filled with all sorts of fruity flavors during the cocktail nadir between the second World War and the revival of the craft cocktail bar. But that version of the century-plus-old Daiquiri has become so widespread that many imbibers don’t realize it was a simple cocktail to start with. In Havana in the late 1800s, a Daiquiri was a way to showcase rum by mixing it with lime and sugar, served up—a style to which cocktail bars have returned.

“The Daiquiri is an institutional drink; it may change its face or clothes but maintains its essence,” says Jackson Cannon, the owner of The Hawthorn in Boston. “I think it kind of has an amazing place right now, and there are some great ways to do it and some bad ways.”

“The Mojito has gone through a bit of a shift from being shaken with mint and topped with club soda to now, where people are crushing the ice and swizzling it with muddled mint and sugar,” says Marrero. The different preparation has altered the drink some, though the base of this boozy refreshment remains the same.

While that’s disputable—most cocktail bars nowadays shun any sort of prepackaged mixes—it certainly was the case for decades before the current cocktail revival. Torres chalks it up to the wave of technology in the 1960s. “Americans were fascinated with space-age and science, and you start to see, not just in drinks but also in food, a lot of things in production and constructions,” he says. That’s when the sour mix entered the picture, an ingredient that removed the need for expensive citrus and made the mix shelf-stable. Fortunately, most cocktail bars have now transitioned back to using fresh fruit juice in the drink, as the recipe originally called for.

It’s also worth noting that the drink started out sweet and with as much vermouth as what we now call a 50/50 Martini. A bartending tome from the 1890s, “Cocktail Boothby’s American Bar-Tender,” calls for equal amounts of gin and sweet vermouth. Over the years, drinkers switched to dry vermouth, and trends began to call for much less of it. Winston Churchill, for example, was reported to merely fill his glass with the cold gin and “nod in the direction of France.” But the fashion has changed once again, back to a more vermouth-heavy style, with a five-to-one or sometimes three-to-one ratio of gin to dry vermouth. “The shift to a more well-balanced Martini has made that drink more approachable,” says Marrero.

That’s where American rye came in, and now most Sazeracs feature this spirit (often alongside cognac), plus a rinse of absinthe or Herbsaint, a sugar cube, and a lemon twist.

Over time, the cocktail morphed into a lemon juice, powdered sugar, gin, and Champagne drink, as “French” also got tacked on to the name. The latter version first appeared in Harry Craddock’s “The Savoy Cocktail Book” in 1930. Today, the powdered sugar has been replaced with simple syrup, and the whole delicious thing gets served in a flute glass.