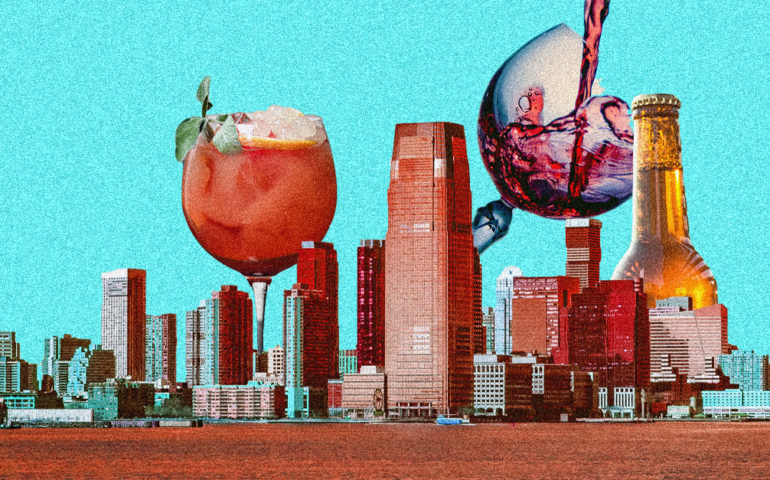 Forget what you think you know about the drinking culture in the great state of New Jersey. It’s not just bar brawls and shore shenanigans — especially not in Jersey City.

Located just across the mile-wide Hudson River from midtown Manhattan, this city of 300,000 is a destination in its own right. Its genuinely fun bar scene spans natural wine bars, a craft distillery, beer and cider destinations, and cocktail dens. An affordable housing market provides creative energy and local pride, and the city’s welcoming vibes contrast with the cookie-cutter, reservations-only Instagram traps across the river. Here, a guide to drinking your way around Jersey City.

Before Jersey City exploded with a never-ending parade of new bars and restaurants, most of us would toss ‘em back at pubs like Pint, known for its craft brews, and O’Leary’s Publik House, whose out-of-the-way address has kept it a local favorite for the ages.

These days, beer lovers have much more at their fingertips, including Departed Soles, a brewery in the Powerhouse Arts District launched by Brian Kulbacki in 2014. (It’s the only brewery in town.) When it opened, a lot of buzz orbited around its gluten-free beers, including a signature pour that has evolved over time. GoodbIPA: Four My Homie, now in its fourth iteration, is a properly bitter brew with floral and citrus notes.

In the Heights neighborhood, which runs along the eastern edge of the city, Fox & Crow has gained popularity for its calendar of live music (from rock to bluegrass) and its dynamic drinks menu. The beer selection includes your solid IPAs and lagers to more adventurous finds like the winter-ready Southern Tier Choklat stout and Hollows & Fentimans’ ginger beer.

At three-year-old Wurstbar, a smorgasbord of sausages (from duck to kielbasa), poutines, and burgers accompany an equally varied and oft-changing inventory of beers, ciders (there are over 40), and beer distillates. The beers on offer take you all over the world — from Czech lagers and Jersey lambics to German kolsch — and the selection of cider has grown considerably since Wurstbar opened in 2016 with just 12. Now, it’s become one of the state’s most exciting destinations for the stuff, which has made it a great partner for many of the country’s (and the world’s) top producers, who recognize the bar’s stature by sending it kegs you might not be able to find anywhere else. Try the in-house Wurst Cider, a dry, sparkling made from four different apples made in collaboration with the Finger Lakes’ South Hill Ciders.

Every restaurant with a liquor license serves wine, and, of course, some lists are more specialized than others. Chef Dan Richer’s renowned pizzas at Razza are complemented with a curated selection of Italian whites and reds, like a Chardonnay from Friuli or Piedmont Barbera. Over at Madame Claude Bis, you can have your fill of a variety of French vins, including an unexpected sparkling Cabernet Franc from the Loire Valley’s Château de Minière or Domaine Cottebrune’s Les Moulins Blanc, a blend of Roussanne, Grenache Blanc, and Vermentino.

Two of the city’s most talked-about wine destinations, Frankie and PS Wine Bar, focus on the natural. The former is a beautifully appointed, Australian-inspired restaurant with a robust wine menu covering everything from a Pet-Nat from the Finger Lakes’ Bloomer Creek to a Greek orange wine. There’s also a section devoted to Australia, where one of the owners is from, especially Adelaide Hills, with standouts like the Slint Chardonnay by Ochota Barrels, a cult favorite due to its textural depth and long, elegant finish. The Barossa Valley is represented with a 2018 Sands Grenache by Dave Geyer that’s floral, bright, and pairs exceptionally well with the kitchen’s addictive grilled prawns drizzled with Nam Jim sauce.

At PS Wine Bar, a lively underground hangout where rowdy guests mill around balancing delicate stemware, you’ll find natural European producers at accessible price tags. The bar staff might describe the Montuni Frizzante by Il Folicello as an excellent alternative to Lambrusco — light, spicy, effervescent, and exactly what you’d want to drink when facing a plate of cheese during happy hour. Or go for Diwald’s juicy but rustic Zweigelt from the Wagram region of Austria.

In 2017, Corgi Distillery — the first spirits operation in Hudson County— opened in Jersey City’s Bergen-Lafayette neighborhood, located a mile from the Grove Street PATH station. Occupying an old industrial building along a light rail track, Corgi produces everything from floral gins to a small-batch potato-based vodka with a lovely creamy mouthfeel. The Earl Grey gin is so flavorful, you might sip it neat and understandably think there are other ingredients mixed in your glass. Because the on-site bar can only serve spirits made on-premise, the bartenders get pretty creative. Try the Birmingham Blush, a riff on a mezcal-based grapefruit-flavored Margarita, in which jalapeño-infused Earl Grey gin and a bit of vodka are blended with a house-smoked “essence” to mimic the smokey profile of mezcal.

Between the Journal Square and Grove Street PATH stations is basement-level tiki bar Cellar 335, where a tropical party with a hip-hop soundtrack awaits. Shareable, Asian-inspired dishes like charred edamame, beef-cheek baos, and a spicy cornbread slathered with toragashi-spiked butter dominate the menu. Drinks include tiki classics and large-format punches.

Down Newark Avenue, there’s The Archer, a whiskey-obsessed, low-lit boîte with a lodge-chic theme that’s reinforced by the kitchen’s love for game meat. The owners have lost count, but there are hundreds of whiskey labels at the bar, including rare Orphan Barrel selections, a couple different years of High West BouRye as well as yearly releases of the Midwinter Night’s Dram. Cocktails here are overseen by award-winning bartender Natalie Jacob, who plays around with age-old drinks, whether it’s by elevating historic recipes or transforming the classics.