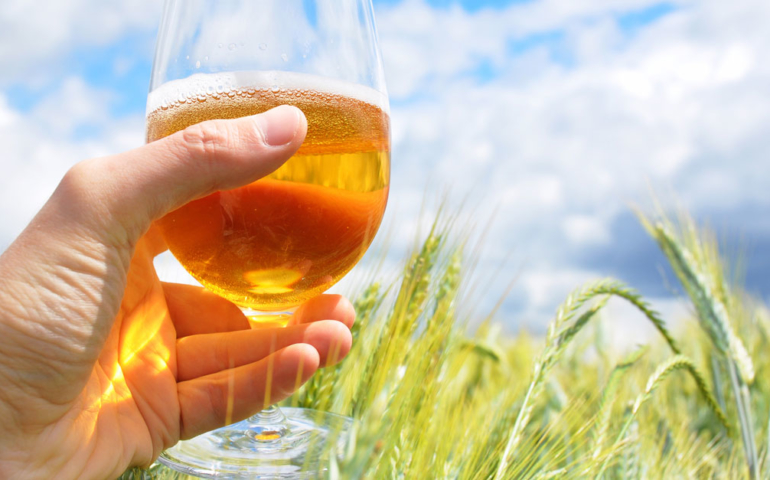 At the debut of its Area Two fermentation and aging facility in March 2019, Two Roads Brewing welcomed visitors with Table Terroir, an ale made with 100 percent Connecticut-grown ingredients and yeast captured in the brewery hop yard. This delicate table beer joins a list of terroir-driven brews made with ingredients grown or harvested within a brewery’s own property or state.

The most extreme are known as estate beers and are produced by top craft breweries like Sierra Nevada and Rogue, as well as many smaller farm breweries. Each brings attention to the drinkable details of a brewery’s homeland, and provides a contrast to the complex supply chain of hops, grains, malt, and yeast that characterizes most mainstream and craft brewing operations. (A “local” pilsner, for example, may be brewed at your neighborhood brewery in the Northeast, with hops from the Yakima Valley or New Zealand, grains from the Czech Republic, and yeast from an off-site lab.)

On a grand scale, estate beers are practically nonexistent. “You don’t see it often,” Daina Cheyenne Harvey, faculty, College of the Holy Cross, and editor, Humanity & Society, tells VinePair. Harvey’s specialties include “locavore” food, beer, and agriculture. He is a contributor to the book “Untapped: Exploring the Cultural Dimensions of Craft Beer,” and is currently involved with several projects related to the ecology of craft beer.

Though many appear to champion the locavore movement, he says, “it’s pretty rare all the ingredients are locally sourced items.”

“A few factors go into why breweries would want to grow 100 percent of ingredients on site,” Jess Baker, editor in chief of CraftBeer.com, tells VinePair. “Craft beer is often about creating an experience for beer lovers that goes beyond taste. Enjoying a beer at a brewery taproom or patio where you’re within eyeshot of where the beer’s ingredients were grown brings a new layer of romanticism to the beer-loving experience.”

Some might call it the fear of missing out. “There’s a FOMO component as well, in that you don’t want to miss out on this thing that can only be produced this one time in this one way,” Harvey says.

Rogue Farms in Independence and Tygh Valley, Ore., grows 10 hops varieties, two malting barleys, rye, and several fruits to use in Rogue Artisanal Ales. It also harvests its own honey, used in beers like its Honey Kölsch.

In 2005, Sierra Nevada planted an experimental hop yard hoping to harvest its own hops for beer. It released the first Chico Estate Ale in 2008. The hop yard now has 10 acres of certified organic, Salmon Safe hops that are used in its annually anticipated Estate Harvest IPA. In 2010, Sierra Nevada’s Estate Ale used barley from its certified organic 100-acre farm of two-row barley, which also includes rotational crops and nitrogen-fixing cover crops.

ThirstyBear Brewing, an FDA-certified organic brewpub based in San Francisco, released its Locavore Ale in 2010. The experimental beer was made with barley from nearby Eatwell Farm in Dixon, Calif., and hops from Hops-Meister near Clearlake, Calif. The cost to ship and malt the grain halted the project, so Ron Silberstein, founder and head brewer, came up with a solution: Create California’s first malting facility.

Silberstein launched Admiral Maltings in 2017 with Dave McLean, founding brewmaster of Magnolia Brewing Company, and Curtis Davenport, head maltster. It was the first small-batch barley floor-malting facility to open in the state since Prohibition.

“Back in the day, every area grew barley, malted it, and used it in their local beer. We’re just rediscovering what was done before [by] going back to a more sustainable, local economy,” Silberstein told me in an interview in 2016. “That’s why I’m doing it. I love the fact that the farmers are getting into it again. I think it’s exciting and good for the environment.”

In 2015, Pike Brewing of Seattle became the first in the state to release beers with Washington-grown-and-malted barley with its Locale series. Pike partnered with Skagit Valley Malting, Washington’s first malting facility, to highlight heirloom varieties of barley and other grains. Each beer in the series was named after that grain, such as Pike Locale Copeland. “Just like wine is named varietally — a Napa Valley Cabernet Sauvignon, for example —this is a Skagit Valley Copeland,” Finkel said in an interview.

If beer made with locally grown ingredients is hard to come by, “estate beer is kind of like the next level,” Harvey says. He believes this is also part of their appeal. “We don’t expect brewers to be farmer/growers, but a lot of people like when the extra component does exist,” he says. In some ways, Harvey adds, it closes the gap between beer and wine. “People are rooting for beer to be seen in the same way as wine,” he says.

Although the West Coast is home to some of the world’s best hops and barley, both of which have been grown there for generations, the local movement has made its way east. Sprague Farm and Brew Works in Venango, Pa., claims to be the only brewery in the state making estate beers with its own hops, barley, and malt. Virginia’s Lickinghole Creek Craft Brewery grows wheat, barley, hops, berries, and pumpkins on its 290-acre farm, and Milkhouse Brewery at Stillhouse Farm in Airy, Md., uses its own hops and sources other ingredients “in our neighborhood and state to enhance the local character of our brews,” it says on its website.

Similar feats are achieved by Jester King in Austin, Tex., Stoneman Brewery in Colrain, Mass., and Plan Bee Farm Brewery in Poughkeepsie, N.Y. Plan Bee sits on a 25-acre property that produces hops, grains, fruits, and honey from its own bees. The honey also provides wild yeast and other microbes for the brewery’s coolship beers. Co-founders (and spouses) Emily and Evan Watson knew they wanted to build an estate brewery from day one.

“There a lot of breweries that are brewing locally, but we just didn’t feel like that was enough,” Emily Watson, Plan Bee co-founder, told me in 2015.

An offshoot of estate beers is foraged beers. As quirky and primitive as they may sound, foraged beers are “in huge demand,” Harvey says. Scratch Brewery in Ava, Ill., was an early proponent of the practice. North Carolina’s Fonta Flora and Fullsteam breweries similarly comb the landscape for forgeable ingredients, such as herbs, botanicals, and fruits.

Hill Farmstead head brewer Vasilios Gletsos started his own operation, Wunderkammer Bier, in 2016. The scarcely available beers are based on foraged recipes. Harvey, who interviewed Gletsos for an ongoing project, says “the way [Gletsos] and people talk about what he’s doing is reminiscent of that esteem for Thoreau and the early environmentalists … a connection to place and land and doing things a certain way.” That connection to place and history appeals to community-minded brewers.

Baker believes brewing estate-grown beers, like feeding one’s family from a homegrown garden, “brings a sense of gratification” to brewers. “Brewing beer, like cooking, is an art,” she says. “When breweries grow ingredients on site, being able to create a beer from grain to glass provides a similar sense of accomplishment.”

The article Estate Beers Are Rich With Terroir and Bragging Rights appeared first on VinePair.