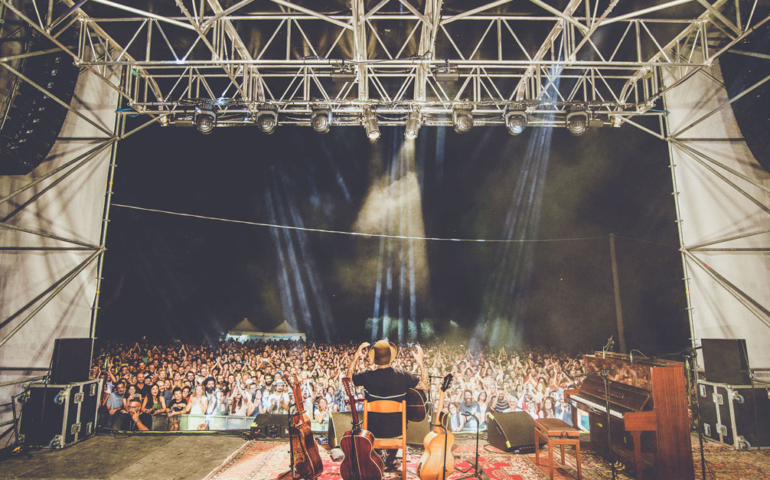 The jazzy hip-hop stylings of R+R=NOW, a group somewhat similar to the Roots, fill the air above the hills of Locorotondo, Italy during its annual Locus Festival. About an hour south of Bari, in southeastern Italy, Locorotondo has hosted this summertime celebration to all things Puglia for 14 years.

The crowd is happily nodding and bouncing along as the night turns to early morning. Glasses of Tormaresca Calafuria, a rosato from Puglia’s Salento peninsula, are ceaselessly poured and refilled.

The Locus Festival brings together regional live music, art, wine, and food in an attempt to establish Puglia on the international stage. Tormaresca, an Apulian winery created by the Antinori family in 1998, is majorly committed to the cause.

The Locus Festival is a celebration of all things Puglia. Credit: Facebook.com/locusfestival

“Everything we’re doing is to show the feel, and the vibes, of Puglia,” Vito Palumbo, brand manager of Tormaresca, says. Tormaresca sponsors the annual summertime celebration, working to gain traction with the younger local generation as well as the wine world at large.

Palumbo works for Tormaresca but may as well represent the whole of Puglia. There’s seemingly nowhere nearby you can go where people do not know Vito. His boundless enthusiasm is single-mindedly directed toward the goal of shifting the region’s reputation.

Puglia is hungry to reinvent itself. Formerly known as the “cellar of Europe,” providing bulk wine as opposed to highly touted labels, Puglia’s viticultural history is thousands of years old. Now, forward-thinking winemakers like Tomaresca, Polvanera, and San Marzanoare are embracing native grapes and modern techniques to reinvigorate the ancient region.

“So much has been taken from here,” Palumbo says, and then adds, laughing, “It’s revenge time.”

Puglia’s dry heat, fertile soil, and proximity to the Adriatic and Ionian Seas — and their winds — make it versatile agriculturally. Chardonnay, Cabernet Sauvignon, and Syrah are all grown throughout this region, as is reportedly 50 percent of Italy’s olive oil. Burrata, the tender cheese, hails from Puglia as well.

Native grapes such as Aglianico, Fiano, Negroamaro, Nero di Troia, and Primitivo also flourish here. These fruits and their wines better express Apulian terroir, according to industry members, and their bottling speaks to a growing international market.

“Now it’s all about quality, and giving an identity of Puglia to the wine,” Palumbo says. “This obsession with quality is all to show that things have changed in Puglia.”

Tomaresca introduced such modern practices as insulating jackets around its stainless steel fermentation tanks to control against temperature swings. Palumbo jokes that heat and humidity are the two major enemies of Tormaresca’s wine production, and, as such, even relatively straightforward modernization efforts go a long way.

For another look at Primitivo, consider the San Marzano Sessantanni Primitivo di Manduria. San Marzano’s 60-year-old bush vines are put to use for a bold wine crossing complex spice and jammy notes that will hold up to a hearty meal or stacked charcuterie board with some of Puglia’s aforementioned food specialties.

“Aglianico has been our obsession,” Palumbo says. “It’s a very challenging grape. The tannins are ‘nervous,’ and it’s all about taming the grape. Taming this wild horse that is the Aglianico.”

Rather than blend away the unique characteristics and even imbalances of a grape such as Aglianico, Tormaresca embraces them. The grape is one of the primary reasons why Antinori invested in the region. “To combine their Tuscan know-how with indigenous Puglian grapes,” Palumbo says.

Masseria Maime is Tormaresca’s larger operation. With approximately 350 hectares of vineyards, it accounts for 90 percent of the label’s production. Cliffside and adjacent to the sea, the vineyards there benefit from a strong summer sun, a steady seaside breeze, and limestone-rich soil. The stars of the show at Maime are Negroamaro and Primitivo.

If the Locus Festival was designed as Puglia’s coming out party, and a way to introduce the best of the region to the rest of the world, then it’s done a hell of a job. You don’t need to buy a plane ticket, though, to toast its ingenuity. Sip on one of the bottles below to get a taste of what Puglia has to offer.

The Locus Festival has been held for 14 years. Credit: Facebook.com/locusfestival

Five Wines From Puglia to Try

Puglia is Italy’s largest producer of rosé, and this Tormaresca bottle is made with 100 percent Negroamaro. It is floral, with vibrant stone fruits balanced by acidity. Average price: $14.

This Negroamaro from Salento is well stocked with deep earthiness and lush, dark red fruits. The bottle is boosted with six months of French oak preceded by concrete tank aging for 24 months. Average price: $17.

Made primarily from Chardonnay matured on lees in oak, along with 10 percent Fiano, Pietrabianca is slightly buttery with crisp, tropical fruits. Average price: $19.

A great way to sample both the grape and terroir, this bottle is made with 100 percent Aglianico from Bocca di Lupo in Castel del Monte. Tannic with a medium body, offering dark chocolate, spice, berries, and a lightly tart quality. Average price: $46.