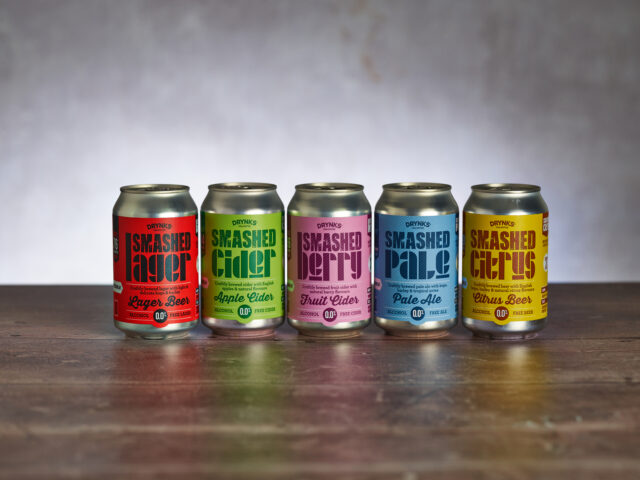 Manchester-based Drynks Unlimited has added two new products to its 0.05% ABV ‘Smashed’ range after securing a £125,000 investment on the BBC’s Dragons’ Den.

The drinks brand, which was founded in 2017 by ex-Halewood marketing director Richard Clark, is launching Smashed Pale Ale and a Smashed Berry Cider this month.

Available in both 330ml bottles and cans with an RRP of £1.99, the two new expressions will join the three products in the producer’s existing Smashed range: Smashed Lager, Smashed Cider, and Smashed Citrus.

Clark alongside UK sales director, Paul Briscoe, appeared on an episode of Dragons’ Den, which aired back in March. The pair walked away with an investment from Sara Davies, the owner of Crafter’s Companion, of £125,000 for 7.5% equity.

Founder and managing director of Drynks Unlimited, Richard Clark, said: “So much has happened since we appeared on Dragons’ Den in March. We launched Smashed in Booths and we’ve already overtaken big, established brands, such as Peroni, San Miguel and Budweiser in terms of units sold, proving that consumers really do buy into those specialist, high quality NoLo brands.

“Consumers are currently looking for quality alternatives to alcohol without having to sacrifice taste and experience. This is the perfect time to invest in NPD and build more differential choice that deliver genuine excitement. We can, and are, driving genuine growth to the sector by offering quality drinks which suit a raft of different occasions; food, driving, work, health and sport.”

Smashed Pale Ale is described as “light and refreshing” with flavours of caramel, toffee and tropical fruit. Smashed Berry is said to be purple in colour and is a “sparkling fruit cider with a fruity, fresh, clean nose”. The taste is described as both sharp and refreshing with “strong forest fruit flavours followed by hints of English cider and a firm cider astringency to finish”.

According to data published in December 2019 by CGA, sales of no and low-alcohol drinks in the on-trade rose by 48% in 2019, to be worth around £60 million. The market researcher also noted that there had been an 80% rise in alcohol-free options.

Alcohol-free brands in the UK and US have reported record sales in the off-trade during the Covid-19 pandemic.

Last October, Drynks announced that it had spent £1 million building a de-alcoholisation kit to improve the quality of its alcohol-free beer and cider. The brand said that its cool vacuumed distillation (CVD) kit was the first of its kind in the UK.

All drinks in the Smashed range are vegan, gluten-free where possible, low in sugar and contain under 100 calories. They are available to buy in Booths stores as well as online via the Drynks website, as well as Zeroholic.co.uk, Drydrinker.com, and a range of local independent retailers across the UK.