If one were to attend the Cucurbitaceae family reunion, they’d have to feel slightly sorry for the humble cucumber. Unlike its cousins, the squash and zucchini, neither cucumber’s flavor nor texture improve upon cooking. At 95 percent water, it’s pretty bland in its raw form. And compared to the watermelon, its cousin on the fruit side of the family, cucumber is nowhere near as attractive, sweet, or flavorful.

But if you take the knobbly fruit — which is almost always misidentified as a vegetable — and look at it as a drinks ingredient, things change drastically. Cucumber’s subtle yet versatile flavor makes it a worthy addition to a number of spirits, beers, cocktails, and mixers.

In 1999, marketing guru Steven Grasse debuted Hendrick’s Gin. The spirit was designed to evoke thoughts of an English garden, and is infused with rose and cucumber essences after distillation.

Gin and cucumber are frequent bedfellows, of course. Cucumber is a popular addition to cocktails like gin Collins, Pimm’s Cups, and even Gimlets or Gin & Tonics. When sliced, the once-ugly fruit transforms into an attractive garnish, providing refreshing flavors and an inviting appearance.

At Major Food Group’s Pool Lounge in Manhattan, the ingredient takes center stage in a drink once voted “Sexiest Cocktail in NYC.” Created by former director of bar operations Thomas Waugh, the cocktail, simply called “Cucumber,” mixes house-infused cucumber absinthe with lime juice and cane syrup, and is served in a coupe glass that has been carefully lined with delicate slices of baby cucumber.

Brad Nugent, The Pool Lounge’s current beverage director, uses cucumber to add structure to cocktails. “It brings some sweetness and some tannins, whether you use the skins or not,” Nugent says, and its subtle flavor can add layers and complexity.

Cucumbers also play starring roles in certain styles of beer, particularly goses and berliner weisses. The fruit is often matched with lemon or lime, as in offerings from Westbrook, Folksbier, and Urban South.

“Cucumber’s flavor is so soft and light that it tones down [goses’] acidity, rounds out the flavor, and makes it pop,” explains Alex Flores, head brewer at Urban South brewery in New Orleans. For its Lime Cucumber Gose, the brewery juices organic cucumbers, removes the skins, seeds, and pulp, and then adds to the base beer after deaerating the juice. (This step is crucial, as the oxygen added during juicing can be detrimental to the flavor and stability of beer.)

Goses aren’t the only style in which cucumber succeeds. “I think it can work well in lighter beers and saisons — anything barrel fermented, really,” Flores says. “Even in a pale ale, if you were using some really bright Centennial hops, which tend to have a lot of lemon, lime, and grapefruit flavors, it would work.” 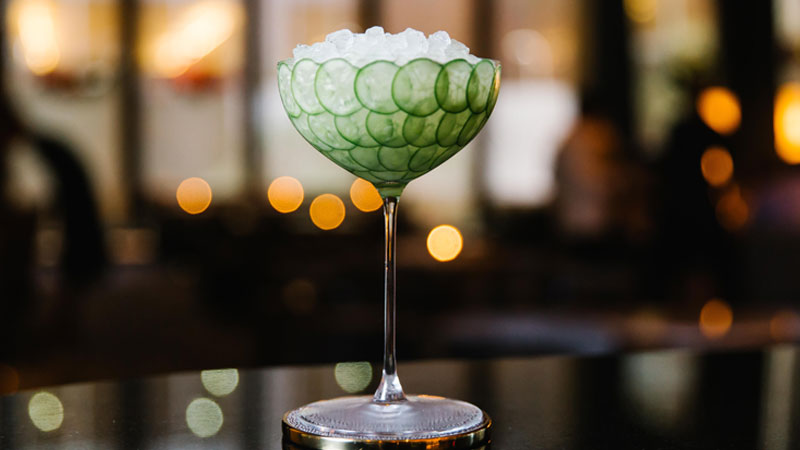 This iconic cocktail by Thomas Waugh admittedly takes time and a precise hand to prepare the glass with cucumber slices. But the end result is visually stunning and more than makes up for the effort.

The article Cucumbers Are the Beer and Bar Worlds’ Ultimate Summer Crush appeared first on VinePair.