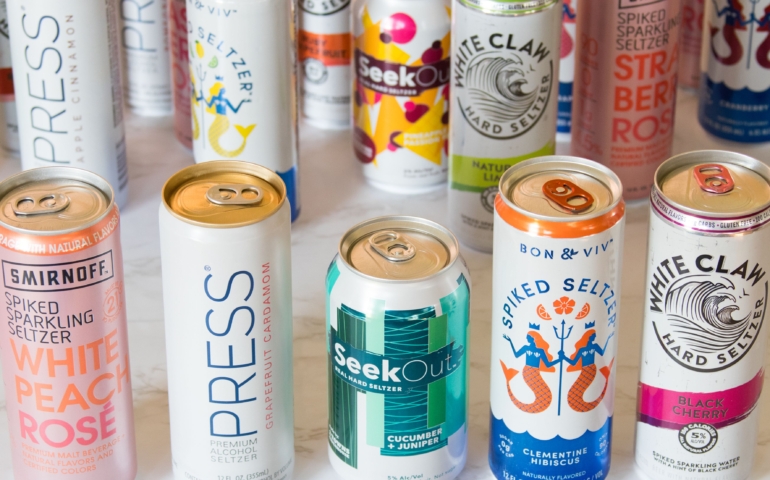 Smirnoff, Anheuser-Busch, Corona, Sam Adams — these are just a few of the powerhouses that have recently joined market giant White Claw aboard the hard seltzer express. And while the big guys have been engaged in a dead heat to conquer America’s bubbly future, microbrewers were quietly dipping their own toes into the same enticingly spiked waters. And their efforts are beginning to pay off.

“It was probably three years ago that we started dabbling in producing a hard seltzer,” recalls Jen Whyte, one half of the husband-wife duo behind Southwest Florida’s Fort Myers Brewing. “About a year before we released them we were almost there, but there was still a cloudy element to it, a little bit of an aftertaste. We tried a few different yeasts before we finally settled on what we’re using now. From that point, it was another year before we were really, really proud of the product.”

All of that scrutiny, trial and error, and tinkering resulted in a crystal clear beverage with just the right amount of fruitiness balanced by a burst of crisp carbonation. The use of real grain and that special top-secret yeast strain contributes to the seltzer’s extra-appealing zero-carb, zero- sugar, 90-calorie makeup.

“We have a lot of health-oriented people coming into our taproom,” Whyte says. “To create something lower in calories, lower in carbs, zero sugar — that became a real draw. Light beer can do the trick, but sometimes people want something that’s even lighter than a light beer. Seltzer is refreshing, it’ll easily quench your thirst.”

Whyte and her team initially planned to can just two of the team’s dozen or so flavors, which run the gamut from orange and watermelon to mojito and the forthcoming cherry limeade. But with the COVID-19 shutdown all but drying updraft sales the demand for packaged booze, specifically packaged hard seltzer has skyrocketed.

“It flies off of our shelves in our taproom. We can’t keep up with it,” Whyte says. “Especially in this new normal, it’s a good problem to have. Now we’ve got five in cans and we’re planning to package at least two more. That’s been one of the silver linings in all of this.”

So keep your drinking dollars local this summer by picking up a handcrafted alcoholic seltzer from one of these standout craft producers.

Available in an ever-expanding range of hot weather-friendly flavors like a mojito, strawberry-lime, and watermelon, these ultra-refreshing 5% ABV bad boys weigh in at just 90 calories, 0 carbs, and 0 sugar. The slim cans also sport a pretty slick, straight-forward graphic treatment — a very intentional move, as Whyte explains. “The designer we worked with talked about how he loves hard seltzers but doesn’t love telling people that he loves them,” she notes. “He wanted a can he would be proud to walk around holding at a party or an event.”

Pure cane sugar and 100% real fruit serve as the base of this Connecticut stalwart’s new 4.5% ABV spiked seltzer line, contributing to the liquid’s bold flavor and distinct bright color. Depending on flavor — raspberry, grapefruit, or cranberry-lime — you’re looking at 95 to 115 calories, two to three grams of sugar, and two to four grams of carbs a pop… literally.

This DC craft phenom took the market by storm when they dropped these 100-calorie, 5% ABV bangers back in November 2019. Variations include mango, black cherry, and raspberry limeade, but the real standout is POG, a tribute to Hawaii’s surfer-approved signature passionfruit, orange, and guava juice blend. Cowabunga, dude.

What started as a playful jab at the hard seltzer craze quickly blossomed into a hit product when thirsty New Yorkers discovered that their local Euro-transplant’s wise-ass release actually tasted fantastic. Marshmallows were the unlikely secret ingredient behind the initial 4.5% ABV iteration, providing the self-proclaimed “pastry seltzer” with a fluffy, delicate sweetness akin to a crisp cream soda. Follow up flavors run the oddball gamut from the scoop shop-inspired strawberry egg cream and blackberry-raspberry-vanilla to cherry cola and a wine-based Lambrusco number.

Locally sourced fermented orange juice gives this California original its unmistakable pep, imbuing cold-pressed flavors like blackberry, cranberry, grapefruit, and lime with a sturdy freshness and zesty finish. At 5% ABV with no added sugars and a mere 100 calories, cracking open of these is as fragrant and relaxing as a boozy stroll through a blooming orchard.

Longtime can champs Oskar Blues have done it again, this time without the gluten. Dubbed Wild Basin and bearing a two-tone outdoors-inspired label, the handsome 12-ouncers are available in classic lime, lemon agave hibiscus, melon basil, and cucumber peach and run just 100 calories each with zero grams of sugar.

The cheeky folks that brought you Basic Vodka are behind this formidable 4.5% ABV, 90-calorie contender in the small-batch hard seltzer game. And with enticing flavors like cranberry, Pamplemousse, and a curiously herbaceous cucumber chiller (which plays very nicely with gin, just saying) are deceptively far from basic.