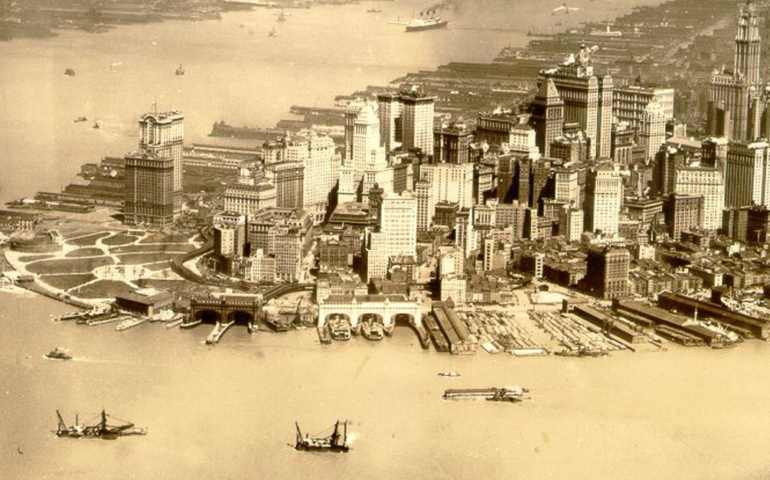 Manhattan’s familiar grid of streets and avenues is far younger than New York City. Proposed in 1811, it took more than half a century to actually build out all the way up to 155th Street.

What came before the grid? Farms and large swaths of slowly developed land, crossed by two large north-south roads, one of which would eventually be called Broadway. A traveler on Bloomingdale Road (today’s Broadway), the Bowery, and the east-west arteries of downtown Manhattan would find all sorts of businesses, and bars and taverns were the most common — especially in the less developed parts of the island.

VinePair dug through the New York Public Library’s collection of 19th-century (and earlier!) images to bring to life 14 long-forgotten outposts of inebriation.

The Bull’s Head Tavern On The Bowery, Between Bayard And Pump (Now Canal) Streets, 1783

Head over to Manhattan Unlocked for a lengthy history of 50 Bowery and other nearby buildings. During construction of the current hotel at this address, remnants from the Bull’s Head/King’s Arms/Atlantic Garden were discovered.

If the name of this venue rings a bell, you’re probably familiar with its later incarnation, a large vaudeville theater located near Herald Square.

Barney Flynn’s, On The Corner Of Pell Street And The Bowery, Showing Chuck Conners (With Cap) And Typical Frequenters Of A Bowery Saloon, 1899

Atlas Obscura has a full history of the building that housed Barney Flynn’s. Here’s a quick preview:

The Edward Mooney House, located in the heart of Chinatown, is considered the oldest surviving row house in New York City. Its long, storied history is just as colorful as its eye-catching red exterior.
…
Since then, the building has housed an eclectic mix of tenants including a tavern, brothel, general store, hotel, restaurant, pool room, and a Chinese club. Most notoriously, however, was its stint as Barney Flynn’s Saloon, a popular hangout for sporting men, gang members, and political hacks in the early 1900s.

The saloon was also the headquarters of Chuck Connors, a local celebrity nicknamed the “Mayor of Chinatown” for his slumming tours of the neighborhood.

If Temple Street doesn’t sound familiar, that’s because it no longer exists. Forgotten NY has a nice history of the street and its eventual removal.

Ephemeral New York was able to dig up a description of this tavern from a book printed in 1911:

“It was a favorite road-house for those who drove out upon the Bloomingdale Road (Boston Post Road) … the drivers of the day used to come as far as the Buck’s Horn, then turn through the quiet and shady Love Lane to Chelsea, and thence by the River Road through Greenwich Village and back to the city across the Lispenard meadows.”

Ephemeral New York has the backstory on the Shakespeare Tavern:

From its earliest days, New York has never lacked for places to drink. One of the city’s most famous bars was the Shakespeare Tavern, at the corner of Nassau and Fulton Streets.

In the early 19th century, the Shakespeare — “distinguished for the superior character of its refreshments” according to one source — hit its stride as a gathering place for poets, writers, and actors . . . as well as the politicians, merchants, and wannabes who like to hang around them.

The three story clapboard roadhouse was built in the 18th century and was located on the southeast corner of 11th Street and 6th Avenue. Originally a private home, it eventually became a saloon know as The Hawthorne. The 11th Street side of the building was covered in a gnarled old grapevine and by the early 1800s the establishment was simply known as the Old Grapevine.
…
During the Civil War it was a popular hangout of Union officers and Confederate spies. Later, when the Jefferson Market Courthouse was built the local lawyers and politicians would gather there to talk business. Artists and actors also met there. It was the ideal place to get news and information, or in the case of spies and politicians, the ideal place to spread rumors and gossip, leading to the popular phrase “heard it through the grapevine”.

The Daytonian in Manhattan blog discovered a description of this tavern in the same 1911 text recalling the Buck’s Horn Tavern:

Stephen Jenkins, in his 1911 The Story of Broadway, noted “It was a favorite road-house on the Bloomingdale Road.” A notice in The New York Herald on May 9, 1844 announced “This beautiful place of resort, opposite Madison square, corner of 23d street and Broadway, is opened for the season, and Palmer’s omnibuses drive to the door[.] It is one of the most agreeable spots for an afternoon’s lounge in the suburbs of our city. Go and see.”

Aside from being a stopping place for coaches, Madison Cottage offered diversions. Later The Sun wrote “Here gathered the sports of the middle of the last century, arranging cock fights and dog fights, prizefights, athletic contests and games of the day.”