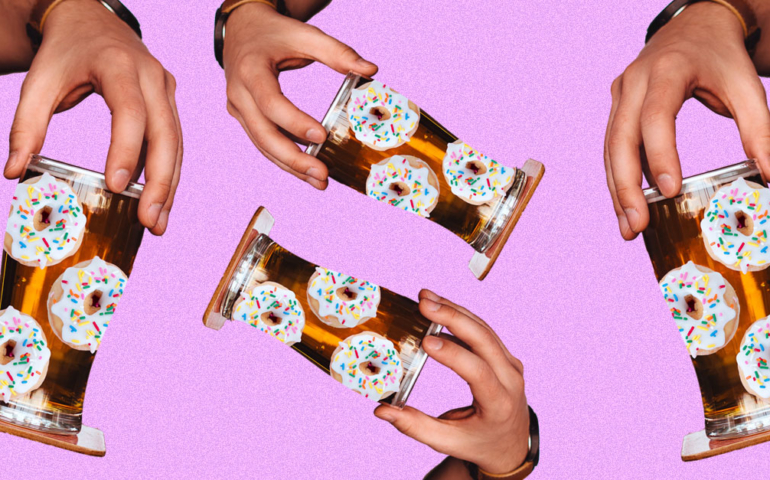 On March 16, 2019, Brooklyn’s Other Half Brewing hosted Pastrytown, an event it described as “an adjunct fantasyland.” The festival invited attendees to taste “a world of sweet and savory flavors baked into your favorite brews,” poured by more than 30 of the country’s most sought-after craft brewers.

It may seem like Pastrytown exists in a completely different universe from Big Beer’s #corntroversy, the advertising beef-turned-lawsuit between frenemies MillerCoors and Anheuser-Busch. After all, one is a super-trendy celebration of a popular beer style in Brooklyn, and the latter is litigation between multinational conglomerates over something as categorically uncool as corn syrup.

What unites these two entities is a shared emphasis on ingredients. Adjuncts are anything added to a beer beyond malted barley, yeast, water, or hops. These days, as in years past, adjuncts occupy a broad conceptual space in the beer world.

“There’s a long-standing tradition of [a beer consumer who] hears ‘adjunct’ and immediately wages the war of macro-beers versus micro-beers,” Josh Waldman, brewmaster of Elysian Brewing, a brand owned by Anheuser-Busch InBev, tells VinePair. “We all know people who say adjunct lagers are the bane of the craft world,” but this “quality judgement” is starting to shift, he says.

As craft brewers continue to create and celebrate hazy IPAs, pastry stouts, and all manner of experimental and traditional beer styles, from spontaneously fermented fruited sour beers to classic witbiers, how we perceive adjuncts and the beers they flavor has little to do with brewing science and everything to do with storytelling.

What Are Adjunct Beers Made Of?

A 500-year-old German beer law, the Reinheitsgebot, prohibits any extraneous ingredients in the brewing process. This includes alternative grains, such as wheat, rye, oats, corn, and rice, as well as other supplementary sources of sugar.

“Generally, ‘adjuncts’ refer to fermentable sugar sources used in concert with malt,” Darwin Goh, beer reviewer and Certified Cicerone, writes VinePair. Additionally, “adjuncts may refer to other additions that are not necessarily fermentable, but add to the flavor or body of the final product.” This includes spices, fruits, and lactose, a non-fermentable sugar used in milk stouts and milkshake IPAs.

Until recently in the U.S., the term “adjunct beer” typically referred to adjunct lagers. “These beers are viewed with much disdain by the craft industry because they may be seen as employing a cost-cutting measure and an industrialized process of brewing,” Goh writes. Craft beer pioneers of the 1980s differentiated themselves from less flavorful lagers by brewing all-malt beers, focusing on quality and transparency of ingredients. And yet, Goh adds, “the use of adjuncts is still extremely pervasive in many craft beer styles.”

Arguably the best-known breeding ground for adjunct beers as of late is the pastry stout. “[T]he style generally refers to an imperial stout that is sweet, thick, high in alcohol, and loaded with ingredients to imitate, as one would guess, a ‘pastry’ in liquid form,” Goh, who attended Pastrytown, writes. “To reach the style’s intense sweetness and mouthfeel, the brewer may construct a beer to finish [with] high residual sweetness, leaving more sugars in the beer, or in many instances, utilize lactose.”

Some common ingredients in pastry stouts include vanilla, cacao nibs, coconut, and coffee, “but the possibilities are endless,” Goh adds.

The beer industry’s demonization of one type of adjunct over a plethora of celebrated others comes down to marketing.

“Brewers are becoming the storytellers,” Waldman says. Prior to joining Elysian in 2012, Waldman brewed at Magic Hat, the craft establishment known for its apricot-flavored #9 ale. Elysian’s most recent release, Salute the Sun, is a pale ale conditioned on sun-dried black limes.

“You don’t often hear about barley growers or maltsters … [because] they don’t have a product that people eat or enjoy directly,” Waldman says. ” However, he adds, if a brewer tells their customers, “‘I brewed a beer with Voodoo Doughnuts,’ then you’ve got this whole cool story that you’re managing to tell as well.”

Miller Lite’s use of corn syrup is technically no worse than Other Half’s use of Corn Flakes, Golden Grahams, or Cocoa Puffs — all of which contain corn — nor Bud Light’s use of rice. One brewer’s corn syrup is another’s Corn Flakes — and how either tastes is dictated by what we’re told about it.

“I think when [brewers] have either hidden, or not told, or subverted that story of their ingredients, that’s probably where people get a little caught up in it and find that to be a little less palatable,” Waldman says.

The Success of Excess

While the world’s largest brewers battle over corn syrup, craft brewers are making critically and commercially celebrated adjunct beers. These are seen as liquid celebrations of creativity, not cost-cutting initiatives or corporate sniping.

“Craft brewers have taken that principle of freedom in brewing to employ almost anything imaginable as an ingredient in beer,” Goh writes. “Pastry stout is just one culinary example of that craft attitude, sprinkled with excess and playfulness.”

The article Corn Syrup, Spice, and Everything Nice: What Adjunct Beers Are Made Of appeared first on VinePair.