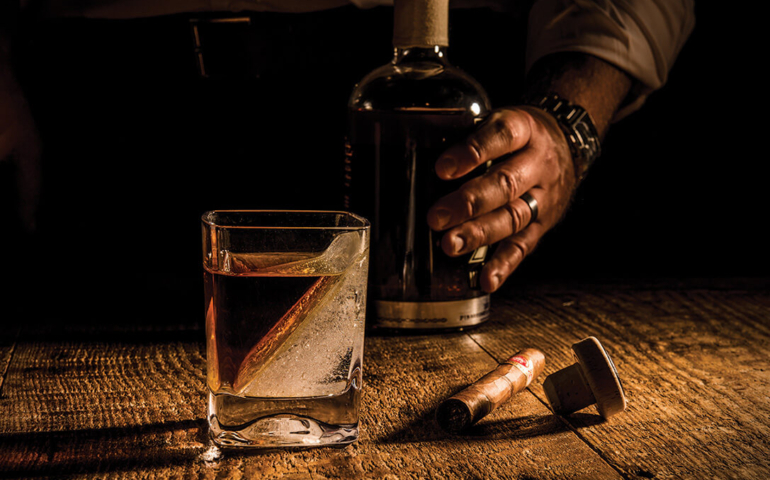 At first glance, the Whiskey Sour seems like a relatively straightforward cocktail. It’s a combination of three elements: whiskey, citrus, and sweetener. That delicious trio, however, is the result of centuries of history, beginning with sailors who mixed spirits and citrus on long voyages to prevent scurvy and seasickness. It wasn’t until the drink reached the land that bartenders thought to add sugar to give the cocktail some balance.

By the middle of the 19th century, the recipe consisted of bourbon, the juice from half of a small lemon, and a teaspoon of powdered white sugar dissolved in seltzer water. More innovations followed, with contemporary bartenders swapping in simple syrup for the powdered sugar and sometimes adding an egg white for texture.

The Gentleman Jack Whiskey Sour Classic invites bartenders to build on this history by sharing their own twist on the Sour. They remain true to the classic formula—whiskey, citrus, and sweetener—but experiment with new ingredients and techniques to showcase their creativity, in addition to the versatility of the Whiskey Sour.

Celebrate National Whiskey Sour Day on August 25 by checking out the seven recipes from last year’s finalists. Try making one for yourself and you’ll see why the Whiskey Sour deserves its own holiday.

Gentleman and a Scholar

Ian McLaughlin set out to create a cocktail with a conscience. He did this by using items that most bars would discard—unused lime wheels and overflowing beer—to create house-made ingredients like strawberry beer syrup and aqua fava (a playful reimagining of aquafaba). It’s only natural to use Gentleman Jack as the base since the Jack Daniel’s distillery recycles and reuses 99% of its materials. This eco-friendly Whiskey Sour isn’t all admirable intentions. It’s also so delicious it helped McLaughlin win the 2019 Gentleman Jack Whiskey Sour Classic.

Tennessee whiskey meets amaro from the Italian Alps in Stephen Woods’ Alpenglow Aspro. In case that pairing wasn’t enough to give this Sour a unique flavor profile, Wood threw in his own concord grape and jasmine syrup for the sweet element. One sip is enough to realize that these ingredients from around the world work in perfect harmony.

No egg whites are required in Thomas Upshaw’s take on the Whiskey Sour. The Oklahoma City bartender opts for mesquite-smoked orgeat to give the Rock Da Boat the silky texture you expect from a Sour. Banana liqueur and pineapple juice add the perfect amount of sweetness to balance that rich smokiness. The tropical recipe is sure to elevate any National Whiskey Sour Day celebration.

Greek yogurt in a Whiskey Sour? It’s not as crazy as it might seem. Nick Hipwell uses yogurt to give his Mediterranean-inspired sour its creamy texture. The pistachio syrup is another unexpected choice that pays off in a big way. Fix yourself the Santorini Sour on National Whiskey Sour Day and soon you’ll feel like you’re kicking back on a Greek beach.

Kyle Law wanted to incorporate cocktail trends from throughout history into his take on the Whiskey Sour. The Savannah bartender uses Jerry Thomas’ 1862 recipe from “How to Mix Drinks” as the template for the St. Catherine’s Sound. In order to incorporate the 1920s practice of adding egg whites to cocktails—and Sours in particular—he created his own milk-washed and acid-adjusted Sour mix. This citrus element is also a nod to the movement in the 1990s of using freshly squeezed juice. Paired with the exceptionally smooth profile of Gentleman Jack, it all adds up to a refreshing and flavorful lesson in cocktail history.

Want to add some unexpected flavor to your National Whiskey Sour Day celebration? Erica Long’s Sunday Morning Sour is made with Earl Grey-infused Gentleman Jack Whiskey, as well as a little coconut milk and clover honey to give the complex cocktail a velvety texture. It’s guaranteed to be unlike any Sour you’ve enjoyed before.

Cesar Perez made inspired substitutions to the key elements of the Whiskey Sour to give the classic cocktail a Southwestern makeover. The Denver bartender chose acid-adjusted pineapple juice for the citrus, a house-made piloncillo syrup for the sweetener, and rounded it out with exceptionally smooth Gentleman Jack. Perez also adds a dash of spicy bitters to give the Tepiatl Sour some heat.