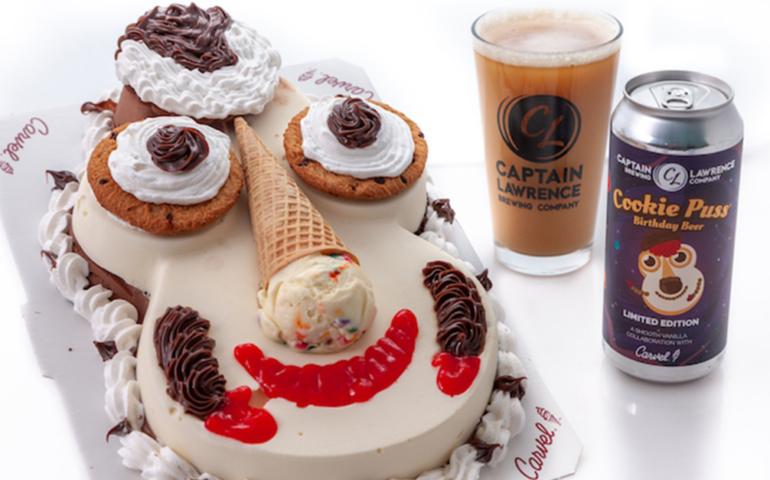 If there’s one thing that makes us crave Carvel ice cream cake, it’s a beer made to emulate it. And so it goes: The latest in a chain of novelty beers are two Carvel cake-inspired beers brewed in partnership with Captain Lawrence Brewery: Cookie Puss Birthday Beer and Cookie O’Puss St. Patrick’s Day Stout.

Cookie Puss, a Carvel ice cream cake character created in the 1970s whose alien visage most closely resembles a clown whose head is a guitar, inspired the two beers. Cookie Puss Birthday Beer is a milkshake IPA, brewed with Carvel vanilla ice cream in honor of Carvel’s 85th birthday in May. Cookie O’Puss St. Patrick’s Day Beer is a pastry stout made with Carvel chocolate crunchies and fudge, LoHud.com reports.

Cookie Puss’ permanent smile may not reveal that the beers ran into some trouble before their debut. According to LoHud.com, label approvals were delayed thanks to the government shutdown, and as a result, Cookie Puss Birthday Beer won’t immediately be released nationwide as originally planned. However, it will be available at retailers across New York State. Cookie O’Puss, meanwhile, will have a larger distribution area because its label was filed earlier.

The limited-edition brews are part of an ongoing partnership between Carvel and Captain Lawrence. Last year, the soft serve chain and craft brewery released Fudgie the Beer, a stout inspired by Carvel’s Fudgie the Whale cake. (We lost our minds, and we never even got to try it. We’re coming for you, Puss.)

For now, the Cookie Puss pair are both available in the Captain Lawrence taproom, and are scheduled to reach retailers by the end of the month.

In the meantime, there’s…this. (NSFW*)
*unless you work at a brewery or your coworkers love Cookie Puss.