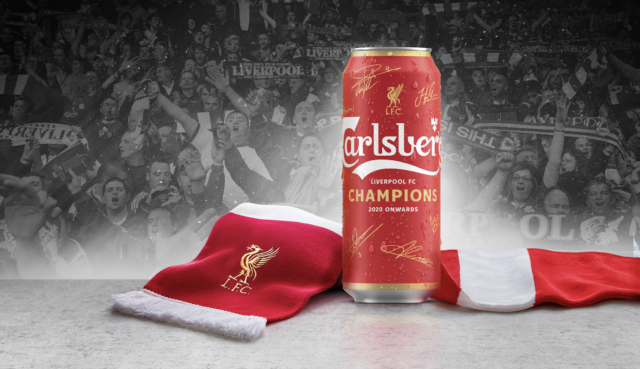 The new release, which also features Liverpool FC’s crest, player signatures, and the words ‘Champions, 2020 onwards’, will be available in 23 countries across the world; with UK fans able to get their hands on the can and a glass chalice through an online giveaway in the coming weeks, the brewer said.

It’s not the first time Carlsberg has had a makeover to honor its relationship with Liverpool. The brewer released a bright red pilsner brewed specifically for Liverpool FC fans in April 2019.

Carlsberg renewed its sponsorship deal with Liverpool F.C. last May, which the Danish beer giant has benefitted from since 1992. Theirs is the longest-running partnership between a brewer and a Premier League club.

Head of global sponsorships, Louise Bach, said: “We’re delighted to be celebrating the team’s incredible season together with Liverpool FC fans across the world. Our role is to make football even better for the fans, and hopefully, this will make their celebrations even sweeter.”