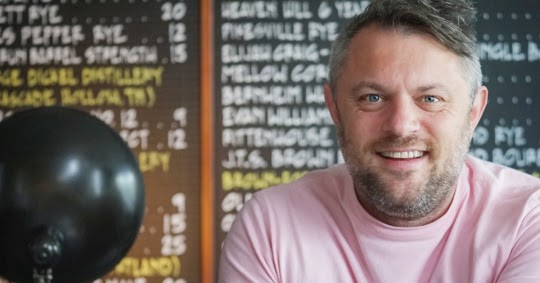 Continuing the Gastronomista Campari America Spirited Connections Interview series, this month is a conversation about mentorship with one of the best in the business, James Beard Award nominee and Spirited Award recipient, Jeffrey Morgenthaler.  He is someone who has been a personal mentor to me from afar (unbeknownst to him!), and I’m sure he has been for others.  But the luckiest ones are those who learn from him while “in the trenches”, the up-and-coming bartenders lucky enough to be mentored by him every day.  Envy is an understatement.

Many, many moons ago, I started this website and stumbled into the cocktail world.  In a rather unexpected career twist, I found myself with an insatiable curiosity to learn more about the cocktail industry: the people, the products, and how to do it myself.  I took some pretty bad photographs, I made some really disgusting drinks, but I started meeting some amazing people.  I also started scouring the internet for more information, desperate for more guidance about exactly what this world was all about.

Somewhere in the early years, I discovered Jeffrey Morgenthaler’s website.  I learned how to make ginger beer, I made my own oleo saccharum for various punches, I made countless Amaretto Sours to his specs, and started my own pocket recipe book (mine however, is red).  Later, when Morgenthaler released The Bar Book, I raced through the pages, picking up practical tips that most bartenders learn on the job, but I, an island onto myself, learned through written word.

I have always appreciated Morgenthaler’s no-nonesense mentality towards simplicity, staying true to the cannons of cocktails, and always being in pursuit of doing things better.  He approaches bartending and bar management with a particular rigor that is uncannily familiar to me – after all – he too studied architecture.

Morgenthaler has mentored countless people in the industry, at his own bar and in the community at large.  It’s fair to say that through his books and his website, he feels like a mentor to me as well, a feeling that I’m sure so many bartenders and writers can relate to.  So needless to say, it was a tremendous honor to spend a few hours with him at his bar in Portland (yes, I might have fanned out a little bit).  This was not the first time I met Morgenthaler, and I hope not the last.  He is warm, welcoming, and incredibly funny – a consummate host.  His laugh is loud and dominates the room, as does he.  And as for his Old Fashioned, it is perfect.  Don’t even bother arguing.
`

Gastronomista: Jeff, it is a huge honor to host you in my Spirited Connections Interview series with Campari America.  Your blog has been such a huge source of inspiration for me, and an invaluable resource during my cocktail self-education.  It’s fair to say that you have been a mentor to me (via the internet) for years, and I cannot thank you enough for sharing your wisdom with cocktail enthusiasts like myself.

Speaking of mentorship, I would love to discuss how mentorship has impacted your career, both as someone learning a craft and as someone passing along your knowledge.

Morgenthaler: Aw, thank you. Sharing what I’ve learned has always been the most important thing to me as a bartender, and it always makes me so happy when I hear that my knowledge has helped someone else. It’s nice when someone “gets it”. So many people think that sharing my knowledge is just me trying to “promote my brand”, whatever the hell that means, and it’s like, hey, I’m genuinely just trying to help.

Gastronomista: Why did you start your website, and how has it changed your opinions on giving back to a community and teaching others?

Morgenthaler: I originally started it because I wanted to learn how to install the blog software on my web server. I was just messing around. And then I started sharing recipes from the bar on there, just for our regulars who came in and might want to make the drinks at home. I realized that people all over the world were coming to the site looking for cocktail information, and it just kind of grew from there.

Gastronomista: Why do you think it is so important to pass along your learnings behind the bar?

Morgenthaler: I learned to tend bar in a pretty small town: Eugene, Oregon. We had some great, truly great bartenders there that I would watch from the other side of the bar. But there weren’t a lot of people doing cocktail stuff, not like the sort of stuff we do now. So I had to learn from people who were willing to share their knowledge in books and online. I’ve never forgotten how important that was to me, and I want to do the same for other people who might not have access to formal training or a selection of world class bars they can visit in their own town.

Gastronomista: Do you have any particularly gratifying memories of your mentors, and those who have been lucky enough to study under you?  What has been the greatest takeaway?

Morgenthaler: I was trained at my first bar by a woman named Nancy Bertini. Nancy was a lifer, I think she’d been at The Tiny Tavern for twenty years when I got there. She was matronly, kind, fast, and very firm with the sometimes rough clientele. She worked happy hour, and I was the closer. So we saw each other probably four or five times a week for four years. I learned a lot about being organized and managing a busy room from her.

Later on, I worked for Stephanie Pearl-Kimmel at Marché, and she was one of the early followers of Alice Waters. I learned a lot about culinary technique, consistency, and service in her restaurants. I could still spend hours sitting at the chef’s counter and watching the line cooks work. It’s always been mesmerizing to me.

But the greatest feathers in my cap are when people that I’ve gotten to work with over the years go on to run their own programs, and mentor people on their own. I can’t take credit for anyone’s success because I always hire people who are going to be great with or without my help. But it’s just so awesome to see people you’ve worked so closely alongside go on to do great things. And most of them have.

Justin Pike manages the bar at Tasting Kitchen in Venice, California. It’s one of the most consistently acclaimed bar programs in Los Angeles. Andrew Volk owns the Portland Hunt + Alpine Club in Portland, Maine. Food and Wine named him as one of the best bartenders in America, and they’ve been nominated for Outstanding Bar Program by the James Beard Foundation.

Gastronomista: In my opinion, The Bar Book is one of the most important reads for people learning about the cocktail industry – it covers essential techniques, tools, and tricks of the trade.   What makes your second book, Drinking Distilled, (congratulations!) – different, and how do you hope that it will be received by cocktail enthusiasts?

Morgenthaler:  Thanks! I’m hoping to reach more than just cocktail enthusiasts with this one. It’s geared toward people who simply enjoy a cocktail, people who enjoy a bar, or enjoy hosting a party at home. Cocktails are such a small part of what makes up the bar and entertaining world, and I have lots more to say about those other things.

Morgenthaler:  Our Cynar Collins at Pepe Le Moko is probably my current favorite. Here’s the recipe!

Combine Cynar, lemon, and simple syrup with ice in a cocktail shaker and shake until chilled. Add soda directly to shaker and strain over fresh ice in a Collins glass. Garnish with a lemon wedge.

-sponsored-
This is a sponsored post written by me on behalf of Campari America. All opinions are 100% mine.
Thank you for supporting the brands that make this blog possible.
Share this on WhatsApp