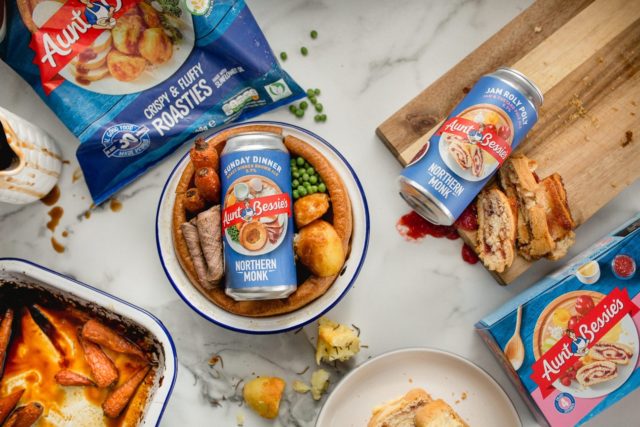 Sunday Roast, a 5.7% ABV brown ale, was brewed with Aunt Bessie’s Yorkshire puddings and roast potatoes, which were added to the mash tun.

The 5% ABV Jam Roly Poly, meanwhile, is a ‘jam and custard pale ale’ made using the ingredients in Aunt Bessie’s frozen puddings, including plum, apricot and strawberry.

Commenting on the collaboration, founder of Northern Monk, Russell Bisset, said: “It’s been an honour working with Aunt Bessie’s, a truly iconic Northern brand. There’s nothing quite like a Sunday Roast with all the trimmings.

“We’ve worked together to create something that’s never been done before, and we hope that it brings some well-needed positivity to the nation.”

Sam Dolan, head of marketing at Aunt Bessie’s, added: ‘There’s nothing like coming together with loved ones over a roast dinner and a cold beer, and so to join forces with a fellow Northern brand to create something which has never been done before is really special.

“We’re sure Aunt Bessie’s fans are going to love the combination of a two-course roast dinner beer and as we celebrate Aunt Bessie’s 25th birthday this year, what better way to mark the occasion?”

Cereal giant Kellogg’s has also ventured into brewing, partnering with Salford-based brewery Seven Bro7hers in 2018 to create a beer made with cornflakes that were either too big, too small or overcooked to make it through quality control.