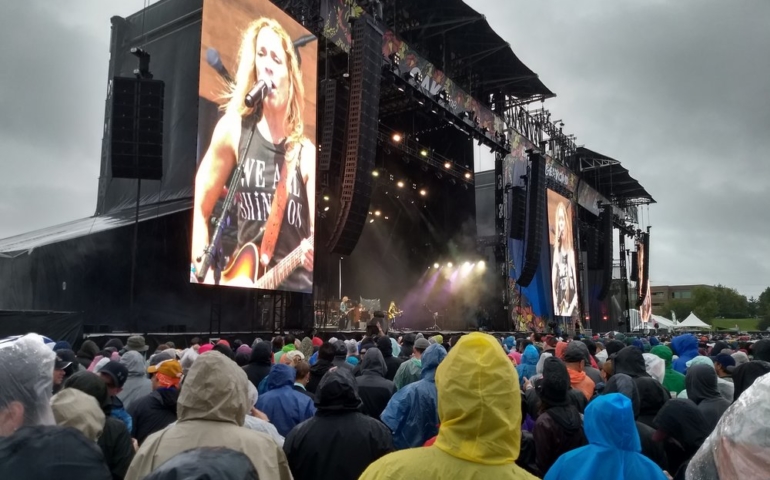 Weather conditions forced a canceled day of programming, but the event wasn’t by any means a total washout.

All photos by Maggie Kimberl.

If anyone said to me they could pull off a music festival with “bourbon” in the title – and give both the music and the bourbon equal billing – I would have been skeptical. There are a lot of events that say there’s “bourbon” involved that seemingly have nothing whatsoever to do with America’s Native Spirit. Fortunately Bourbon & Beyond is not one of those events – rather it meshes everything that is great about Louisville (and about Kentucky) into one awesome weekend of fun. At least when the weather cooperates.

2018 was the second year for the Bourbon & Beyond festival. There were three stages for music. The Barrel Stage and the Oak Stage were where the headliners played throughout the day, alternating sides. There was also a Bluegrass Situation stage located in the Big Bourbon Bar. Despite the three venues for musical artists – which included such names as Sheryl Crow, Lenny Kravitz, David Byrne, John Mayer, Keb Mo, and more – the music was not the only attraction that drew in the crowds.

Louisville has been well-known for its music scene for years, so much so that Copper & Kings founder Joe Herron says this fact influenced his decision to locate his distillery in Louisville. We’ve also been known for our cuisine for as long as anyone can remember, boasting a higher concentration of restaurants per capita than most large cities. And, of course, after decades of struggle, Louisville has reclaimed its rightful place as the center of the bourbon universe. Combining these three elements is so genius it’s a wonder no one has done this before on such a grand scale.

On the Mash Stage there were new guests and topics every hour. Chefs Aarón Sánchez and Edward Lee took the stage for a cooking demonstration in a GE sponsored on-site kitchen where the audience learned cooking tips like soaking your beans in something other than water to give them greater flavor, throwing out old spices at least every six months, and brining meat to room temperature before cooking. Peggy Noe Stevens, founder of Bourbon Women, hosted multiple panels including one in which Jim Beam’s Beth Burrows and Japp’s Since 1879 Cocktail House founder Molly Wellmann each made classic bourbon cocktails with Booker’s Bourbon. Burrows inventively turned a Booker’s box into a portable smoker to make her smoked Old Fashioned, while Wellmann made an esoteric classic called Remember The Maine.

There were also workshops on the Bourbon+ Workshop stage, ranging from A Family Affair with Wild Turkey’s Jimmy, Eddie, and Bruce Russell to Value Bourbon featuring Heaven Hill’s Denny Potter, Jim Beam’s Beth Burrows, and Barton 1792’s Josh Hollifield. Multiple brands had stations throughout the festival grounds where visitors could stop by, purchase a drink, learn about the brand, and often pick up some branded swag. Bulleit brought out its famed Woody trailer, Blade & Bow presented from a gorgeous converted horse trailer, and Uncle Nearest held court educating consumers. The Silver Dollar hosted The Hunter’s Club, one of the few totally indoor venues at the festival site which featured the bar’s full lineup of signature cocktails as well as rare bourbons.

In addition to the seminars, brand booths, bars, and more, there were also demonstrations of things that people often take for granted in the whiskey world. Vendome Copper & Brass Works was demonstrating the techniques it uses to build the copper stills that make your favorite distilled spirits. There was a section of a column still, a pot still, and Mary Dowling’s doubler from her Prohibition-era bourbon distillery in Juarez, Mexico. Brown-Forman was there charring barrels, which is something few people outside the industry ever really get to see in person.

It rained pretty steadily throughout the day Saturday, so much so that the Sunday events had to be cancelled due to flooding (also a Louisville thing). But the fact so many people threw on boots and ponchos and braved the rain on Saturday really speaks to the quality of this event. It’s a difficult thing to pull off an outdoor event of this magnitude. My boot got stuck in the mud on the way to the car and I ripped the sole off trying to pull it out of the mud. Some people were calling it “Bourbon Woodstock.”

Though rain and flooding led to the cancellation of the Sunday events (see information here about a refund), festival-goers didn’t let the weather deter them from celebrating American whiskey in style. I was super bummed to miss Counting Crows, Blackberry Smoke, Robert Plant and Sting, and I’m down a pair of old favorite boots, but that won’t deter me from being there again next year. Bourbon took center stage at the 2018 Bourbon & Beyond Festival – it wasn’t just a sidekick for Sheryl Crow and John Mayer.