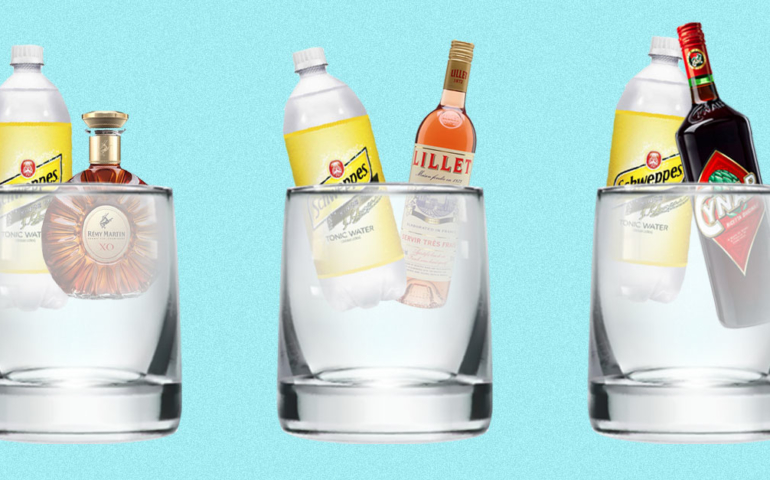 If you’re drinking tonic water, chances are it’s part of a G&T. If not, it’s almost certainly being mixed with vodka and garnished with some form of citrus fruit. Rarely do we consider tonic as a mixer in other cocktails, likely because of its complex, bitter flavors.

It wasn’t always this way. Tonic water was actually conceived as a means of making quinine powder — a known malaria preventative — more palatable to British soldiers stationed in India in the 19th century. The soldiers soon realized adding gin to the mix improved things significantly. “The gin and tonic has saved more Englishmen’s lives, and minds, than all the doctors in the Empire,” Winston Churchill said years later.

Today, you’d be hard pressed to find many drinkers who associate tonic with health. It is, however, a versatile mixer. When sipped straight, the bitter complexity of tonic water can be divisive; but those same flavors make tonic a wonderful match for a range of spirits.

Take it from us — VinePair recently tasted the bitter, bubbly mixer with just about every spirit in our inventory. Here are our six favorite tonic-tinged cocktails that don’t contain gin or vodka.

Combine two parts tonic, one part Cognac (preferably V.S.), and a good squeeze of lemon for a refreshing drink that hints at a Japanese Highball. Green apple and citrus fruits are the dominant aromas, while the tonic’s bitterness brings out cedar notes on the palate. Add extra tonic if you want to dial down the complexity.

Do you enjoy the bitterness of a Negroni, but find Campari cloying? If so, you’ll love this fruity, earthy mix. It has herbal and sweet vanilla aromas, and a delicate smoky flavor. Garnish with fresh strawberries, an orange wedge, and sprigs of mint for a sophisticated, Pimms Cup-inspired punch.

An aromatic French aperitif made from fortified Bordeaux wine, Lillet’s original formula was actually designed around quinine, making it the ideal pairing for tonic water. (The brand dropped quinine from the recipe in 1985.)

Mix equal parts Lillet Blanc and tonic for an aromatic, floral summer sipper. Add a few drops of lemon juice to bring it to life, and garnish with a slice of blood orange. If you want to be extra, sweeten with a lavender simple syrup and garnish with a split vanilla pod.

Lillet Rosé offers all of the same summer notes, with added red berries, including cherry, strawberry, and raspberry. Substitute fresh lime in place of lemon, and serve with a generous sprig of mint.

Be it white, lightly aged, or dark, pairing rum with tonic is a delightful combo that promises to convert skeptics.

The bitterness of tonic balances out the sweet notes in white rum. Combined with lightly aged rum, the spirit’s vanilla aromas start to shine, complemented by white flowers and coconut. (Basically, if Malibu were classy, this is what it would taste like.) Dark rum and tonic tastes like cloves, cedar, pine, charred wood, and tobacco.

In each of these drinks you can play around with the ratios (they’re all delicious, to be honest). A simple squeeze of lime is all you need to serve.

How you approach tequila and tonic depends on which variation of the agave-based spirit you have in hand.

For a citrus-forward Highball, mix three parts tonic to one part blanco tequila, and garnish with a lemon wedge and cucumber. When pairing with reposados, use two parts for every one part of tequila. The pleasantly sweet mixture showcases the vanilla notes the spirit gains during oak aging. Garnish with a cinnamon stick or freshly grated bitter dark chocolate.

We don’t recommend pairing añejo tequila with tonic. It works, but it’s nowhere near as tasty as blanco or reposado.

Ubiquitous in Portugal, the porto tonico is a fruity, refreshing aperitif that we can’t get enough of. Combine two parts tonic with one part white port for a fresh, zippy mix that highlights the oxidative notes of the fortified sweet wine. Best of all: White port is just 20 percent ABV, so you can crush a few of these without worrying about overdoing it.

The article Beyond G&T: The Best Cocktails to Make With Tonic Water appeared first on VinePair.