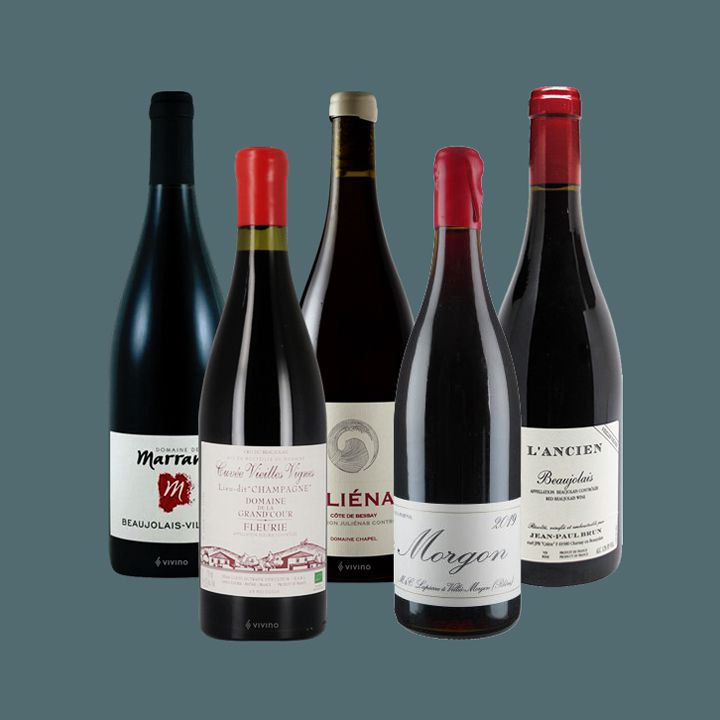 Wines from Beaujolais are having a moment, and it comes as no surprise. These juicy easy-drinking reds are perfect for sipping year-round with a variety of foods, and their relatively low price point makes the deal all the sweeter. These bright, versatile, and light-on-their-feet wines are perfect for pleasing a wide range of palates.

(Note: Beaujolais Nouveau is an entirely different style of wine produced within the region. The wine is vinified the same; however, the élevage (aging) period is just a few weeks to months after harvest, meaning that the wine is released to the market during the same season/year that the grapes were picked. These wines are often rather thin and light-bodied and can be slightly sweet. Beaujolais Nouveau wines are generally not the best expressions of regional quality, though they represent a long-standing tradition of celebration and tradition. Beaujolais Nouveau Day, the day when these young wines are officially released, is always the third Thursday of November and is marked in France with music, festivals and fireworks.)

Beaujolais is a wine-producing region and AOC in eastern France. The appellation is best known for its eponymous red wine production based on the Gamay grape, though a very small amount (about 1%) of the region’s wines are white, made from chardonnay and/or aligoté grapes. Beaujolais wines are produced in their namesake region in eastern France, which is located north of Lyon and south of the Maconnais. Although Beaujolais was (and sometimes still is) lumped in with Burgundy, the region is now usually considered to be its own entity.

Wines from Beaujolais are produced from 96 villages within the region, though most are designated under 12 main appellations. The Beaujolais and Beaujolais-Villages AOCs are the most widely used appellations, followed by the region’s 10 crus: Brouilly, Chénas, Chiroubles, Côte de Brouilly, Fleurie, Juliénas, Morgon, Moulin-à-Vent, Régnié and Saint-Amour.

The production process for Beaujolais wines is pretty similar to that of any other red wine. However, there’s one key technique that sets these wines apart from most other reds: carbonic maceration.

Carbonic maceration is an intracellular means of fermentation that allows fermentation to begin within the berries themselves, as opposed to being crushed first. This happens by placing whole berries in pressurized tanks and allowing carbon dioxide to penetrate through the skins of the fruit. Once the grapes reach an alcohol level of a few degrees, the grapes are then crushed, and fermentation is continued as per usual.

Most Beaujolais wines are light- to medium-bodied and extremely fruit-forward, which are direct results of carbonic and semi-carbonic maceration. Wines that are vinified without the use of carbonic will be on the fuller side, though Gamay-based wines are hardly ever full-bodied. Beaujolais wines are also known for their high acid and low levels of tannins, which make them able to pair with a wide variety of foods. Common flavors found in Beaujolais wines are tart red fruit, cherries, white pepper, potting soil, citrus rind, and red currants.

The vibrant acidity, approachable tannins, and easy-drinking nature of Beaujolais make these wines extremely versatile on the table. Whether cheese and charcuterie boards, poached eggs, mushroom-based sauces, or French bistro-inspired dishes are on the menu, popping a bottle of Beaujolais is always a good idea, and you’ll want to serve it slightly chilled.

This high-toned juice from Juliénas bursts with flavors of tart cherries, strawberry skin, violets, and sweet baking spices. Domaine Chapel is the brainchild of David Chapel and Michele Smith-Chapel, a French American couple who founded their eponymous estate in 2016. Serve this one chilled with comfort food dishes—it pairs with nearly anything.

The Dutraive estate is one of the longest-standing and most influential domaines in all of Beaujolais. This old-vine cuvée from Fleurie oozes with silky earth-driven flavors of red currants, wild berries, potting soil, rose petals, and pepper. Serve chilled with hearty stews, roasted poultry, or simple cheese-and-charcuterie boards.

This bright and aromatic Beaujolais-Villages is packed with flavors of crushed raspberries, citrus peel, sweet baking spice, potpourri, and damp earth. Smoky undertones and fine-grained tannins lead to a lasting pleasantly grippy finish. At less than $20 bucks a pop, this bottle seriously over-delivers for the price.

This fleshy Beaujolais comes from Jean-Paul Brun’s oldest vines (40 to 60 years in age) and is rooted in unique dorée (golden) limestone soils. The wine is medium-bodied, juicy, and loaded with flavors of ripe red cherries, raspberry compote, and potting soil. For a more muscular expression of Beaujolais, this is your bottle.

The Lapierre family has long been a pioneer of Beaujolais’ natural wine movement. Today, Marcel’s vision is carried on by his children, Camille and Matthieu, who continue to vinify wines with a low-intervention mentality. This powerhouse Morgon is loaded with flavors of dark berries, violets, wet earth, and blood orange rind. Bright acid and solid structure lead to a lasting mouth-coating finish. Drink now, lay it down in the cellar or buy a case and do both.