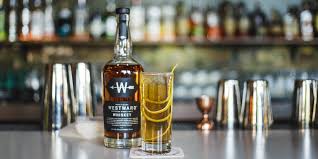 Christian Krogstad’s success with Aviation Gin wasn’t intentional. “It was a means to an end. I just wanted some income while I was aging my whisky,” he explains. Many distillers start off with gin as a way to save money when it comes to storing and aging the spirit. Admittedly, few of those distillers can replicate the success that Aviation Gin created. Even with that, however, Krogstad remained focused on whiskey. It’s taken 13 years, but Westward Whisky is finally available, and based on what happened with Aviation Gin, Westward Whisky is destined for greatness.

Westward Whisky is brewed in Portland, Oregon, where it takes on the climate as well as the natural ingredients to celebrate the American Northwest. Founded in 2004, Westward Whisky draws on the brewing culture of the American Northwest to create their whiskey. Their approach is simple—they make their spirits from scratch using only the best natural ingredients. As a young distillery, Westward has had some challenges when it comes to releases. “Since we were self-funded, we didn’t have a lot of money to make a lot at once,” says Krogstad. “We would fill a barrel here and there, but never had enough to make a blend—which was our intent.” That’s all changed now that Westward has had the time to age some of its whisky. Now they’re blending, and the result is a better flavor profile. Because each cask imbues different qualities into the whiskey, blending can bring about a flavor that is fuller as well as more unique. “A single barrel can be fun and interesting,” explains Krogstad, “but to get a balanced and complex product from that is rare. The best way is to combine them.”

Krogstad also prefers younger whiskeys, which is why Westward uses whiskeys that have aged roughly five years. Krogstad points out that spirits peak at different times, so some are meant to age longer, while others should be enjoyed younger. While blending is finally an option and the distillery’s focus, Westward will still be releasing single barrel whiskeys as well. Whatever your preferences—single barrel or blended, young or old—Westward Whisky has it.