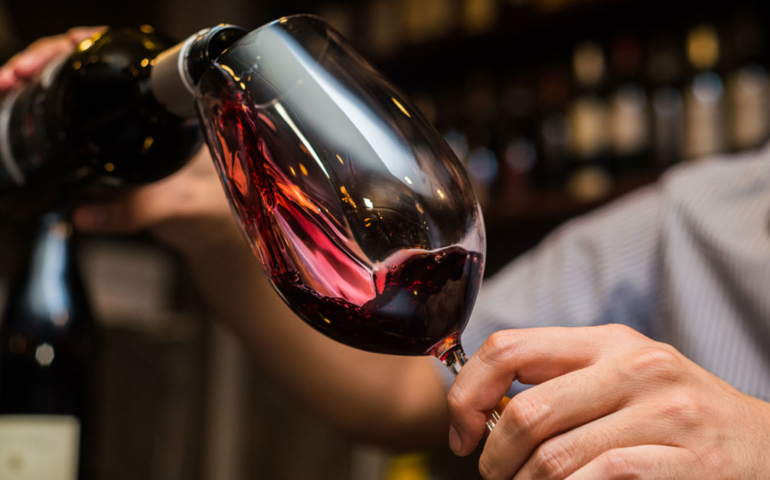 Got a question for Adam? Send an email to advice@vinepair.com

Which red wines are worse than others when it comes to staining my teeth?

If you drink enough red wine, at some point all of it is going to cause teeth stain, but there are red wines that are worse for your teeth than others when it comes to dying your pearly whites a deep purple. Every red wine gets its red color from the pigment in the grape’s skin, but the impact that color has on your teeth gets more intense as you go from lighter-pigmented grapes, like Pinot Noir and Gamay, to darker grapes like Merlot, Cabernet, Malbec, and Syrah. But what really makes a wine stain your teeth isn’t just the darker pigment, it’s also the tannins. Tannins are astringent compounds that don’t just cause your mouth to feel dry; they also help that dark-pigmented wine bind to the proteins on your pretty white teeth. This combination would make Syrah the most likely culprit to give you a purple grill.

If you want to help combat the staining somewhat, eat cheese. The proteins in cheese will create a protective layer of coating over your teeth that the purple pigment will bind to, instead of your pearly whites. And as long as you brush your teeth after a night of drinking, the stain won’t cause any permanent damage. Just be sure not to brush your teeth less than an hour after drinking because the acid in the wine can temporarily weaken your enamel, and brushing too soon means brushing away an important layer of defense that helps prevent your teeth from being permanently stained a lovely purple.

Is it true that people who drink beer get bitten by mosquitos more?

No, turns out all alcohol consumption will make you more susceptible to getting bitten. The idea that beer is more likely to get you bitten is all based on one Japanese study that used beer as the alcohol delivery system for all of its test subjects. And when it was reported by the press, many seized on the fact that beer was used, ignoring that the study was really examining all alcohol consumption, and all of a sudden drinking beer equaled more mosquito bites.

In the study, Japanese researchers had some people drink a beer, and their control group drink water. What they uncovered was that ethanol ingestion upped sweat production and raised skin temperature, making subjects more attractable to mosquitos. As quoted in their study: “Our study demonstrated that percent mosquito landing on volunteers significantly increased after beer ingestion compared with before ingestion, showing clearly that drinking alcohol stimulates mosquito attraction.” Notice how the quote doesn’t say the study showed that drinking beer stimulates mosquito attraction. It says drinking alcohol does, so make sure you have good bug spray or cover up if you plan to be imbibing in the sunshine and don’t want to get covered in bug bites.

The article Ask Adam: Which Red Wine Is the Most Likely to Stain My Teeth? appeared first on VinePair.