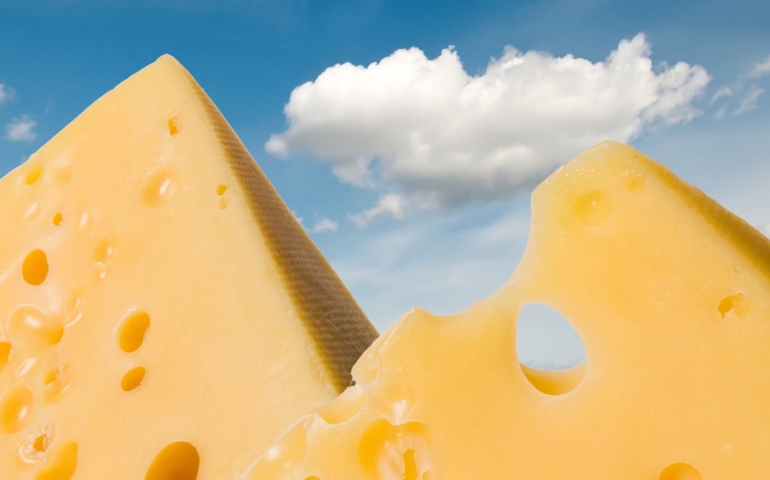 America’s national cheese stockpile (yes, that actually exists, and not just in our dreams) hit an all-time high last year, with the surplus reaching 1.39 billion pounds in June 2018. The stockpile is equivalent to around 900,000 cubic yards of cheese, Vox reports, or roughly the amount required to build a roquefort the size of the United States Capitol.

The 6-percent increase came in spite of the fact Americans consumed an average of 37 pounds per capita in 2017, NPR reports. Thriving milk production, and a decline in cheese and dairy consumption, are the main reasons for the glut.

According to USDA data, milk production increased by 13 percent over the past decade, but Americans drank just 149 pounds of milk per capita in 2017, down from 247 pounds in 1975.

Dairy suppliers process surplus milk into cheese because it stays fresher, longer. Americans’ appetite for processed cheese is turning, however, in favor of more refined styles.

“What has changed — and changed fairly noticeably and fairly recently — is people are turning away from processed cheese,” Andrew Novakovic, professor of agricultural economics at Cornell University, told Here & Now. “It’s also the case that we’re seeing increased sales of kind of more exotic, specialty, European-style cheeses. Some of those are made in the U.S. A lot of them aren’t.”

Meanwhile, the effect of trade disputes with China and Mexico has been surprisingly mild, the U.S. Dairy Export Council reports, partly because the U.S. exports just 6 percent of its cheese.

Simple economics dictates that for the stockpile to decrease, prices will need to drop to lure consumers back in. While that’s gouda news for cheers lovers, it will no doubt have dairy farmers feeling bleu.