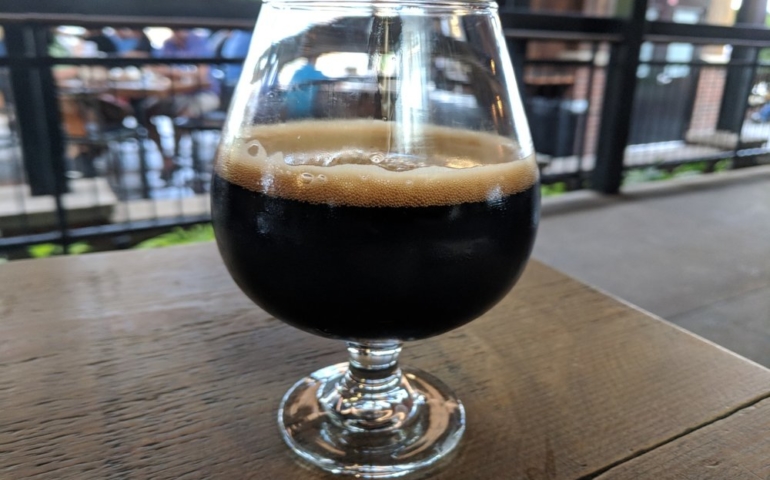 A convivial visit gets to the heart and soul of brewing good beer.

All photos by Kevin Gibson.

I’ve long been a fan of Founders Brewing Co. beers, from Kentucky Bourbon Stout to the more recently-concocted Solid Gold, but until recently I’d not made it to the Grand Rapids brewery itself, relegated instead to taking what I could get on the distribution market.

When I finally found my way there, luckily in the company of Founders employees and brewmaster Jeremy Kosmicki, I found myself in sort of a grown-up’s playground, The enormous taproom, set in a former truck depot, seats roughly 750 people, making it a vast expanse compared to so many of the smaller breweries I’ve visited over the years.

An outdoor beer garden is designed to feel as much like a German beer hall as it can in Western Michigan, and it comes close, with a covered patio and outdoor bar, plus long table seating along one side. After a brief tour of the brewing facility – Harvest Ale (which just released this week) was in the fermenters – with Kosmicki, we settled and began to pore over the beer menu.

If you find yourself at Founders, by all means pay close attention to the taproom-only menu, which on the day I was there, offered up more than a dozen beers you won’t get anywhere else, courtesy primarily of Research and Development Brewer Diamond Deschaine.

I first took it easy and ordered a Kryponita Session IPA, brewed with oats, along with Cascade, Simcoe and Chinook hops for a fruity, but clean, beer with a dry, mildly bitter finish. It was a good place to start as I looked over the rest of the options.

I switched gears to Honey Badger Braggot, sort of a beer and mead hybrid made with blueberries and Michigan honey, coming in fruity, tart, only moderately sweet and deceptively light-bodied at 8.2 percent alcohol. This one would sneak up on you fast.

Other selections on draft during my visit included a classic Kolsch, a brandy barrel-aged imperial red called Brankdankulous, a porter aged in a port wine barrel and the featured tap, Curmudgeon’s Better Half, Founders’ old ale with maple, aged in bourbon barrels.

But no visit to the Founders Taproom would be complete without getting some of that Kentucky Bourbon Stout, aka KSB, at its source. So I did, shortly after Founders co-owner Dave Engbers joined our party and began talking beer. Sitting in the Founders beer garden, sipping KSB and talking with Dave Engbers was quite a treat, I must admit.

He was as welcoming and friendly as the taproom he helped create, which was huge but wholly unpretentious, with a “Company Store” on one end flanked by a pool table, a display showing off some relics of the brewery’s two-plus decades in business, and a gorgeous stained glass composition to go with an art installation. Hardwood floors and exposed ceilings plus a long bar with a slight curve, mirrored bar back and seemingly endless glasses waiting to be filled with delicious liquid round it all out.

As we chatted, and I took it all in, the conversation turned to just why so many people have come to embrace craft beer over the past few years. When beer people talk about this topic, it usually comes back to one key thing, and that’s the way beer tends to unite. Certainly, the 400 or so people buzzing around us would tend to agree. I decided to write down Engbers’ take on the subject as a parting memory of my visit.

“It brings people together,” Engbers told us, “regardless of race, religion or social status. Beer is accessible to everybody.”

Founder’s Harvest Ale is now available through the month of October. For further reading on this year’s hop harvest, please click here.