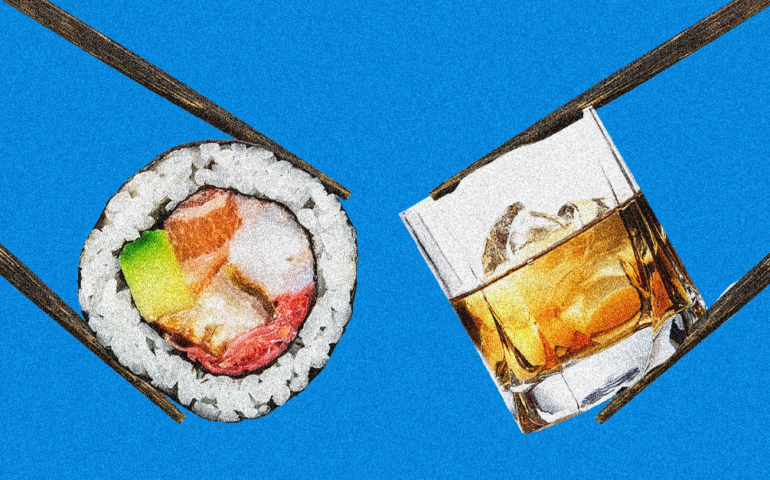 In the 1930s and ‘40s, Four Roses was poised to take its place alongside Hershey’s and Ford in a pantheon of American brands. Established in 1888, Four Roses was one of few distilleries licensed to sell legal medical whiskey during Prohibition, earning it a loyal fan base. The brand burst out of the gate at the end of the Great Experiment, and quickly became one of the top-selling alcohol brands in the nation.

By the end of World War II, however, Four Roses had changed hands and its once-esteemed bourbon had been transformed into a watery blend. The brand was fading into obscurity by the 1980s. According to VinePair contributor Aaron Goldfarb, author of “Hacking Whiskey,” “For the bulk of the 20th century, Four Roses was not a good whiskey in America.”

That could have been the end of the Four Roses story — another old-time whiskey brand, beloved and lost — until a miraculous 21st-century recovery driven by an overseas obsession, an international partnership, and a leap of faith. Today, Four Roses is appreciated for its recipe variety and diverse flavors, Goldfarb says, and has earned its place among famed heritage brands on the shelves of whiskey collectors. And it’s all thanks to Japan.

Four Roses had always produced Kentucky straight bourbon, first under the Paul Jones Company and then during the brand’s tenure under the Frankfort Distilling Company in the 1920s and ‘30s.

But when Canada’s Seagram Company bought the label in 1943, it had no intention of continuing the booming pre-war sales of straight bourbon.

“During World War II you couldn’t make any whiskey. You had to make alcohol for the war industry,” says Al Young, senior brand ambassador at Four Roses and a 50-year veteran of the company. “When Seagram’s purchased the Frankfort Distillery, they got 20 million gallons of bourbon aging in the warehouses. They thought that would be enough to ride the war out in their blended products. People were really getting into the blended area because of the wartime economy and trying to stretch things out.”

Young joined Seagram’s in 1967 as an intern in Louisville, Ky. At the time, the company was reimagining Four Roses as a blended whiskey. It cut the whiskey with neutral grain spirit, blending in sherry and caramel. The brand remained popular because it was simple and sweet, but the whiskey just wasn’t the same.

Seagram’s prepared to stretch its stock for years, maybe decades to come, as long as the war lasted — until all of a sudden it was over.

“They thought the war was going to go on forever. It ended abruptly in 1945, and they had all this whiskey left over,” Young says. “They had so much of it they thought, ‘why don’t we try it overseas as an export product?’”

They sent the original Four Roses bourbon to Europe and Japan, where it was an immediate success. During the U.S. occupation of Japan from 1945 to 1951, G.I.s planted the seeds of Americana in Japanese culture. After the occupation ended, American movies, music, sports, and fashion flooded the Japanese market. Coupled with Japan’s own whisky tradition, the influx created the perfect context for Four Roses to succeed.

In 1971, Seagram’s partnered with the Kirin Company in Japan and cemented Four Roses’ status as a permanent player in the Japanese market.

Meanwhile, Four Roses’ sales and quality continued to decline in the U.S. Since it had pretty wide national distribution, Seagram’s decided to pull most of Four Roses’ advertising to see if the brand had established enough customer recognition to stay afloat. It hadn’t, and by the 1980s Americans nearly forgot about it.

“You have to look at the track record of Seagram’s in bourbons, which over time wasn’t all that great,” Young says. “They didn’t really understand — and they say so in printed copy — they really didn’t understand the category. They were a Canadian house. They were used to Canadian rye whiskies.” Seagram’s continued to change the formula over the years, swapping aged whiskey for unaged, until, as Young puts it, “by the time the ‘90s rolled around it was just an average blended whiskey.”

Young recalls that everyone at Four Roses was eager to revive the whiskey of old, but Jim Rutledge, who became master distiller in 1995, was especially adamant about returning the brand to its former glory. Seagram’s resisted. The bourbon was performing too well overseas and the company didn’t want to rock the boat — until it was rocked from within the company. As later generations of the Seagram family lost interest in beverages (and made ill-advised forays into the entertainment industry), the company collapsed, eventually selling off its assets to beverage giants like Diageo and Pernod.

During this everything-must-go sale, Rutledge began courting Kirin, hoping to evolve the relationship beyond importing. He planned for the Japanese company to buy Four Roses. “If the brand hadn’t had such success in Japan, I’m not sure [Kirin] would have said yes,” Goldfarb says. Thanks to Four Roses’ popularity, though, Rutledge met like minds across the Pacific. In 2002 they finalized the sale and Kirin officially took control of the distillery.

Four Roses spent nearly 60 years beneath the tyranny of a confused foreign owner, and the latest acquisition could have caused further strife for the brand. But the team at Kirin had watched Four Roses bourbon perform well in Japan for decades, and they understood the value of Kentucky expertise. Rather than attempt to overhaul the distillery, the new owners let Young and Rutledge make bourbon exactly how they wanted: the old-fashioned way.

“Rutledge was one of those guys who was deified by the collectors,” Goldfarb explains. “He became known for taking Four Roses out of the doldrums before this modern era when bourbon was red hot.”

While Rutledge was instrumental in facilitating the purchase, Young points to two people on the Japanese side who also deserve credit for making it happen. Yoshio Enomoto, the first president of Four Roses, handled the transition in 2001, but it was the second president and CEO, Teruyuki Daino, who moved his office from the Kirin headquarters in Tokyo to the distillery in Lawrenceburg, Ky.

“It was his strategy to introduce the brand nationwide in the United States,” Young says. “Under his leadership, Four Roses Single Barrel was introduced in 2004 and Small Batch in 2006. He was the driving force in making the ownership transition work so smoothly.”

With the American whiskey boom in full swing, Four Roses sales exploded in the U.S. Skyrocketing demand led the distillery to expand from 4 million gallons per year to 8 million in 2016, but the owners at Kirin remained faithful to the brand’s original formula.

“[Kirin] invested a great deal of money here to try to keep everything the same,” Young says. “The perimeters [of the tanks] are the same, whether they’re wooden or steel. … It’s all dedicated to preserving things the way it works.”

Goldfarb points out that the success of the revival may be due to this hands-off strategy. He says, “[Kirin] let the good old boys in Kentucky keep doing what they’re doing, and it seems to be working out so far.”

The new Japanese owners have made quite a profit on their investment, of course, Young says, but he gives them credit for their commitment to the brand. “They have expressed a vested interest in making this thing go,” he says. “This doggone thing, as of last year, has gone on for 130 years after Paul Jones first trademarked it in 1888. We think we’re going to be here a while longer.”

The article An Iconic American Bourbon Owes Its Legacy to Foreign Fans appeared first on VinePair.