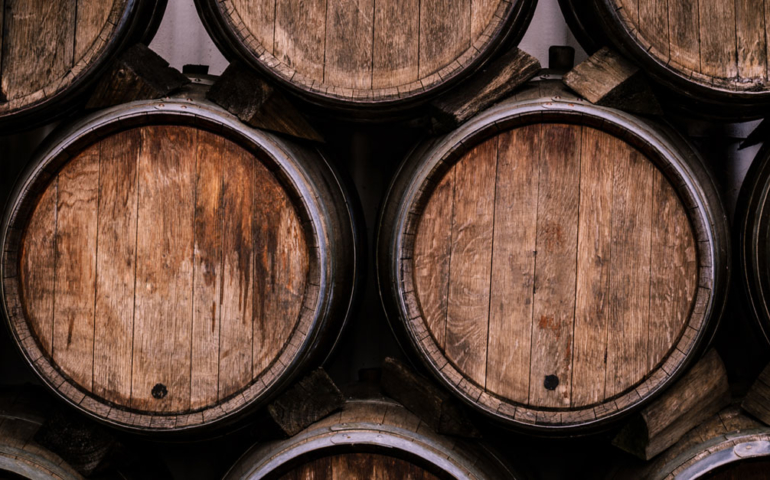 Matt Albrecht, a third-generation woodworker in rural Maine, provides highly specialized services to some of the most esteemed brewers in the country.

“I came from a family of woodworkers and do-it-yourself-ers, so I always had an appreciation for woodworking,” Albrecht says.

His company, River Drive Cooperage and Millworks, sells custom barrels to Allagash, Deschutes, and Bells, as well as industry darlings de Garde, Side Project, and Suarez Family. He can provide them with vessels used for mezcal in Mexico, sherry in Spain, bourbon in Kentucky, or wine in Hungary.

To find Albrecht’s cooperage, you have to drive a series of increasingly rural roads 30 minutes inland from Portland, Me. No matter where you’re coming from, though, River Drive is right on time.

The popularity of barrel-aged beverages is skyrocketing. What began as a few cult brewers resting porters and stouts in old bourbon barrels is now a seemingly endless parade of wine-barrel-aged beers and bourbon-barrel-aged Cabernet Sauvignons.

River Drive rides this wave with equal parts craftsmanship and opportunism. Albrecht is not a country bumpkin aw-shucks-ing his way into beer’s inner circle. He is a skilled technician, employing chemicals and monitoring industry trends to create a flourishing operation — and the occasional “Frankenbarrel” along the way.

The name River Drive is intentionally folksy, recalling how lumberjacks would use waterways to transport cut trees. Credit: facebook.com/RiverDriveLumber

Albrecht created River Drive in his garage in 2008. Its name is intentionally folksy: In the most reductive sense, the term “river drive” denotes how, in the years before interstate highways and log trucks, lumberjacks would cut down trees and would float them down rivers to their destinations.

Albrecht started out salvaging logs and restoring old lumber for furniture and signage. Then, after a trip to Ireland with friends, he started thinking about the ways oak barrels affect beer and spirits. When he returned to Maine, Albrecht began purchasing barrels, using the wood to make tables or furniture. Before long, craft brewers came calling.

“We feel like we know what to expect when we are buying a type of barrel that we haven’t used before, and that means a lot,” Ben Kehs, assistant brewmaster at Oregon’s Deschutes Brewery, writes in an email to VinePair. Kehs also appreciates how River Drive provides unusual barrels, formerly used to house things like maple syrup and mezcal. That is “exciting for us as we pursue new ways to innovate within our recipes and processes,” Kehs adds.

Thanks to Albrecht’s woodworking roots, River Drive has barrel-related connections all over the globe. If a brewery needs an American oak barrel that formerly housed bourbon, or a French oak barrel that once contained any type of wine, or a dozen other variables, Albrecht can help.

But what if someone wants something else? What about those breweries making cinnamon whiskey stouts or vanilla Scotch barrel saisons? What do they use?

The end result effectively mirrors “the characteristics and profiles a stave develops after years of aging a wine or spirit,” Albrecht writes in an email. “Companies often use our products when they need to achieve very specific notes while avoiding the unknown variables that come with barrel aging… Fiber Infusion Technology™ allows for an advective mass transfer of the spirit’s flavor properties into the fibers of the wood while bringing forward (and regulating if desired) precious tannins and compounds within the oak.”

Put more plainly, with F.I.T., Albrecht is able to add notes of vanilla or cinnamon to a wood barrel without the pesky imperfections of the aging process.

If this sounds somewhat artificial to you, that’s because it is. After all, there is no such thing as a cinnamon or vanilla barrel.

“Well, it’s fake,” Albrecht is quick to explain about certain flavors. “It’s not real. It’s inauthentic. We’re not here to pull the shades over anyone.”

Authenticity is a big deal in craft beer. For some, Albrecht’s methods are off-putting, injecting artifice into a wholesome craft brew.

When VinePair contacted brewers about this story, several emphatically stated that F.I.T. was something they do not use. Two companies that do use the technology didn’t respond to multiple calls or requests for comments.

Albrecht, however, believes River Drive’s methods honor history, merging old and new technologies to create something modern and inventive. One could compare it to how sports scouts blend advanced analytics with the good old “eye test.”

As a consumer, should it matter if a barrel came directly from a distillery or winery? Should it matter that there’s a history or a story? If the flavor is good, should we care if it was there naturally or with a little help?

These questions echo larger issues in craft beer. As the industry continues to evolve and expand, consumers demand perfection, consistency, and accessibility. That’s exceedingly difficult on a large scale.

Albrecht stands by his operation. “There’s real spirits in the barrel,” he says. “It was just like artificial insemination. It’s still a real baby.”