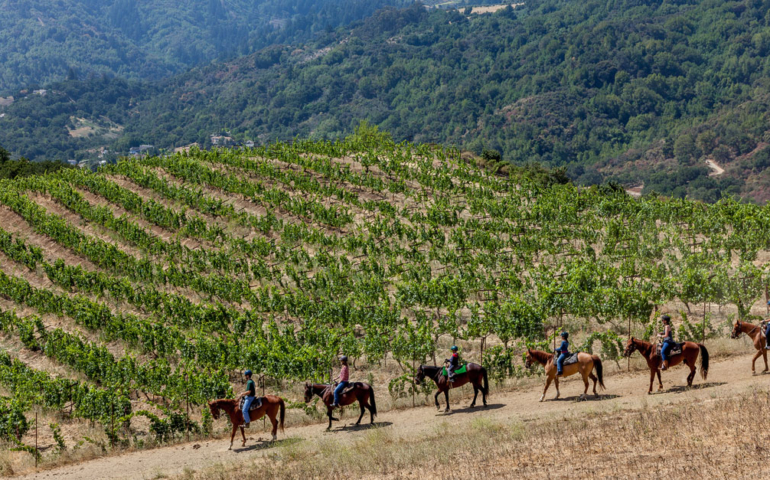 Don’t assume something small is insignificant. The Santa Cruz Mountains American Viticultural Area (AVA) has only 1,600 acres of planted grapes, compared to Napa’s 45,000 acres and Sonoma’s more than 60,000 acres. But the area is producing excellent wines — and slowly working its way into the spotlight.

In December 2018, the Santa Cruz Mountain region was the only U.S. destination included in Condé Nast Traveler’s “Best Wine Regions to Visit in 2019.” A few months earlier, a Pinot Noir from Mount Eden Vineyards, a winery in the AVA, was served at Prince Harry and Meghan Markle’s royal wedding. Consumer demand for that Pinot then became so heated that the winery limited the number of bottles each person could purchase, Food & Wine reported.

“The Santa Cruz Mountain region is truly a David to the Napa/Sonoma Goliath,” says Steve Johnson, proprietor, Lester Estate Wines in Aptos, California. “Yes, we are the underdog, but we offer an old-school, up-close, and personal experience that can only come from small, family run and operated wineries.”

In 1981, the Santa Cruz Mountain Appellation was the first American Viticulture Area to be defined by a mountainous region. The legendary fog line wraps around the entire range from the Pacific West Coast, encompassing its highest vineyards on the ridge tops at 2,700 feet elevation. The area’s diverse microclimates, fog, ocean breezes, and warm temperatures inland contribute to the characteristics of the wines that are also defined by the mountain terrain.

There are more than 60 wineries and over 200 small vineyards in Santa Cruz, producing Pinot Noir, Cabernet Sauvignon, Chardonnay, Syrah, Merlot, and Zinfandel, among others. The region is about 90 minutes outside of San Francisco, and the wineries are situated in such a way that it’s easy to visit two or three in a day without feeling rushed.

Curious about the individuals putting this historic AVA back on the map? VinePair met with some of the region’s winemakers to share their stories.

“We produce some of the finest wines in the New World,” Fogarty says.

He was just 10 years old when the first vines were planted here, on 360 acres of land his father purchased in Woodside, Calif. After a career as a professional Formula race car driver from 1995 to 2006, Fogarty joined the family business in 2007. It’s never boring, he says.

“Weather changes the way we grow wine,” Fogarty says. “The growing season seems to have shifted to bring us bud break and flowering earlier than it used to, and the harvests are consequently earlier. We have adapted… but I often wonder if this trend will continue.”

The changes in the industry and the cost of doing business in an expensive area are happening very quickly for a small producer. “When you’re small, you adapt or perish,” Fogarty says “Selling through distributors to restaurants and shops is less profitable every day. We have been lucky to develop our wine club as well as we have.”

The wines of the Santa Cruz Mountains are, by definition, grown in challenging conditions. Fog, wind, cool temperatures, lean soils and diverse terrain all add to farming expense and make constant vigilance in the vineyard a necessity every vintage, Fogarty says. But those challenges can also yield rewards.

One thing he’s learned over the years is to seek out customers who respect and appreciate what you do and then take excellent care of them. “Never, ever, try to be ‘all things to all people,’” he says. “It will not work.” Location.

NASA test pilot George Cooper thought growing grapes and making wine would be a great retirement hobby. After 20 years of making wine for the family, in the spring of 1994 the Cooper-Garrod label debuted in the marketplace. Today, son Bill and his wife Doris run the business.

“Having someone learn from him to carry on was a necessity if the business was to continue and succeed,” says Bill, who worked in the Foreign Service until 1996. “For an international relations major and former diplomat, there was a lot of chemistry to learn.”

But learn they did and, almost a decade ago, they transitioned the operation to organic. Cooper-Garrod was also one of the first three vineyard/winery operations in California to be certified CSWA-sustainable.

There have been plenty of challenges for the family that has been farming this land for 125 years, first with prunes and apricots. “When my dad started, there were lots of small distributors looking for small producers,” Bill says “When that model changed a few years after I got here, we, like every other winery, had to develop the direct-to-consumer experience.”

Johnson once taught high school history, worked in residential real estate, and the high-tech industry, mostly in the systems software segment. But since 2013, it’s been all about the wine. “We got started by having custom-crush wine made from our vineyard for the owner’s personal use.”

Dan and Pat Lester planted vineyards in 1998 and 2000 and sold grapes to local wineries. “After seeing the success of making excellent, award-winning wine from our vineyards by these other winemakers over the years, we decide to start making wine under our family brand,” Johnson says.

Lester has a different business model than other wineries. The vineyard in Aptos has produced many award-winning wines over the last 10-plus years. So, when the company started making its own wine, it hired four of the best winemakers in the area from San Francisco, Monterey and Santa Cruz. There are eight different clones of Pinot Noir in the vineyard, so Lester winemakers can each create different expressions of wine from the same plot.

“We hope people find something in our collection, it’s like having a Picasso, Renoir, a Monet,” Johnson says.

Johnson says the learning never stops. “You need to attend seminars and classes,” he says. “This is a dynamic business. You sometimes need to experiment and get out of your comfort zone.” Location.

“I grew up in a family where wine was always on the table. It made me curious about the process,” Alfaro says. “The entire process excites me – from being able to grow the grapes from the very beginning, all the way to the end result (a great bottle of wine) and everything in between.”

Alfaro has been in the business for more than 20 years. He started out planting a few grapes for fun and then enjoyed it so much he transitioned it from a hobby to a business. He and wife, Mary Kay, formerly owned a wholesale bakery and a restaurant, Alfaro’s Micro Bakery. Those connections have been beneficial in getting his wines in restaurants. “A lot of the restaurants used to buy my bread,” he says.

The winery is known for its Chardonnay, Pinot Noir, Merlot, Syrah and unique Grüner Veltliner, and it’s wine club is a big part of the business.

Visitors will likely find Alfaro at his vineyard and winery in Corralitos on a Sunday afternoon, chatting up wine club members and even bringing out pizzas. His smile is broad. Is it possible to be happier? “This isn’t work for me,” he says. “I get up every day looking forward to the challenges.”

He has help, too. His 25-year-old son recently completed the postgraduate wine science program at the University of Auckland in New Zealand. He came on board as assistant winemaker, Alfaro says, and “will slowly but surely squeeze me out of the day-to-day operations.”

With so few grapes grown in the Santa Cruz Mountains, much of the wine never makes it out of the area, Alfaro laments. “This makes our wines more difficult to find and to learn about. But the region has been producing world-class wines for quite some time. You just have to take the time to try them.” Location.

The article A Northern California Wine Country Underdog Is Working Its Way Back Into the Spotlight appeared first on VinePair.