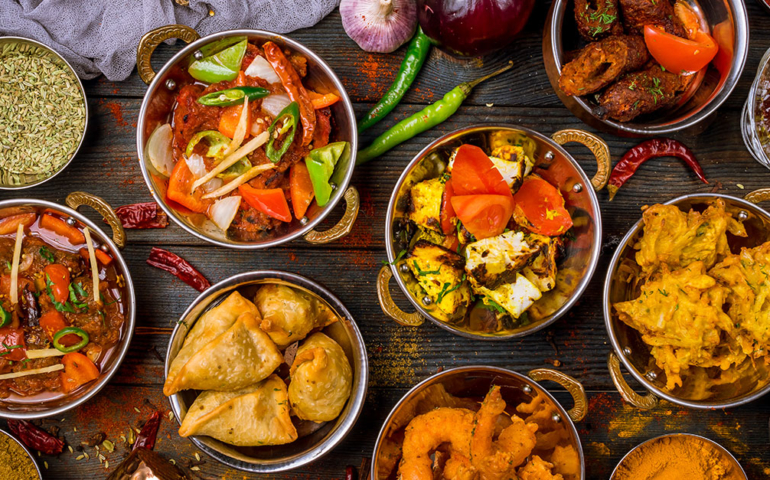 Whether it’s fine dining or Tuesday takeout, when it comes to pairing beverages with Indian cuisines, most of us default to easy-drinking beer. After all, a frosty lager is tasty, refreshing, and, most importantly, foolproof.

A number of wines complement different Indian flavors, though, as award-winning sommelier Rajat Parr told VinePair. Cocktails might seem intimidating, but there are ways to approach those flavors alongside your favorite Indian fare as well.

“To come up with this menu, I did a lot of research into spices and typical Indian dishes,” Vasquez says. “I tested homemade syrups, fruit purees, dehydrated fruits, dry flowers, macerated fruits, and smoked cocktails.” Those simple additions result in perfect pairings, he says.

India Rosa serves an array of delightfully layered cocktails — from an Old Fashioned made with Amrut whiskey and ginger syrup, to a Boulevardier featuring pink grapefruit, chocolate bitters, and grapefruit bitters. There is also a section of tiki options.

Cocktail traditionalists may browse the list with furrowed brow, but Vasquez’s pairings are undeniable. After tasting the drinks with the food, it’s clear that the bit of ginger syrup helps balance the creaminess of your lamb korma, and those earthy-sweet notes in the chocolate bitters enhance the spice of your friend’s channa masala.

In fact, adding in a bit of fruit or spice is one of the tricks of pairing Indian food with cocktails, Vasquez says. “For people who want to make cocktails at home to pair with their favorite Indian dishes, the basic is having a nice recipe for syrups and mix those with fruit juices and purees, then with some neutral alcohol and liquors,” he says.

The idea of whipping up some syrups for your home bar may sound like something only a pro bartender could handle, but it’s quite easy. Simple syrup lives up to its name — it’s equal parts sugar and water. You barely even need a recipe. Add a teaspoon or two of vanilla extract, and you’ve got vanilla simple syrup. Steep with a few slices of orange peel and voila! Orange simple syrup.

“The point is to create something with balance between sweet, sour, salty, bitter and even adding something to pair up with the umami flavor,” Vazquez says. “In doing so, the other flavors pop — they’re both more noticeable and taste better.”

Don’t be shy about building your cocktail’s flavors, either. You want to develop both contrasting and complementing notes in the drink.

“If the dish has some spices like cinnamon, cardamom, cloves, bay leaf, or spicy powders, I would use something to calm all those flavors — something fresh and fruity so every bite is the same as the first one,” Vazquez says. “On the other hand, I would also use similar flavors in my cocktail ingredients, something spicy or salty, or cocktails that contain homemade syrups of Indian spices, so the flavor builds with every bite.”

So, let’s say you’re tucking into palak paneer. Try steeping a chunk of green bell pepper in simple syrup, and add a dash to your dry gin Martini. The infused syrup will harmonize with the vegetal notes of spinach, while cutting through the creamy paneer. If you’re a tikka masala fan, go for a Painkiller with a dash of ginger simple syrup. The pineapple juice will brighten the masala spices, and the ginger in both your drink and dish will play off each other.

Or, try India Rosa’s take on a Boulevardier. Vasquez loves it with the restaurant’s shrimp malai, a creamy spiced curry.

Beverage director Fidel Vasquez serves this cocktail smoked, but if you don’t have a smoker at home, you can get tasty results while skipping that step.

The article A Montreal Bartender Wants You to Pair Indian Cuisine With (Really Good) Cocktails appeared first on VinePair.