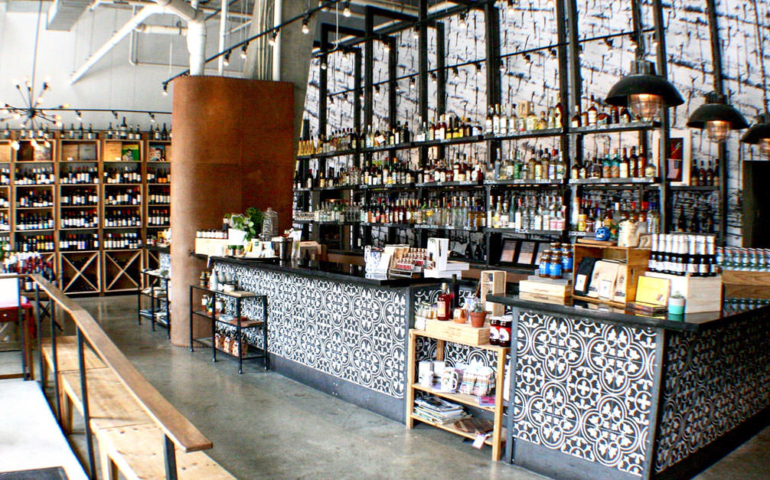 Politics aside, Washington, D.C., has undergone a remarkable transition in recent years. Its dining scene has evolved from cookie-cutter steakhouses and chain restaurants (plus a reliable handful of Ethiopian-American destinations), to boldly creative bars and restaurants showcasing culinary influences from the Mid-Atlantic and around the world.

The wine scene is evolving, too. Until quite recently, there were very few places Washingtonians could go to learn more about “New World” wine from places like Argentina, Chile, and Uruguay, and be able to take home a bottle to enjoy with their family and friends.

For owners and friends Julio Robledo and Pedro Rodriguez, opening a specialty wine store presented an opportunity to raise awareness about the diversity of Latin American wine. It was also chance to embrace their cultural identity and improve the representation of Latin America across the city.

“We met in late 2007, working for a Latino-focused non-profit organization,” Robledo says. “For both of us, wine has always been our passion. I remember growing up as a kid in Chile, seeing a bottle of wine would mean happiness — at family barbecues, holidays, birthdays and so on. Through a bottle of wine, we can tell a story, share how we grew up, and, in a way, bring part of our family here to the city.”

Owners and friends Julio Robledo and Pedro Rodriguez see Grand Cata as an opportunity to raise awareness about the diversity of Latin American wine.

After five years of conducting market research, Robledo and Rodriguez both made the decision to go into the wine industry full-time and opened the doors to Grand Cata in March 2016 in D.C.’s Shaw neighborhood.

“We were super lucky to find a great location in a historic, ‘transitioning’ neighborhood,” Rodriguez said. “Our vision was to bring value to the neighborhood and that’s what we continue to do. D.C. is a transient city, and we love that we’ve always got new clients coming in, as well as our regulars who have become friends and help us bring in new business.”

When you walk into the open-concept wine shop, you’re immediately greeted by the sounds of Latin music blaring over the speakers and by the very friendly staff, called catadores. On the left lie New World wines from Argentina, Bolivia, and Chile, plus a few selections from Oregon and California. On the right are wines of the Old World, including Italy, Spain, and Portugal, along with an impressive selection of cava and other sparkling wines.

There are also spirits like mezcal and pisco, cold beer, and various snacks and cheeses. In addition, Grand Cata hosts a monthly wine club, providing another way for wine lovers old and new to connect directly with the owners and learn more about wines that hail from Latin America.

“What’s great about Grand Cata is showcasing the vastness of wines and spirits from the region and different producers,” Julia Coney, a Washington, D.C.-based wine and travel writer and educator, says. “Their selection is a great curation of passion and exploration, which is what wine is all about.”

Wine has been made in Latin America for over 400 years, but, for many in the United States, Latin American wine has a reputation of being cheap or unrefined. But that couldn’t be further from the truth, experts say.

“I’ve had great Nebbiolo from Uruguay and great sparkling wine from Brazil,” Brett Kroll, one of Food & Wine’s 2018 Sommeliers of the Year, says. “Don’t sleep on the under-the-radar appellations that aren’t household names.”

Kroll’s wine bar, Maxwell Park, opened in June 2017 and is just two blocks south of Gran Cata in Shaw. Maxwell rotates about 40 wines per month, and, like the founders of Grand Cata, Kroll constantly encourages wine enthusiasts to take their palates out of the comfort zone.

“Latin America has been in a box with certain grapes but has much more diversity than people realize,” Kroll says.

“We love the challenge of changing customers’ perceptions and pushing the wines from the region,” Rodriguez says.

Kelly Mitchell, a wine educator and sales representative for Skurnik Wines, works directly with producers to provide her clientele only the best wines from across the globe.

“What stands out to me are the wines I work with from Argentina that are from limestone soil vineyard sites,” Mitchell says. “Fresh and elegant expressions of varieties are the trend of progressive winemaking globally.

“One example of this is the wines from Altos Las Hormigas, which are from the Uco Valley sites of Gualtallar — true limestone soils that impart a beautiful minerality on Malbec,” Mitchell says. “Additionally, the grapes are picked at optimal ripeness, which is a tedious process given the warm and hilly vineyards of Mendoza. Carefully picking grapes that are ripe and still fresh sets these wines apart from others from the region.”

Grand Cata’s selection includes wines made from grapes like Malbec, Syrah, and Pinot Noir, as well as Cinsault, Pais, Carignan, and Semillon — and that’s just from Chile alone. Robledo, Rodriguez, and the catadores kindly guide customers to the bottle that is just right for them. Prices are handwritten on the back of the bottle and tend to be more affordable than bottles of similar caliber from other regions.

“We love the challenge of changing customers’ perceptions and pushing the wines from the region — we taste every bottle on the shelf and can talk about it,” Rodriguez says. “We specialize in honest wines that showcase the true character of the grapes, regions, and styles. Therefore, most of them are small-scale production, sustainable, organic and/or natural.”

As Grand Cata continues to spotlight winemakers from across Latin America, Robledo and Rodriguez hope to accomplish many things, including growing consumer awareness and their business’s footprint. Ultimately, they want to continue to establish themselves as key wine players in Washington.

“Our main goal as a company is to become Latin American ambassador of all things wine, gastronomy, and culture.” Rodriguez says. “This is an endless task, and we love it.”