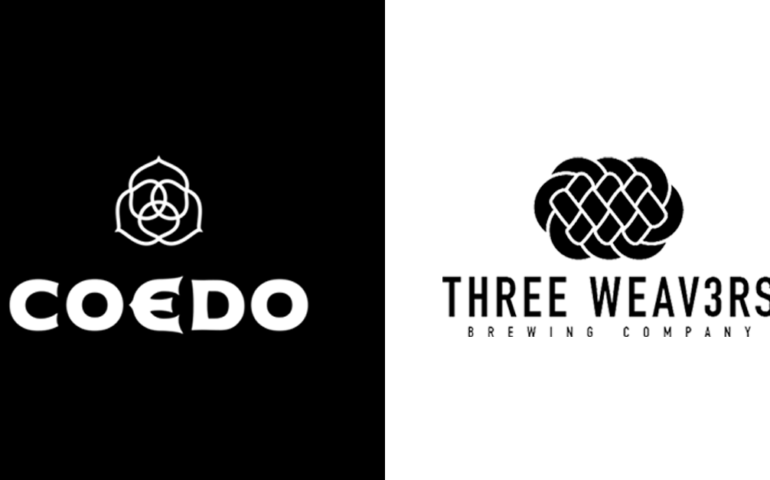 Komorebi, a team effort between the two breweries made at Three Weavers in Inglewood, Calif., combines America’s favorite craft beer style, IPA, with a special ingredient known to be cultivated in Japan, hibiscus.

“We came to the decision to make it hoppy and tart, and we wanted to add a color that actually had positive flavor impact for the beer. So, we used hibiscus,” she says. “We’re showcasing that, in harmony with the rest of the beer.”

Komorebi is made with “a ton of hops” — Galaxy, Citra, and Strata — that add tropical aromas and flavors, Nowell says. It’s also made with lactobacillus, which adds light tartness. “The beer is immensely drinkable, [and while] it has a lot going on, the ingredients marry together nicely.”

Komorebi gets its name from a Japanese word meaning “the feeling you get when you see light filtering through leaves,” Nowell explains. “It’s very romantic. We wanted to invoke some traditional Japanese aesthetic into the entire thing.”

According to Nowell, the label design also reflects the Japanese aesthetic. “I love Japanese design,” she says. “This is the can that I’ve always wanted for Three Weavers, but was never on brand. Having COEDO Brewery involved was a perfect opportunity.”

COEDO Brewery Kyodoshoji Corp., Ltd., a Japanese craft brewery based in Japan’s Saitama prefecture outside Tokyo, is owned by a family of organic farmers. It is known for creating Japan’s first sweet potato beer in 1996. COEDO’s focus on Kawagoe culture made it the perfect fit for Three Weavers.

“This whole project was to showcase Japanese Craft Beer in the U.S.,” Nowell says.

Komorebi will be a limited-edition brew launching at Three Weavers Brewing on Feb. 27, 2019.

This article is sponsored by Japanese Craft Beer.

*To gain more visibility and influence, 23 Japanese craft breweries, including COEDO Brewery Kyodoshoji Corp., Ltd., have banded together to form Japanese Craft Beer, an industry association devoted to increasing awareness and promotion of Japanese craft beer in the U.S.