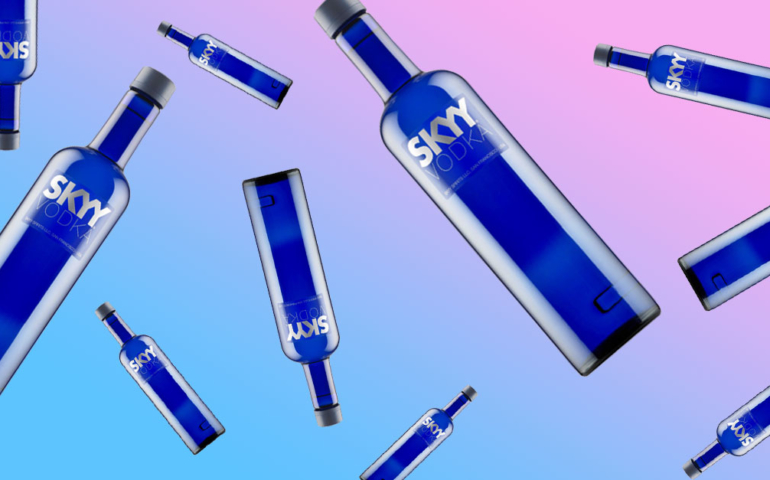 “Every third drink ordered in the U.S. is a vodka drink,” Melanie Batchelor, VP marketing, Campari America, wrote VinePair in an email. Skyy is often what’s in the glass: It ranked eight out of 10 in the world’s best-selling vodka brands in 2018.

Launched in San Francisco in 1992, Skyy sold to Gruppo Campari in 2006. It’s now a household name among vodka drinkers, and its history spans attention-grabbing ads and LGBTQ initiatives around the globe.

Read on for nine more things you should know about Skyy vodka.

It’s made of America.

Skyy claims to be one of the first vodkas made entirely with American grains and water. It also pioneered proprietary quadruple-column distillation and triple-filtering processes. Skyy says its methods remove impurities and bring out a “citrusy, spice-like scent.”

It proudly supports LGBTQ initiatives. A lot of them.

Skyy partnered with Amazon Prime and Freedom for All Americans to help raise awareness around LGBTQ equality, particularly transgender rights, as an official partner of the show “Transparent.”

It also aired the first lesbian-couple TV commercial, Batchelor wrote. “[Skyy] was actually the first spirits brand ever to have an ad featuring lesbians and promoting LGBTQ marriage rights,” Batchelor wrote. The ad, called “The Proposal,” was unveiled in 2002.

Skyy thinks everyone should put a ring on it (if they want to).

Also in 2018, Skyy debuted a limited-edition run of Skyy Yyes cans in Australia touting the December 2017 legalization of same-sex marriage in that country. The cans featured a removable pull-tab made to look like an engagement ring. The label also featured a rainbow version of the Skyy logo. The Yyes cans launched in time for the 40th anniversary of the Sydney Gay and Lesbian Mardi Gras.

A generous genius invented it.

Skyy founder Maurice Kanbar, an 89-year-old entrepreneur of more than 60 years, is a member of Mensa — he has one of the highest IQs in the world.

Kanbar is also a philanthropist. Institutions bearing his name include the Kanbar Forum at the Exploratorium, Kanbar Performing Arts Center, and Kanbar Hall at the Jewish Community Center in San Francisco; and the NYU Tisch Maurice Kanbar Institute of Film and Television in New York City.

Its founder is an idea man.

Kanbar founded Manhattan’s first multiplex movie theater, Quad Cinema, in 1972. He also reportedly holds at least 50 patents for his inventions, including the ”D-Fuzz-It” sweater and fabric comb, from which he made his fortune at age 22; the Safetyglide hypodermic needle protector, “to prevent accidental needle sticks,” SFGate reported in 2012; and the Tangoes Puzzle Game.

It’s made for (vodka) Martinis.

According to Skyy’s origin story, Kanbar created the product because he was in search of the perfect Martini.

Skyy claims its Infusions line of flavored vodkas is “true to fruit.” Options such as Bartlett Pear, Blood Orange, and California Apricot derive their flavors from real fruit, rather than artificial flavorings.

It once outranked Grey Goose.