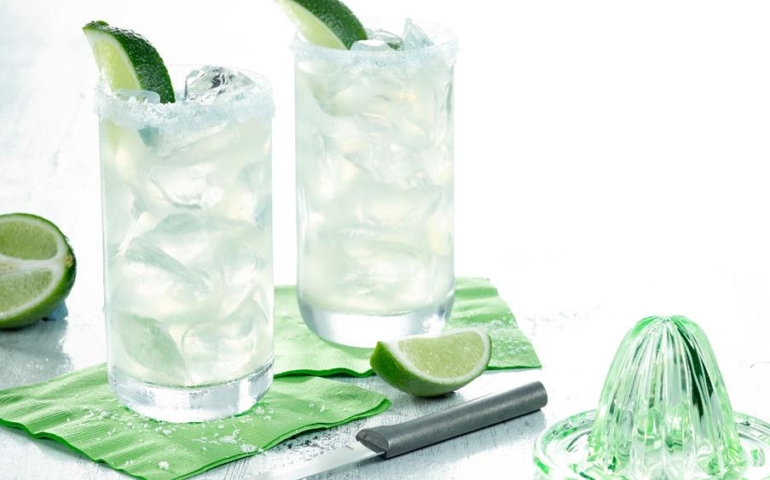 Well, we’ve finally made it to the 21st-century version of the “Roaring Twenties” but thanks to the pandemic, we won’t be enjoying any Gatsby-Esque cocktail parties or jazz-fueled soirees anytime soon. Even so, anyone hoping to polish up their home-mixology skills can find plenty of inspiration in the ingenuity of 1920s bartenders.

These 9 cocktails in particular pay fitting tribute to 1920s cocktail traditions of the time, reminding us that, even when things get tough, it’s always possible to turn lemons into lemonade or cocktails.

We at The Manual have written before about our love for the French 75 and its masterful blend of gin and Champagne. As it happens, this fizzy brunch hero became especially popular during the Prohibition era … albeit in Paris, where American ex-pats like F. Scott Fitzgerald and Ernest Hemingway could drink to their hearts’ content without any pesky government interference.

“The French 75 was a Roaring ’20s classic made with gin, champagne, and lemon. [It’s] what I might call a ‘bare bones’ cocktail, meaning [that] it’s a very simple cocktail with simple ingredients. So it’s important to use quality ingredients to really let it shine,” explains bartender Julian Flores of Bar Henry in Los Angeles.

Flores likes to adhere to a classic French 75 recipe when mixing this beverage, but he’s very particular about his base spirit and choice of bubbly: “Although [French 75s are] classically made with London dry gin, I like to use Amass Gin. Still, a ‘dry’ gin, Amass has a softer and more floral palate that I think creates a more delicate and interesting cocktail. To help balance the softness of the gin, I use a Méthode Champenoise sparkling Vouvray. Specifically, Domain Pinon Brut de Brut. This sparkling wine has high acid that elevates the gin, [along with] a proper amount of breadiness that holds up to the citrus.”

“The Gin Rickey was a really popular drink during Prohibition times, most likely due to its simplicity,” says bar manager Cari Hah of Big Bar in Los Angeles about her preferred gin-based 1920s cocktail, which traditionally consists of gin, lime juice, and soda water.

However, Hah likes to play around with the typical flavor notes of a Gin Rickey in order to achieve a more balanced profile, telling us that “I personally feel that the traditional recipe is a bit too tart, so the addition of Pomp & Whimsy gin liqueur actually gives the drink a natural sweetness while adding a complexity of flavor that a simple gin, lime & soda cannot match. It’s perfect!”

Gin cocktails appeared at many a 1920s speakeasy, largely because gin was relatively easy for enterprising amateur distillers to make on their own. Their efforts yielded a product popularly known as “bathtub gin,” which quickly garnered notoriety for its potency and its astringent flavor. “Prohibition-era cocktails focused on covering up the usually poor-quality spirits they had available during Prohibition,” says head bartender Isabella Marriott of Bar Beau in Brooklyn, NY.

“The Bee’s Knees [included] the perfect balance of sweet and tart flavors to mask the overpowering flavors of the bootleg gin of the time,” Marriott offers as an endorsement of this classic ‘20s libation made with gin, fresh lemon juice, and honey. She follows the time-honored recipe, but encourages Bee’s Knees dabblers to “use local wildflower honey, and a higher-quality gin.” Her gin pick for this cocktail? “Barr Hill gin, or any quality dry gin with nice floral notes.”

Another 1920s cocktail favorite using gin as its focal point, the Southside “takes the three-ingredient easiness of a gimlet and dials it up a notch with mint muddled in the shaker and a dash of orange bitters,” says cocktail director Lee Noble of Art in the Age in Philadelphia, referring to The Southside’s formula of gin, lime juice, simple syrup, orange bitters, and muddled mint.

The Southside sounds a bit like a gin spin on a mojito, but it has a mythology all its own, according to Noble: “[The Southside is] rumored to have been named after the neighborhood in Chicago where Al Capone ran his racket. Since he was the most infamous bootlegger during Prohibition, it follows that we keep an homage to him on [any ‘20s-inspired] menu.”

The Singapore Sling may owe its heritage to the cocktail movements of the 1910s and 1920s, but this drink, which involves gin, Grand Marnier, cherry liqueur, herbal liqueur, and pineapple juice, experienced a major resurgence in the 1980s. However, these new interpretations of the traditional Sling — which tended to go heavy on alternate ingredients like grenadine — didn’t present the cocktail in the best possible light, as beverage director Jason Stevens of La Corsha Hospitality in Austin laments: “The Singapore Sling, an incredible proto-Tiki/pre-Prohibition classic, has been so maligned over the years that it’s hard to think of it as anything other than an overly sweet, artificial disco drink.”

That said, Stevens still thinks that there’s ample opportunity for today’s beverage enthusiasts to enjoy and appreciate Singapore Slings in the spirit for which they were intended. “When [a Singapore Sling is] made with a little love and care, it’s dressed upright and it feels respectable — as if [you’re sending] ingredients like gin and herbal liqueur on an island vacation,” Stevens insists.

A take on the martini invented at the turn of the 20th century but popularized during Prohibition, the Hanky-Panky was devised by Ada Coleman, the first female lead bartender at the famous American Bar at the Savoy Hotel in London. In terms of ingredients and prep, the Hanky-Panky shines in its simplicity — it contains only London dry gin, sweet vermouth, and Fernet-Branca amaro.

Nevertheless, a skilled hand — like that of bar director Liam Baer of Pretty Dirty in Los Angeles — can introduce additional ingredients and flavors to the Hanky-Panky without overburdening the cocktail and while showing the utmost respect for its original recipe. “As the intention at Pretty Dirty is to offer something exclusive in regards to our classics, we substitute gin for genever and utilize house blends of vermouths, Fernets, and sherry,” Baer says of his own Hanky-Panky rendition.

“A Prohibition-era cocktail that I love seeing out and on a cocktail menu is a well-made Sidecar. Coming to us from Harry’s New York Bar in Paris during the 1920s, this marriage of brandy, orange liqueur, and lemon juice is simple and yet allows for so much variation depending on ingredient selection. Whether made with a robust American brandy or a more delicate cognac and paired with a bright triple sec or a more tart and complex curaçao, a Sidecar is always a delight and is a wonderful way to measure the development of your bartending technique and your palate,” bar specialist Cameron Shaw of Lot 15 in NYC tells The Manual. The traditional Sidecar recipe typically includes Cognac, but Shaw urges home bartenders to select whichever aged brandy they prefer.

Today’s prestige bartenders take great inspiration from the cocktails of the ‘20s for many reasons, but these vintage sippers’ use of only a handful of ingredients to create unique flavor blends counts among the most significant. While fruit juices exerted a major influence over these cocktails, spirits like sherry and vermouth delivered nuance and depth to beverages like The Bamboo, a sherry-based beverage beloved by spirits director Jordan Smith of HALL by ODO in NYC.

Smith plays around with the classic Bamboo recipe by using both dry and sweet vermouths and adding a couple of lemon twists to boost the citrus aromas of the orange bitters.

Named for a film actress widely considered the premier ingenue of the 1910s and 1920s, the Mary Pickford mixes white rum with maraschino liqueur, pineapple juice, and grenadine, resulting in a sweet, fruit-forward, chilled libation. “If it was up to me, I’d [like to see] the Mary Pickford cocktail make a comeback. With white rum and tropical juices, it’s the perfect summer cocktail and a 1920s classic that is included in the International Bartenders Association cocktail book. Rumor has it, the cocktail was made by a hotel bartender for actress Mary Pickford when she was in Cuba with Charlie Chapman,” beverage director Miki Nikolic of Double Dealer in New Orleans says in support of this classic warm-weather fave.