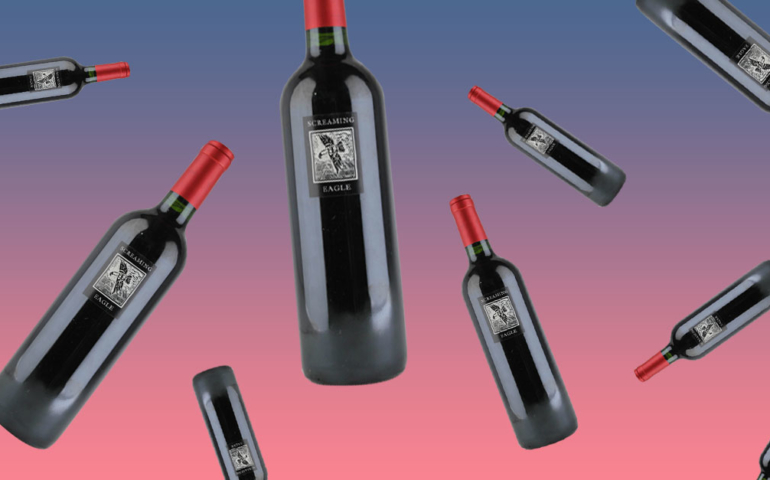 At the 2000 Auction Napa Valley, a 6-liter Imperial bottle of 1992 Screaming Eagle Cabernet Sauvignon sold for $500,000. And that’s not the most remarkable thing about the sale.

Normally, when wines fetch hundreds of thousands of dollars at auction, they’re European, ultra-rare, and extremely old. That this deep-pocketed bidder was willing to spend half a million dollars for an 8-year-old Napa Valley Cabernet Sauvignon demonstrated the significance of the label — and its category.

8 Things You Should Know About Screaming Eagle Winery

There’s no official definition of what qualifies a winery as having “cult” status, though its wines are typically hard to find, high quality, and extremely pricey. With just 57 acres of vineyards, and an annual production of around 500 cases, Screaming Eagle is the kind of producer that almost all enthusiasts have heard of, but very few get to try.

Robert Parker is a superfan.

Screaming Eagle received almost instantaneous fame after Napa-Cab-loving wine critic Robert Parker gave its first 1992 vintage a near-perfect 99 out of 100 rating. The winery would eventually receive the magic 100 Parker points for its 1997 vintage, as well as its 2007, 2010, and 2012 bottlings.

Screaming Eagle makes the most expensive wines in America.

The sky-high prices associated with Screaming Eagle come from bottles sold on the secondary market. For a cheaper, three-figure alternative, drinkers can buy directly from the winery’s mailing list.

In order to do that, however, buyers must first sign up for the waiting list. It’s no easy task. During a 2012 interview, winemaker Nick Gislason suggested the time it takes to make the mailing list after signing up is around 12 years (roughly the same amount of time most of us need to save up for one bottle).

Screaming Eagle is out to tackle counterfeiters.

Given the vast sums bottles command, and a surge in high-profile counterfeit wine cases, drinkers understandably want reassurance their bottle of Screaming Eagle Cabernet Sauvignon is the real deal.

Starting with its 2010 vintage, the winery protects all bottles with a “bubble-coded” verification system — a label placed between the foil and the bottle that creates a security seal that cannot be detached without it and the foil being visibly damaged. Beneath the seal, bottles contain unique identification codes that can be verified on Screaming Eagle’s website.

Don’t think of planning a winery visit any time soon.

Given its extremely low production, there simply isn’t enough wine to offer tourist tastings. So while many other Napa wineries are plush with carefully organized visitor experiences, Screaming Eagle keeps its doors locked shut to the public.

Its owner is a sports-loving billionaire.

In 2006, Philips sold Screaming Eagle to Charles Banks and Stan Kroenke for an undisclosed sum, rumoured to be around $30 million. Kroenke became the winery’s outright owner after buying out Banks in 2009.

With a multi-billion dollar fortune amassed through his successful real estate company (and marriage to a Walmart heiress), Kroenke’s other holdings include the Los Angeles Rams, Denver Nuggets, Colorado Avalanche, Colorado Rapids, and Arsenal Football Club in the U.K.

Its winemaker is a 30-something-year-old sensation.

When winemaker Nick Gislason joined Screaming Eagle in 2010, he was fresh out of U.C. Davis and just 26 years old. Gislason had some winemaking experience working in Napa and New Zealand, but his first official position was assisting winemaker Andy Erickson, a Napa Valley superstar whose other employers include Harlan and Mayacamas Vineyards. Gislason took over as sole winemaker in 2011 when Erickson, then a consultant, stepped down.