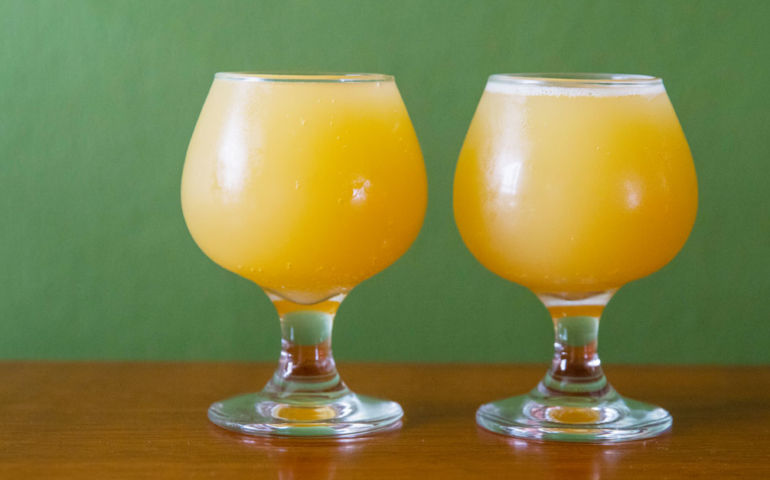 Last year, VinePair rounded up a selection of our favorite widely available New England-style IPAs. While there are lots of exceptional versions of the style being made in small batches at breweries without broad distribution, we wanted to focus on regional and national brands that readers can find (relatively) easily.

This was a challenge then and now. In the past year, however, many more hazy and juicy IPAs have joined the scene. Although a majority of highly regarded hazy IPAs like Tree House’s Haze, and any of Other Half’s hundreds of brands released to a select few fans in 2018, remain hard to find, we tasted more than 20 regionally and nationally available brands to compile this list. Here are eight more of our favorite widely available hazy IPAs.

A collaboration between two San Diego staples for their 30th anniversaries, Level 30 Complete Hazy IPA is intensely aromatic with floral, spicy, and herbal notes, “like dried flowers or tea leaves,” one taster said. Medium-bodied with a “dank” savory note, akin to onion or garlic, it opens up to sweeter fruity notes on the finish.

Some tasters found Fresh Haze similar to a more traditional IPA, with a pronounced malt backbone and classic West Coast pine and citrus aromas. However, its sweet orange notes and soft texture earn it a spot in the hazy and juicy category.

For one taster, smelling this beer was “like walking into a cheese shop” due to its “stinky Camembert” aroma. Another panelist picked up on cotton candy-like aromas. All agreed this beer is funky but tasty. Although not as “juicy” as a true New England IPA, Hazy Rabbit is low on bitterness and big on citrusy hops like Idaho 7, Mosaic, and Citra. Its soft texture is due to flaked oats in the mash.

Bright yellow-gold and explosively aromatic, Bell’s Official Hazy IPA has notes of mango, orange, and pineapple juice on the nose. It follows with a light body and bitter citrus note that’s “not quite hazy IPA territory,” one taster said, “but not unwelcome, either.” “It has the essence of boozy juice, like a Mimosa, without the acidic burn or tickle,” said another. Delightfully drinkable at 6.4 percent ABV, it’s like a session IPA that ramps up the tropical fruit aroma.

Juicy, hazy, and a little dangerous, this coyly named IPA sneaks a slightly high ABV (7 percent) into a palatable package. Apricot and peach flavors headline the soft, silky mouthfeel, while bitterness barely registered for many tasters.

Cloud Catcher pours shiny gold with a fluffy white head, and has perfumy floral and fruity aromas. It tastes “like peaches and cream candy,” one panelist said. Both creamy and crisp on the palate, it’s called a milkshake IPA, but is more balanced than the category’s more extreme iterations.