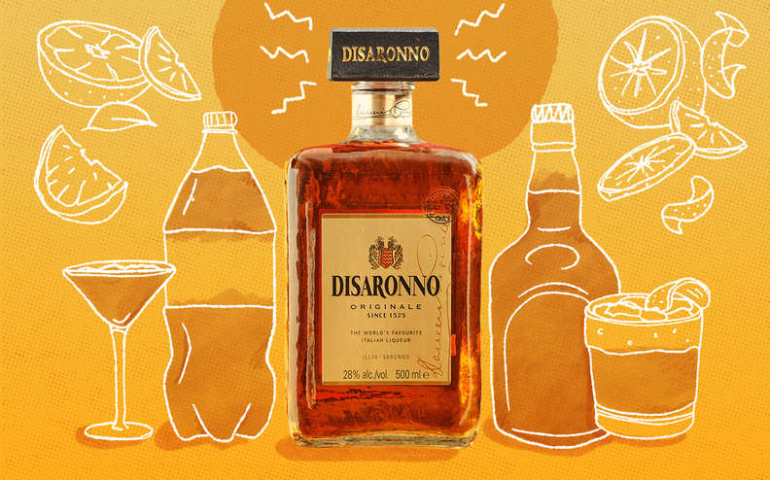 So, you bought that bottle of amaretto to mix in your cocoa and coffee this past winter when you were battling foul weather and winter sickness. But now that it’s spring, the bottle doesn’t get much use and it’s taking space on your bar. Fret not — amaretto pairs well with other mixers besides coffee and cocoa, and we’re here to tell you all about them. Here are five alternative ways to enjoy the almond-flavored liqueur even when it’s not blizzarding outside:

Mix it with ginger beer

While you might assume that mixing ginger beer with the dessert liqueur will create a cocktail that is cloyingly sweet, it’s actually bright, refreshing, and, yes, gingery — as long as you use the right ginger beer. We prefer one that’s on the spicier side, like Reed’s or Fever-Tree. Mix the ginger beer with about 1.5 ounces of amaretto, then add a couple of dashes of Angostura bitters and a squeeze of fresh lime to balance out the sweet.

Mix it with soda

If you’re not a fan of ginger beer and want the driest, least dessert take on an amaretto cocktail, simply mix the liqueur with a topper of soda water. A delicious aperitif (even if amaretto is technically a digestif), this Highball is one of our favorites all year round. If you’re feeling fancy, add a couple of dashes of absinthe for a touch of black licorice bitterness.

Mix it with bourbon

Bourbon tames amaretto’s sweetness, while the liqueur softens the whiskey’s boozy heat and brings out the spirit’s nuttiness and vanilla notes. You can either mix the two spirits in a glass neat — using equal parts of each — or make a variation on an Old Fashioned using the liqueur in lieu of simple syrup. Add a couple of dashes or either orange bitters or black walnut bitters and you have a potently fragrant nightcap.

Mix it with scotch

While adding equal parts of scotch and amaretto will get you the disco-era staple known as the Godfather, the two spirits work together in other ways as well. You can mix them with seltzer, tonic, or sparkling lemonade for a smoky and sweet Highball. You can riff on the Rob Roy by replacing sweet vermouth with equal parts fino sherry and amaretto. Or, if you really want to try something off-beat, you can make a Poison Dart with a scotch in place of bourbon and amaretto instead of orgeat. It makes for one of the most unusual, yet refreshing, tiki libations ever.

Mix it with citrus

Fresh citrus is one of the best compliments to the nuttiness of amaretto. While most amaretto drinkers are familiar with an Amaretto Sour — which pairs the liqueur with the zing of lemon juice — the spirit works just as well paired with lime, pineapple, or orange juice. Substitute amaretto for orgeat in a Mai Tai, or use it in place of agave syrup in a Margarita (use a reposado tequila rather than a Blanco). It also works surprisingly well in a Screwdriver in place of vodka. Feel free to also float it on top of a Painkiller or a Piña Colada as an extra boozy garnish.