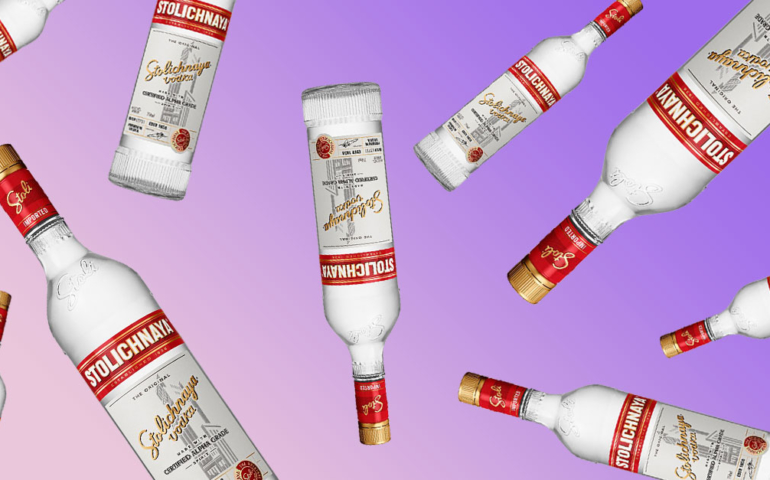 Stolichnaya (stow-LEECH-na-ya), better known simply as Stoli, is a familiar bottle on the liquor store shelf, and one of the top-selling spirits brands in the world. But there’s a lot more to the clear spirit than meets the eye — such as a murder mystery, a Russian or not-so-Russian heritage, and a checkered past with the LGBTQ community.

Below, here are 14 more things you should know about Stolichnaya.

Stolichnaya was trademarked in 1938, but it’s origins are a bit mysterious, and also austere (having a period of rigid state control in its past). The brand was born sometime around the turn of the 20th century, when the Russian government took control of vodka production and started distilling Stolichnaya in the Moscow State Wine Warehouse No. 1, also known as the saddest name for a distillery in the world. It didn’t stay in the state’s control. By 1999, it was being produced privately.

Born in Russia, made in Latvia.

Stolichnaya is Russian by name, but it’s not totally Russian. It’s produced both in and outside of Russia. The wheat used to make the spirit is grown in Russia at a place called Tambov, and partially distilled at a facility called Talvis. However, the major work is done at a distillery called Latvijas Balzams in Riga, Latvia.

Stoli is produced by an anti-establishment Russian billionaire.

You know how Whole Foods is owned by Amazon, which is owned by Jeff Bezos, who is in turn owned by one of the Kings of Jupiter (or probably something like that)? That’s somewhat similar to how Stolichnaya works.

The brand falls under Stoli Group, which in turn functions under the SPI Group, which is owned by Yuri Shefler. Shefler is a billionaire who has had some colorful vocal disagreements with the Russian government, including with Vladimir Putin himself. (When you’re that rich, you can get into arguments with governments and dictators, instead of the guy who made your sandwich wrong.)

Stoli’s parent-company founder may have been framed for murder… by Putin.

SPI Group purchased Stolichnaya in 1999. SPI Group is owned by Russian billionaire Yuri Shefler. Over the course of his opinionated billionaire-ship, Shefler came into the crosshairs of the Russian government, including none other than Vladimir Putin. Shefler even stepped down from the rolls of his own company, SPI, because of all the heat thrown his way by Putin and crew. Among the (maybe apocryphal) accusations: that Shefler had once “[threatened] to kill the former Russian Agriculture Minister.”

The LGBTQ community once boycotted Stoli, but it was kind of by accident.

Not very long ago, there was a big, misplaced anti-Stolichnaya boycott on behalf of LGBTQ rights. In 2013, Vladimir Putin passed the so-called “gay propaganda” law, supposedly “aimed at protecting children from information promoting the denial of traditional family values,” a very thinly veiled tactic to enforce the heteronormative lifestyle by banning visibility (and viability) of the LGBTQ lifestyle.

LGBTQ activists rightly responded with protests and product boycotts, but incorrectly included Stoli on the list, considering it a Russian product — when in fact it’s been made in a historic distillery in Latvia since 1948 and is owned by a man who is Russian but constantly at odds with Putin himself (see: framed for murder, above).

Stoli made it right, anyhow.

It co-sponsors a next-level LGBTQ bartending competition. Founded in 2013 by Stoli’s LGBTQ ambassador Patrik Gallineaux, the Key West Cocktail Classic has grown into a nationwide LGBTQ bartending competition yes, but it’s also a massive declaration of presence and pride for the LGBTQ/gay-bar community at large. The competition takes place over the year, with bartenders nationwide competing for a chance to make it to the finals at Key West Pride.

And while no bartending competition is ever easy, the Key West Classic adds elements of stagecraft and also asks participants to incorporate elements of an annual theme. (This year: The Stolimpics.) Add precision timing, humor, glamor, a Real Housewives of Dallas and Lance Bass, and it’s a next-level competition. Now we just have to hope we’re de-quarantined by the time Key West Pride rolls around this June (alternately, we’re happy to watch remotely as bartenders do their thing, as long as at-home Stoli supplies don’t go the way of TP).

Like delicious Borodinsky bread, it’s made with wheat and rye.

When you take a bite of traditional Russian Borodinsky bread, you absolutely taste the wheat and rye, and its magical mixture of dark and sour and spicy flavors. However, considering how vodka is made, it’s arguable whether Stoli’s base material of wheat and rye has an impact on the final flavor of the distillate. But in the spirit of pairing food and beverage with ties to the same region, this is the only time we’ll recommend vodka as a possible pairing for toast.

With all that wheat, it’s still gluten-free.

Yes, this vodka is made from wheat and yes, like Smirnoff, Stolichnaya likes to tout the fact that it’s gluten-free. How can that be? Since the distillation process involves repeatedly stripping away everything but ethanol, what remains in a bottle of wheat-based Stoli has as much to do with a grain of wheat as something Blue Razzberry-flavored has to do with a raspberry bush.

That said, although it’s generally accepted to be gluten-free, some gluten-sensitive people still report negative effects after drinking gluten-free booze, so it’s best to steer clear if it’s a sensitive issue. Remember, you can make vodka with anything.

Stoli’s lineup of flavors reads like a tipsy trip to the produce department that trails off into the candy aisle. There’s Lime, Cucumber, Blueberi, Razberi (their spelling); and there’s also Salted Caramel and “Stoli Hot” (which has smoky Jalapeno heat and kind of begs to be tested out in some sort of Slavic spicy Margarita). Stoli also has a new gluten-free vodka, which it’s calling “THE Vodka,” certifiably gluten-free with 88 percent corn and 12 percent buckwheat in the grain bill. (Stoli also makes non-alcoholic Ginger Beer, which is presumably for the next day’s hangover cure.)

In the 1970s, PepsiCo penned an agreement with the Soviet Union to ship its cola concentrate to be bottled there in exchange for increasing U.S. imports of Stoli vodka. The deal was signed in 1972, and bottling began in 1974. PepsiCo later doubled down on the deal when, in 1990, the trade agreement expanded and increased retail sales of Pepsi in the Soviet Union and Stoli vodka in the U.S. According to a report in the Los Angeles Times, PepsiCo called it “the biggest, longest-running agreement ever concluded by the Kremlin with a U.S. firm.”

And so, that’s how Pepsi became the first American product to be made and sold in the Soviet Union. It’s also how Stoli made massive inroads into the U.S. market in the 1970s (which might explain the emergence of the terrycloth bodysuit).

It was the first Russian vodka export.

Witness this uber-Russian Stoli ad which, despite appearing like Cold War-era propaganda, apparently aired in 2007. According to the ad, Stolichnaya was the first exported Russian vodka; per the above PepsiCo agreement, Stoli was shipped to the U.S. beginning in 1974 in exchange for Pepsi.

It’s made with artesian water. That’s not really important.

OK, to clarify: Artesian water is a real thing. Geology.com describes it as water that’s more the result of “an interesting geological situation” than anything chemically unique or delicious. However, considering artesian water has tremendous interaction with Russian rock and soil, there’s something to be said for the idea that it transmits elements of the strong, hard Russian turf to the finished vodka. (Is there a Russian word for terroir?)

Its many cameos include a James Bond movie, and a very uncomfortable Eminem/Rihanna music video.

Not every Bond favors Stolichnaya (we get it, Craig, you’re smoldering and different). But the one who did — Roger Moore — liked it a lot. In “A View to Kill,” he drinks some Stoli in an iceberg submarine, because that’s a thing, after taking a microchip out of the body of his fellow agent in Siberia (and that’s all within the first 10 minutes). AbFab fans already know that Stolichnaya is Patsy’s favored 11 a.m. tipple.

A bottle of Stoli also gets a (fun?) cameo in Eminem and Rihanna’s “Love the Way You Lie” music video (it’s around 2:00 when a former Hobbit goes to steal a bottle).

Roger Sterling was a fan of Stolichnaya (he even listened to the stuff). But the action of “Mad Men” took place in the 1960s and Stolichnaya didn’t make it to America until the great Pepsi-Stoli swap of 1974 (see above). So every appearance of the bottle was a little delicious oopsies. Or else, like so many characters involved in the making of “Mad Men,” they just stopped caring.

The article 14 Things You Should Know About Stolichnaya Vodka appeared first on VinePair.