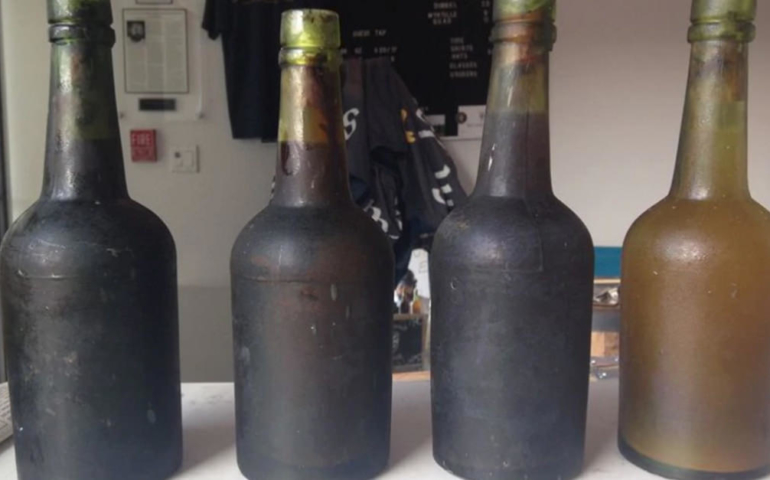 Last week, reports of a New York brewery teaming up with a nearby university to reincarnate a 133-year-old shipwrecked beer went viral.

Serious Brewing Company of Howes Cave, N.Y. and the State University of New York at Cobleskill (SUNY Cobleskill) announced plans to extract and analyze yeast from the beer, which was discovered off the coast of Long Island in the wreckage of the SS Oregon.

The discovery was exciting — but it turns out, it’s already happened. Saint James Brewery of Holbrook, Long Island is already working on a similar project with beer bottles from the very same shipwreck.

Saint James Brewery of Long Island plans to release SeaKing, a beer made with yeast from the SS Oregon shipwreck beers, in March.

According to Syracuse.com, Saint James Brewery owner Jamie Adams, who has been diving on the SS Oregon shipwreck for 20 years, planned to debut his own reincarnation of the 1800s-era English ale at the New York State Brewers Fest on March 9.

Adams said the brewery held off on publicly announcing the beer until it was ready. “Now, it’s ready,” he said.

Felter had reportedly received the bottle from a customer who also collects artifacts from the SS Oregon. He took the bottle to SUNY Cobleskill’s biotechnology lab, where students are working to extract and analyze the yeast. Felter even took a swig. “The taste was like barleywine/vinegar/cider,” Felter said. “It was acidic. We’re just hoping some of the yeast survived.”

The SS Oregon departed from Liverpool, England in 1886 and was headed to New York City. It crashed into a schooner near Fire Island, AP reports.

Adams may be the first brewer to discover the SS Oregon bottles, but beer was common cargo in past centuries. In 2016, divers found a 220-year-old beer off the coast of Australia, which was recreated by James Squire Craft Brewers. In November 2018, a 150-year-old bottle of Tennent’s beer originally found in the 1970s near Melbourne was returned to its rightful home of Wellpark Brewery in Glasgow, Scotland.

And last week on land, 113-year-old beers were found under the floorboards of a former brewery in Viborg, Denmark.