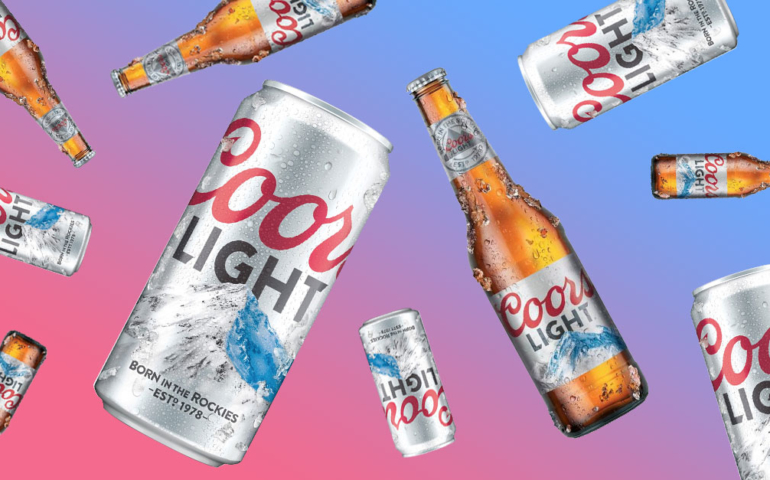 Before Coors Light, Coors’ original label, Coors Banquet, was marketed as “America’s fine light beer.” In 1978, the brewery launched Coors Light to compete with other brands like Miller Lite, launched in 1973; as well as Natural Light and Schlitz Light, both launched in 1977. The lighter-than-light beer launched 105 years after the brewery was established in 1873.

The ‘Silver Bullet’ was a shot in the dark.

Coors Light’s now-iconic “Silver Bullet” can was designed by a Cuban-American artist, Marc Barrios. Barrios emigrated to the U.S. at age 15, and began working for Coors’ art department in 1969.

In 1975, an encounter with Pete Coors encouraged the young artist to submit his designs for the new Coors Light can. His idea to eliminate the cream-colored background featured on the Coors Banquet can was a hit.

Barrios eventually moved up the ladder and became Coors’ head of creative services. His career later took him to Hollywood, where he worked on promotional materials for films such as “Apollo 13,” “Jurassic Park,” and “Batman.”

The can got its nickname from (who else?) college students.

According to the MillerCoors blog, the “Silver Bullet” nickname shot off in the late 1980s, becoming part of the country’s collective lexicon by 1991.

In Pete Coors’ 1998 book, “Coors: A Rocky Mountain Legend,” he writes that “students began asking for the Silver Bullet in bars. We thought it was a pretty good moniker.”

Its first delivery may have required safety escorts.

On Aug. 23, 1978, the first trucks of Coors Light rolled out of the Golden, Colo., brewery with 23,000 cases on board. “Law enforcement agencies in the various states where the convoy traveled were notified in advance and provided safety escorts in and near various cities,” read Coors’ company newspaper. It’s unclear whether this was a joke.

Its 1980s Halloween-themed ads were chilling.

Although Halloween is now a drinking holiday for adults, this wasn’t always the case. Former brand director Gary Naifeh said he believes Coors Light was “the first brand to really promote Halloween in a big way. And it turned into a phenomenon.”

That phenomenon took the shape of the “Beerwolf,” a disturbing promotional character that donned billboards, TV commercials, radio spots, and even pre-recorded point-of-sale speakers in grocery stores. He even snuck into non-Halloween campaigns, like St. Patrick’s Day, and this creepy fishing trip.

Remember those Coors Light commercials that pitted Ice Cube against inanimate bottles of Coors Light in a silent icy battle? Neither do we, but they happened.

Did we mention it’s cold?

In December 2018, Coors Light parent company MillerCoors announced plans to revive its “World’s Most Refreshing Beer” tagline for television commercials. It said the reason was millennials’ lack of awareness about its “Cold Activated” cans, which turn partially blue at refrigerator temperature.

“We are going back to truly being the ‘World’s Most Refreshing Beer,’ rooted in our ownership of cold,” Ryan Reese, Coors VP, wrote. “When the mountains turn blue, it means Coors Light is at the perfect temperature to bring refreshment. And younger consumers, believe it or not, didn’t know that. When we asked, they said ‘really? That’s so cool.’ And they didn’t know, because we stopped telling them.”

The following week, after news of the World War II veteran’s preference went viral, MillerCoors surprised the centenarian with the birthday gift of a lifetime: a fully-stocked Coors Light beer fridge, killer swag, and an invitation to a tour of the Golden, Colo., brewery.

Coors Light is drinkable and wearable.

Shaun O’Sullivan, co-founder and brewmaster of 21st Amendment Brewery, admitted to VinePair that Coors Light is his guilty pleasure. “I generally have a few cans in my refrigerator for the rare moments when I don’t want a craft beer but I don’t want to drink soda or water … I like it because it’s a lot like water.” His only requirement? “That it’s cold.”

Others think there’s room for improvement.

Teri Fahrendorf, founder and president emeritus of the Pink Boots Society and former Steelhead Brewing Company brewmaster, says it makes a great base for beer experiments. “One night we had friends over and I remembered the lonely can of Coors Light that someone had left at a party. I used it to demonstrate that you could add some 88 percent lactic acid from the homebrew store to create a passable kettle sour. We all agreed the lactic acid improved the Coors Light considerably.”

In April 2018, beer distributors Kwame Anderson and Jason Gaebel encountered a man in St. Paul, Mich., planning to take his own life. Anderson, a salesman, struck up a conversation with the man, eventually talking him off the ledge of a bridge by offering him a case of Coors Light.

St. Paul Police spokesman Sgt. Mike Ernster said at the time, “Beer has been bringing people together for a long, long time. Today, it brought people together in a life-saving way.”

During the 2019 Super Bowl, MillerCoors competitor Anheuser-Busch InBev sparked #corntroversy when its Bud Light ads called out Coors Light and sibling brand Miller Lite for using corn syrup in their beer recipes. During Molson Coors’ 2018 fourth-quarter earnings call, MillerCoors CEO Gavin Hattersley said the commercials were a “gift” and have been motivating its distributors and employees. “[T]he next few months are going to be interesting for sure,” he said.