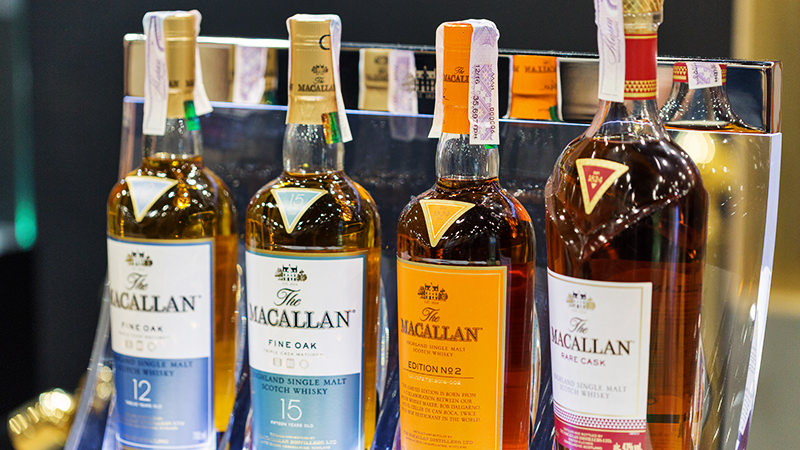 Scotch is… confusing. If you’re new to it, trying to pick Scotch whiskey is like trying to figure out which estranged relative to talk to at that big, terrifying family reunion.

The Macallan, fortunately, is one Scotch it’s easy to love immediately. Not a peat monster, no caramel coloring (though the distillery is probably haunted), Macallan produces both great entry-level Scotch (like the Macallan 10 and 12) and some of the most coveted bottles for serious collectors. (Prices vary from around 50 bucks to hundreds of thousands).

No matter how much you have to shell out, or how much you plan to imbibe, here are 10 things you should know about Macallan Scotch Whisky.

MACALLAN EXISTS BECAUSE A SCHOOLTEACHER WANTED TO GET YOU SAUCED.

If only all teachers were like this. Alexander Reid, both a barley farmer and schoolteacher, founded The Macallan Distillery in 1824, a year after the Scottish Excise Act legalized distilling.  Reid started early, and small — the first whiskey Macallan ever produced came out of a woodshed and just two pot stills. By 2013, the company announced plans to build a 100 million pound production facility.

MACALLAN IS AN O.G. SINGLE MALT.

It’s easy to get confused, but the term “single malt” doesn’t mean a whiskey was made in one barrel (though there is “single barrel” whiskey). It just means your malt whiskey was made at one distillery. Macallan was one of the first distilleries to recognize the marketability/flavor/general sexiness of single malt, which the company really started publicizing in the 1970s. That seemed to work out for them: Along with Glenfiddich and Glenlivet, Macallan makes up one-third of the entire world’s single malt whiskey market.

MACALLAN’S A SPEYSIDE WHISKY. WHICH… MEANS WHAT?

The basics of Speyside are pretty simple, and you can use them to buy whiskeys according to your palate and intimidate your friends over drinks. Speyside is an incredibly prolific subdivision of the Highlands region, roughly broken down into two types: lighter, heathery, grassy whiskeys (like Macallan), versus richer, fruitier, sweeter whiskeys. Think fruitcake, but you actually like it, and it gets you drunk enough to endure family holidays.

THE NAME ‘MACALLAN’ IS PROBABLY GAELIC.

It’s likely a combination of two Gaelic words: “Magh,” which means fertile ground or land, and “Ellan,” a reference to Irish monk St. Fillan, who brought Christianity to Scotland in the 8th century. Again, use this information to intimidate your friends over drinks.

MACALLAN IS CRAZY ABOUT ITS CASKS.

Macallan is the only Scotch distillery that has its own Master of Wood. Yes, giggle for a second, but behind that title is easily one of the most important people behind Macallan’s success. Master of Wood Stuart Macpherson painstakingly sources Macallan’s 200,000-odd oak barrels from oak trees in the U.S. and (mostly) Spain. He has them dried, shaped at a Spanish cooperage, and seasoned with Oloroso sherry, which contributes richness to the final product. The process is about 10 times more expensive than most oak-barrel production. Which is why… bottles like this exist.

It’s been scientifically confirmed that most buildings in the U.K. are probably haunted, but Macallan’s flagship Easter Elchies estate might definitely be haunted. Roderick Kemp took over Macallan in 1892. Beyond introducing the essential Spanish sherry casks, Kemp, who was supposedly a bit of a difficult boss, is rumored to haunt the estate to this day. Let the boss nightmares ensue.

SOME WHISKY IS DYED. MACALLAN’S IS ALL-NATURAL.

There’s something hypnotic about the brown-sugary luster of whiskey. There’s also something artificial. Most of us don’t know that, and most of us — consciously or not — tend to judge a whiskey’s depth by a color that’s artificially hued. Macallan is one of the few whiskey producers that doesn’t use caramel coloring, which is why it seems to pack inordinate amounts of chewy fruit flavor despite a light color. (In case you were wondering, some wine producers douse red wine with something called Mega Purple. Just FYI.)

You don’t have to drink Scotch alone while looking serious, or even wearing a monocle. If you don’t quite like the straight-up flavor of Scotch, you can try a cocktail, including this one created by Pete Canny of The Wayland in NYC. It’s easy to make and full of warming flavors (orange, cinnamon, clove).

FOR MACALLAN, AT LEAST, SIZE MATTERS.

Not the way, you’d think. Macallan whiskey is famous for its self-described “curiously small stills,” among the smallest copper pot stills in the business. The basic concept — and obvious success — of using smaller stills has to do with surface-area contact between alcohol and copper, increasing heat and creating more depth and richness in the distillate. Adding small to small, Macallan uses a tiny “cut” (or portion) of the distillate — 16 percent of the alcohol they’re evaporating — to create the final product. (If you want to get even smaller, you can find copper pot still Macallan decanters online, which are just… adorable.)

A BOTTLE OF MACALLAN ONCE COST AS MUCH AS GOING TO COLLEGE… LIKE, THREE TIMES.

A bottle of 1946 Macallan in a specially crafted crystal Lalique bottle sold at auction for $460,000 in April 2017, making it one of the most expensive whiskeys ever sold, and/or the best/worst drunk decision ever. The good news: All that money went to a charity dedicated to providing safe drinking water for about 30,000 people.

THAT SAID, BE CAREFUL WHAT YOU PAY FOR MACALLAN.

At a hotel in Switzerland, writer Zhang Wei once paid $10,000 for a shot — a shot—of what was supposedly an 1878 bottle of Macallan. Carbon dating at Oxford later confirmed the entire bottle contained a malt/grain blended whiskey, likely from the 1970s, and definitely worth much, much less.

Some Scotch drinkers like to sit back in a flatulent leather armchair with a Glencairn of peaty Lagavulin looking for notes of Band-Aid. If you’re not that person, try Macallan. Unlike stereotyped (though still delicious) peated Scotches, Macallan rings in delicate but complex, with aforementioned fruit notes, toffee, a naughty prick of nuttiness (that felt gross writing). Macallan 10 Year is easily one of the more popular starter Scotches — approachable but still complex, like that shy girl in every high school movie ever made.