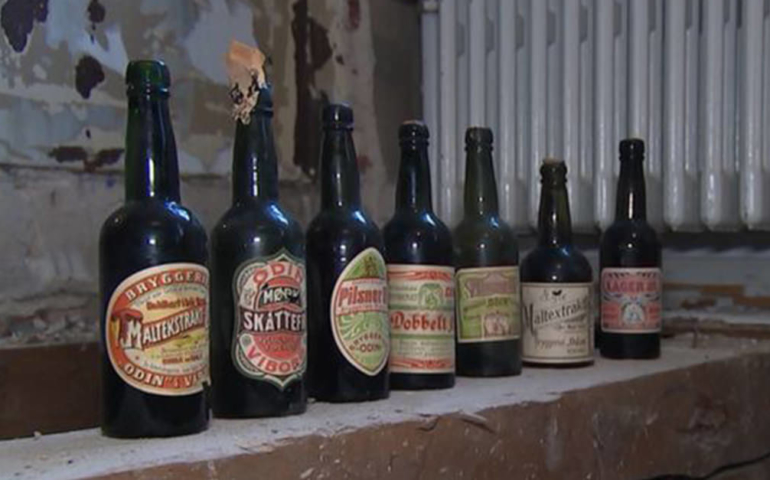 Workers on a construction site in Viborg, Denmark recently uncovered an unexpected treasure: a crate of beer hidden beneath the floorboards more than 100 years ago.

The builders, who are renovating a space that once housed Denmark’s oldest brewery, Odin Brewery, discovered the beers unopened and “in exquisite condition with corks and labels intact,” Dan Ersted Møller, Viborg Museum curator, told DR Nyheder. The builders contacted Møller as soon as they found the bottles.

“It looks like an entire palette of beer from back then. We have bottles from the Odin Brewery at the museum, but none with any content,” Møller said. Five of the bottles still have beer in them, the BBC reports.

Included with the beer was a letter dated March 20, 1906, the same year the beer is estimated to originate. The letter reads, “The old floor was removed by master carpenter Niels Nielsen and a new floor was added. As we don’t know how long this floor will last, these words and some bottles of beer we brew these days will be put under the floor.”

The letter was written by C.E. Pehrsson, Odin’s head brewer at that time, CPH Post reports.  It’s unlikely Pehrsson knew his beers would make it through two world wars, and then some.

Odin Brewery was founded in Viborg, Denmark in 1832 and closed in 1988. Its popular brands included Prinsens Bryg, Odin Pilsner, and Viborg Pilsner.

In 2008, Carlsberg brewery in Copenhagen, Denmark made a similar discovery when it found bottles of its own beer dating back to 1883. The brewery used yeast cells from those bottles to recreate the historic beer in 2016.