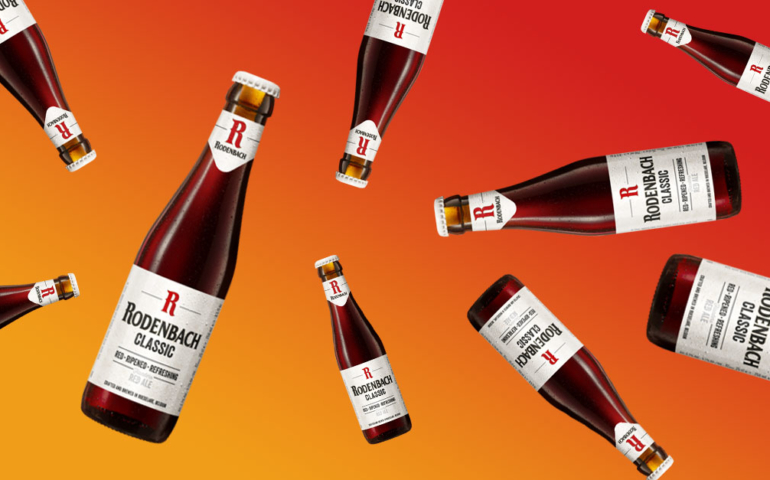 Rodenbach, a legendary Belgian brewery in West Flanders, is synonymous with the Flanders or Flemish Red beer style. Founded almost 200 years ago, the brewery is now part of Swinkels Family Brewers, a 300-year-old family business that also owns Palm.

Love sour beer? Read on for 11 more things you should know about Rodenbach.

It’s fit for a feast.

Rodenbach is made for the dinner table. It balances tart, fruity acidity with soft oak notes, like wine. It’s thirst-quenching and light on the palate, despite its deep red color and complexity from mixed-fermentation barrel aging. At about half the alcohol by volume of wine, it’s a food-pairing beverage you can pour all meal long.

You can thank Rodenbach for sour beers.

The company was founded by the Rodenbach family in 1821 in Roeselare, Belgium, a town in West Flanders. It specializes in oak-aged mixed-fermentation ales, specifically the Flemish Red Ale, a ruby-hued, tart, wine-like beer style now synonymous with the Flanders region. Sour ales are the only type of beer Rodenbach produces.

Rodenbach is the most-awarded brewery in the world, a spokesperson tells VinePair. Its accolades began in 1894 at the World’s Fair in Antwerp, Belgium. More recently, in 2018, Rodenbach’s Vintage label was named the “World’s Best Sour Beer” by the World Beer Awards.

To make Rodenbach, sour beer is aged for a minimum of two years in giant oak casks called foeders. The foeders are made with 150-year-old French oak. Each has the capacity of about 90 wine barrels, or about 8,000 gallons of beer.

Rodenbach has 294 oak foeders on its premises. They hold what the company believes is the largest collection of wood-aged beer in the world. Additionally, the brewery has its own coopers who build and maintain the enormous barrel collection.

Rodenbach’s portfolio currently includes six beers. Rodenbach Classic, the brewery’s original Flemish red ale, is a blend of one-quarter “mature” beer and three-quarters “young” beer. Rodenbach Vintage is a limited release that ages for two years in a single oak foeder before bottling. The Rodenbach Grand Cru blend is made with two-thirds mature beer and one-third young beer. Rodenbach Alexander is a blend of Rodenbach Grand Cru macerated with sour cherries, and Rodenbach Caractère Rouge is aged an extra six months with cherries, raspberries, and cranberries. It was developed in 2011 in collaboration with two-Michelin-star chef Viki Geunes.

Rodenbach’s brewmaster loves the brewery so much, he lived there.

Michael Jackson was a ‘superfan.’

Legendary beer and whiskey writer Michael Jackson (note: not the King of Pop) was a Rodenbach “superfan,” a spokesperson tells VinePair. Jackson dubbed it “the most refreshing beer in the world,” thanks to its acidity.

It’s Belgian in the truest sense.

Rodenbach is not only responsible for popularizing Belgian sour beer. It allegedly played a role in the creation of Belgium itself. According to a video produced by the brewery, the Rodenbach family helped secure Belgium’s independence from the Netherlands in 1830. Pedro Rodenbach, the brewery’s founder, was in the military and fought on the front lines of the Belgian revolution. Alexander, his brother, stood beside Leopold I when he was sworn in as the first King of the Belgians. And Constantijn, another brother, co-authored the Belgian national anthem, the Brabançonne.

“I think a lot of accidental infected beers came on the market as sour beer,” Rudi Ghequire said on the Craft Beer & Brewing podcast last year. “If I taste sour beer with dry hopping notes in it, this is not normal. Bitterness and sourness [do not] go together.”

In that case, we’d venture to guess he’s not a fan of sour IPAs.

In January 2019, Rodenbach announced its first-ever collaboration beer with Dogfish Head Craft Brewery of Milton, Del. Rudi Ghequire said in a press release that he found a “kindred spirit” in Dogfish Head, calling the partnership a “historic moment.”

Leave it to Rodenbach to keep making history.

The article 11 Things You Should Know About Rodenbach appeared first on VinePair.