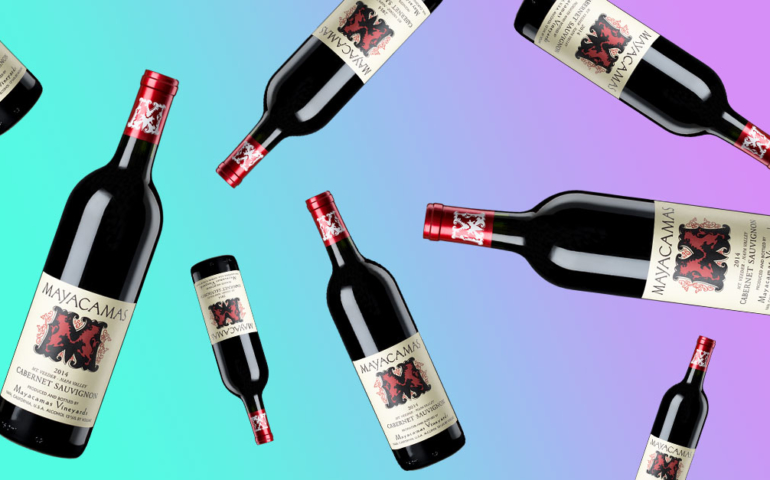 High in the Mayacamas Mountains that divide Napa and Sonoma, somewhere close to the summit of Mount Veeder, sits one Napa’s oldest and most prestigious wineries, Mayacamas Vineyards.

Constructed in 1889 by German immigrant John Henry Fisher, who built the property using stones gathered around the estate, grapes have grown continuously at Mayacamas since the first vines were planted almost 130 years ago.

From rumors of Prohibition bootlegging to popularity with NBA stars, here are 11 things you should know about Mayacamas Vineyards.

Mayacamas is a howling mountain lion.

The winery originally bore the name Fisher and Sons. It became Mayacamas in 1941, when it was renamed by new owners Jack and Mary Taylor. A nod to the mountain range on which it stands, the name comes from the indigenous Wappo language and is believed to mean “the howl of the mountain lion.” The winery pays homage to this definition by featuring two lions within the “M” on its labels.

Rumors abound that, during Prohibition, then-owners Pietro and Maria Marenco took advantage of Mayacamas’s conveniently remote cellar, using it to produce bootleg wine and grappa. The couple also legally made communion wine for the Catholic Church.

Mayacamas’s 1971 Cabernet Sauvignon played a starring role in Steven Spurrier’s famous Judgment of Paris Tasting in 1976. While it only placed 7th in the original tasting, in the second tasting, in 1986, it came in second, ahead of all French wines. In the 2006 anniversary tasting, Mayacamas placed joint third, again beating all the French wines.

The mountain’s altitude and soil shape the wine’s style.

With vineyards planted at altitudes up to 2,400 feet above the valley floor, Mayacamas is home to some of the highest-altitude winemaking in Napa. This, combined with the mountain’s cooler days and warmer evenings, provides the longest growing season and lowest yields in the valley.

On top of its unique vineyard conditions, Mayacamas makes every effort to produce wines that are in stark contrast to the rich, heavily oaked Cabernets common in the valley.

Fermentation in cement, rather than new oak barrels, helps preserve acidity and vibrant fruit character. Long-term aging in large, neutral oak foudres further allows the vineyard characteristics to shine through, lessens oxygenation, and maintains Mayacamas’s powerful tannic structure. Many of the winery’s foudres have been in near-continuous use since the 1920s.

In 2013, former financial adviser Charles Banks purchased Mayacamas in partnership with retail entrepreneur Jay Schottenstein. Following the buyout, esteemed winemaker Andy Erickson was brought on board as a consultant to work alongside Braiden Albrecht. Erickson’s résumé is littered with some of Napa Valley’s most notable brands, including Harlan, Staglin, and Screaming Eagle.

At the same time, renowned viticulturist Phil Coturri took charge of vineyard operations. He started by replanting the vineyards and converting the estate to organic farming practices.

Banks was forced to sell his stake in Mayacamas in 2017 following a fraud conviction. The former financial advisor began a four-year sentence at a Montgomery, Ala., minimum-security facility after he was found guilty of defrauding former client and retired NBA basketball star Tim Duncan. The Schottenstein family assumed 100 percent ownership of Mayacamas.

LeBron James is a big fan.

LeBron James’s love and knowledge of fine wine is well publicized. The NBA star has a thing for Mayacamas (as well as grand cru Burgundy and Super Tuscans like Sassicaia). In December 2017, LeBron celebrated his 33rd birthday at the winery and brought 60 of his then-teammates from the Cleveland Cavaliers with him.

We have a lot in common with LeBron.

Not only a favorite with NBA superstars, Mayacamas has also won numerous industry accolades, including VinePair’s best wine of 2018 for its 2014 Cabernet Sauvignon.

As the California wildfires ravaged Napa County, the blaze reached the borders of the Mayacamas estate, claiming one or two rows of vines and one of the property’s historic outbuildings, known as “the residence.” The building housed the winery’s tasting room as well as the Schottenstein family’s personal wine and cigar collection. Thankfully, the rest of the vineyards and the original 1889 winery remained untouched by the fires.