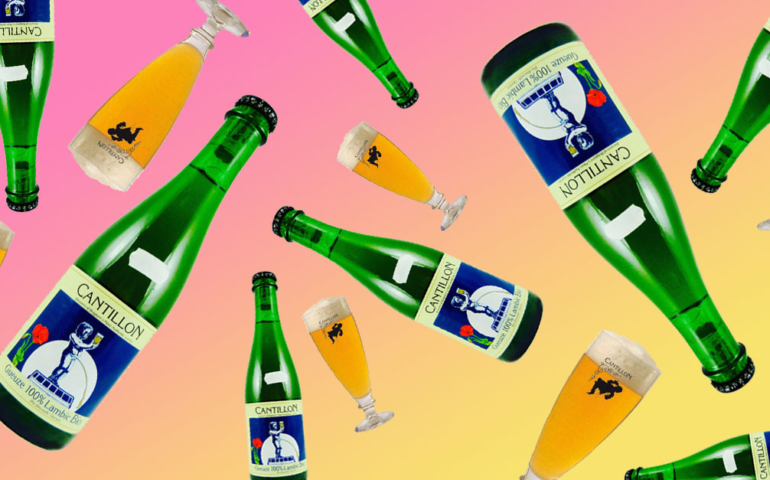 Its beer was once near extinction, but today is among the rarest and most revered liquids in the world. If you’re lucky enough to lift Cantillon to your lips, you’ll be sipping history. Here are 11 things you should know about the legendary Belgian brewer and blender.

Cantillon is a family name.

The company was founded by Paul Cantillon and Marie Troch in 1900. In 1937, their sons Robert and Marcel joined the business. Shortly thereafter, both brothers departed for World War II. After the war, with sales in decline, Robert sold his portion of the business to Marcel. Soon, Marcel wanted out, too. Marcel’s daughter, Claude, saved the family business. Her husband, Jean-Pierre Van Roy, took over the brewery in the early 1970s. Their son, Jean Van Roy, is Cantillon’s current owner and brewmaster.

Cantillon is a liquid time machine.

To make its fruited lambics, Cantillon blends spontaneously fermented sour ale aged an average of 20 months with fresh fruit. It sits for two to three months, then is blended with one-year-old lambic, then aged in oak barrels. When cherries are added, it’s called kriek, the Dutch word for “cherry.” When raspberries are added, it’s called framboise, the French word for “raspberry.” Cantillon has also produced lambics with other fruits, such as apricots and red currants.

To make its gueuze, Cantillon blends lambics aged between one and three years, then lets the liquid rest in bottles for an average of a year.

The brewery is a museum.

Cantillon is both a fully operational brewery and gueuze museum. Behind its wide wooden doors are well-worn wood floors and creaky steps, criss-crossing rafters, and rows of barrels. Century-old copper equipment glints in the soft light, and glass bottles await their fills of lambic and gueuze. The museum portion of the brewery was founded in 1978, when then-owner Jean-Pierre Van Roy sought to preserve the brewery’s traditions — and its bank account. According to Cantillon, Van Roy’s objective was to save Cantillon from bankruptcy. It’s hard to believe now, when Cantillon is among the world’s most sought-after beers.

For more than three decades, it didn’t brew beer.

Cantillon brewed its first batch of beer in 1938. For the first 37 years, it was a blendery. A blendery, or blending house, is a business that finishes, blends, packages, and sells lambic and gueuze using wort made by other producers. Similar to blending wine or whiskey, or finishing cheese, blending houses were common in Belgium and still exist today.

It has its own holiday.

Zwanze Day, named after a beer of the same name, originated in 2008. It has since become a worldwide celebration. Each year, a select few bars around the world are granted kegs of the special Zwanze Day beer and serve it at exceedingly popular events to those in the know.

Cantillon is traditionally served in a wicker basket, with the bottle lying sideways. The idea here is akin to resting sparkling wine on lees: It keeps the yeast and other materials within the liquid from being agitated, and ideally keeps them out of your glass (although some drinkers don’t mind a little probiotic boost).

It sometimes comes in a bag, Franzia-style.

Some bars in Belgium get their Cantillon direct from the source, in plastic packaging akin to that used in boxed wine.

Its beer is a prized possession.

You can easily find Cantillon on draft — on draft! — in Belgium, and bars and shops around the world sell bottles for just a few euros. In the U.S., however, Cantillon is a rare gem. If you can find it at all, it can cost a minimum of $30 and upwards of $100 per 750-milliliter bottle.

Cantillon is famous for its coolship, a copper vessel used to “rest” and cool wort and introduce wild yeast and microbes before beer ferments. It inspired U.S. breweries like Allagash to incorporate coolship fermentation into their own wild beer production.

Those of us lucky enough to visit Cantillon know something slightly unappetizing about this beautiful beer: It’s dirty. Really dirty. Spiderwebs drape between barrels, and bungs bubble with sticky liquid that catches (and preserves) tiny flies. It’s all completely intentional — the brewer doesn’t want to disturb the natural environment.

Cantillon wants you to stop and smell the Rosé de Gambrinus.

Gracefully scrawled on a barrel head at the Cantillon brewery is the phrase, “Le temps ne respecte pas ce qui se fait sans lui.” It translates, roughly, to “time does not respect what is done without it.” Cantillon takes its time, and should you encounter it, we think you should, too.

The article 11 Things You Should Know About Cantillon appeared first on VinePair.