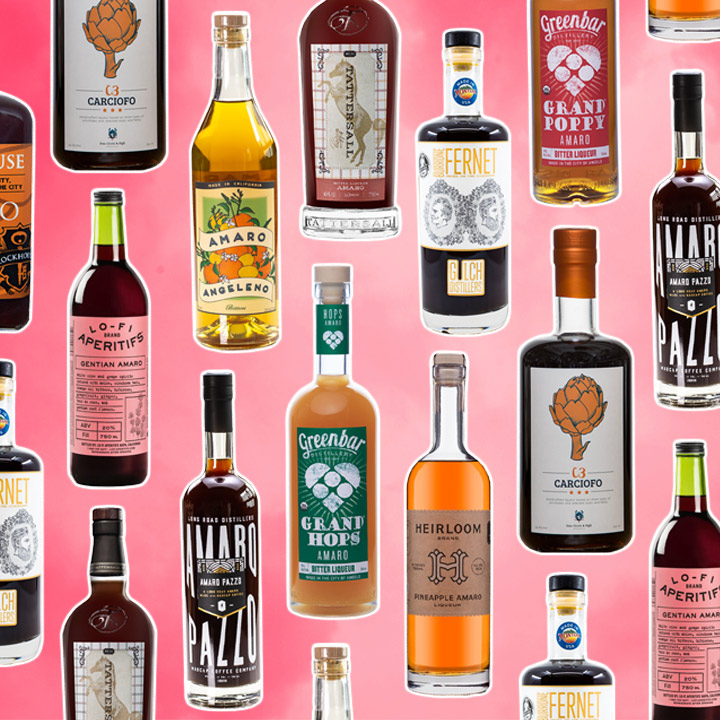 Minnesota fernet? Pineapple amaro? Our collective thirst for the Italian liqueur amaro is no bitter pill. So fully have we embraced the low-alcohol, bark and botanical-based digestif that it was only a matter of time before American-made versions began to blossom.

Around the turn of our current decade, companies like Root in Pennsylvania and Leopold Bros.in Colorado launched some of the first serious forays into the domain of digestifs. Today, producers from Buffalo to Los Angeles are on the forefront of a second wave of homegrown amaros. These are 10 standouts to check out right now.

In a nod to Cynar, this amaro from Don Ciccio & Figli, based in Washington, D.C., veers traditional. It’s not surprising, as owner and distiller Francisco Amodeo is the fifth generation to try his hand at the family recipes started by his great grandfather on the Amalfi Coast in the late 19th century. “The C3 Carciofo is based on a very old recipe dating back to 1911,” says Amodeo. The amaro now consists of three different varieties of California artichokes employed to get just the right savory, vegetal note, along with Texas-sourced grapefruit and around 18 other botanicals. It leaves you with a savory, pleasing across-the-palate bitterness that works on its own or makes a more brooding swap out for Campari in a Boulevardier.

Journalists turned distillery owners Melkon Khosrovian and Litty Matthews are fond of turning ideas upside down and inside out to find new directions from which to approach a project. Inspired by the tradition of West Coast IPAs, the bitter here comes not from typical amari agents but from bravo, citra and simcoe hops, which are the dominant aromatic and, along with some counterbalance from sugar cane, flavor—pretty clever. Less of a sip-alone style, this New World amaro is ripe for playing around with, especially for the beer-or-bust buddies in your crowd.

It’s fun to sniff this New World amaro and try to pick out the botanicals, of which there are many: organic California poppy and bay leaf; an abundance of citrus, the likes of orange, lemon and grapefruit; bearberry, pink peppercorn, dandelion, blessed thistle, burdock, rue, artichoke, gentian, geranium and cherry bark. Similar to Angeleno’s entry, this amaro feels more vermouth-like in style and certainly makes for a versatile cocktail modifier or nice addition to a glass of brut prosecco.

Started by Tyrrell Hibbard and Steffen Rasile in Helena, Mont., in 2015, this impressive fernet is a beautifully balanced blend of saffron, chamomile, mint, myrrh, rhubarb and other local botanicals macerated in a Montana-sourced grain base. Not only are the intense but well-mingled flavors harmonious, but the finish leaves you with a just-right retrained bitterness in this 71-proof amaro. “Amaro is the main reason I got into the distilling business, says Rasile. “I was always amazed by the wide variety of flavors and complexity of a single category of liquor.”

It may have been the cold climes of Lockhouse’s home city of Buffalo that inspired the ultimate style of this cozy digestif. Cinchona, quasia root and blessed thistle amp up the bitter side of things, and the rest of the well-rounded flavors are dominated by a melding of sassafras, orange and lemon peel, cardamom and cinnamon, all macerated in a New York corn-sourced base spirit. All together, they’ll make you seek out the closest comfy chair parked in front of a fireplace. While turbinado sugar is the main source of sweetener, “we wanted to give some perceived and natural sweetness from the botanicals to this spirit as well, so we toyed around with using locally sourced raw diced beet and elderberries,” says co-owner Cory Muscato. “I find amari to be so fascinating and storied because of the wide range of styles and production methods used to make them.”

A spin-off dreamed up by the bartender-owners of Milwaukee-based Bittercube Bitters, Heirloom aims at the exotic with its line of liqueurs, which just launched summer 2018. From its deep golden color to its rich, plush, slippery texture and exotic candied-pineapple nose, Heirloom’s tropical-minded entry is a think-outside-the-boot bottling that begs for Tikiexperimentation or even a couple of ice cubes, cucumber slices and a splash of club soda on a hot summer day.

It makes sense that the wine region that put the U.S. on the map might be home to amaro production and with one of the most successful still-family owned companies behind it to boot. Lo-Fi is a Napa-based collaboration between E. & J. Gallo and Steven Grasse (of Root, Hendrick’sand Sailor Jerry fame). Their gentian amaro begins with a fortified-white-wine base and, in addition to the namesake botanical, also contains anise, cinchona bark, hibiscus, grapefruit, ginger, bois de rose and orange oil bitters. It has a distinctively fruity, floral character and feels juicy and fresh in your mouth, with a lingering, gentle citrus-zest finish. It makes a nice sub for Aperol in a Spritz.

Released in December, this is a collaboration between two Grand Rapids, Mich., producers: Long Road Distillers and Madcap Coffee Company. The bean base they settled upon for the liqueur is Reko from the Kochere region of Ethiopia and offers a citrus oil and candied ginger richness to the combo of botanicals used in the amaro, notably myrrh, turkey rhubarb, orange and wormwood. While they aren’t the first to make an amaro that looks to coffee for some extra complexity, they do appear to be the first to think carefully about what that coffee is and should be (aka, a single origin) and to really dial in how it plays with the botanicals.

If an amaro can stand tall on the pedestal of pretty, this one from L.A.’s Ventura Spirits has perfect posture. Ventura is all about sourcing from the abundance of California’s great produce, starting with its wine base, which comes from Paso Robles and gets fortified with local brandy before the maceration begins. And those local botanicals are a fresh, fragrant garden of delight: orange and lemon peel, lemon verbena, rose, chamomile, jasmine, marjoram (those last three plus the citrus really shine in the aromatics) and bits of sassy spice added from star anise and sassafras. With the grounding base notes from rue, gentian and quassia bark, which add a chocolaty note at the finish, it almost drinks more like an aromatized wine then an amaro. But sip it you shall, as that’s truly the best way to experience this, although it does play surprisingly well with bourbon.

According to co-founder Jon Kreidler, this amaro has a whopping 25 botanicals macerated in the organic corn spirit base. As is traditional with amari, it sits in oak for a spell so flavors will mingle to best effect. There’s a really cool savory quality to this amaro that presents itself with aromatics of dried porcini mushrooms, sage, fennel and cardamom. It’s bright and zippy on your palate and leaves a gentle, lingering bitter mintiness on your tongue that makes you want to pick it up again and again.

Tattersall’s fernet rocks out of the gate with a gorgeous alpine chocolate-minty nose, along with notes of sassafras, walk-through-the-forest pine and licorice. It clocks in a slightly higher ABV than the amaro (35 percent as opposed to 30 percent), and that minty quality really accentuates the extra heat, along with a growing punch of barky bitterness that make this American-made fernet oh-so satisfying after a wintry, gut-busting, high-carb meaty meal.