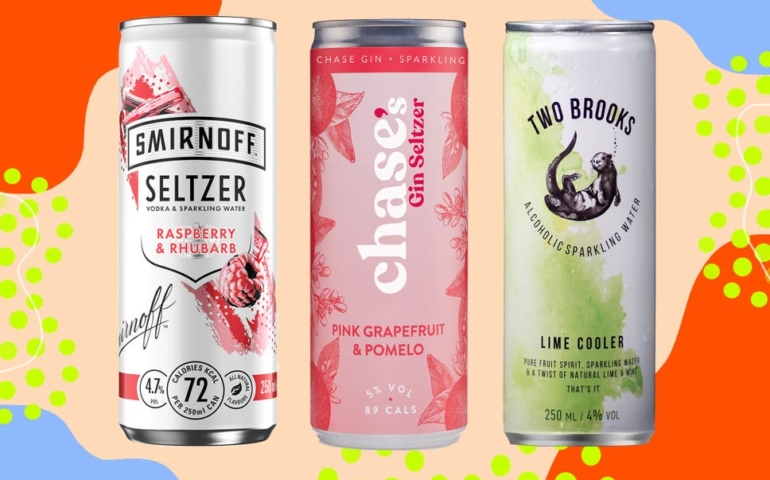 Hard seltzers have made their way over from the US and, with a rush of new launches, are set to dominate this summer.

But, what exactly is a hard seltzer? Simply an alcoholic flavored sparkling water. Brand owners use an array of different booze bases – from gin and vodka to fermented fruit and cane sugar, or a neutral grain spirit.

Low-ish ABV, low calorie, and often low-sugar, gluten-free, or with no added sweeteners (though not all), hard seltzers have been pitched as a great summer refresher.

Packaged in slim, single-serve cans, they’re a convenient, more virtuous replacement for the alcopops of old.

It’s been a few years now since the craze truly took hold in the US, with brands such as White Claw and Truly gaining cult followings for their range of low-calorie sparkling waters, spiked with booze and fruit flavors, accompanied by marketing images of fit young things in workout gear.

Tapping into health and wellness trends – and packaged in handy, and consciously Instragrammable cans – hard seltzers sales have boomed across the pond.

The category is currently valued at $2.5bn (£1.9bn), having grown sales by more than 240 per cent in 2019. And now, brand owners are coming for the UK, with everyone from Scottish brewer BrewDog to Aldi joining in on the trend.

New launches continue, with gin brand 58 Gin, and Served, which uses sustainably sourced fruit launched as we went to press. Expect many, many more throughout the summer.

From putting together our list, one thing has become clear: this much-hyped drink of the summer certainly divides opinions. Loved by some for its low-calorie approach to enjoying a boozy treat, their detractors mainly criticise this new and burgeoning drinks category for being, dare we say it, a little bland.

So, are they any good? Let’s be clear, hard seltzers are not claiming to be the most flavoursome, characterful drinks out there. They’re claiming to be the best for you, or at least, the least bad. If your drink of choice is a peaty whisky or a complex rum, then sure, they may not be for you. But if you’re looking for a lighter pre-mixed option – or you simply don’t enjoy boozy tasting drinks – then there’s a wide array of tasty flavour choices out there.

From our research, we found a very varied approach when it came to flavour. Where some brands proudly display sugar-free claims on cans, others opt to use artificial sweeteners or sugar (while still being low calorie) to boost their appeal to consumers that like things more on the sweet side. We’ve made that clear in our list.

And with an array of different fruit flavours on offer – some enhanced with a little mint, or even chilli – there’s enough variety to please most. We’ve looked to bring you a varied array of what we think are the best.

You can trust our independent reviews. We may earn a commission from some of the retailers, but we never allow this to influence selections. This revenue helps us to fund journalism across The Independent.

One of the early birds in the UK hard seltzer scene, Bodega Bay launched in 2019. Delicate and floral, the range consists of two flavours; apple with ginger and açai berry and elderflower with lemon and mint. Both are 73 calories per can and contain 4.5g of naturally occurring sugars. Neatly avoiding the overly syrupy taste some brands stray into, both are flavourful and balanced while also being vegan-friendly and gluten-free. While the apple has a little heat from the ginger, we love the delicate, freshness of the elderflower.

It might be a surprise to some that craft brewer BrewDog has joined the fray, but it makes sense. With hard seltzer eating into beer sales in the US, many brewers Stateside have launched boozy waters over the past few years, and indeed a number of UK launches herald from brewers too. But with BrewDog famous for marching to the beat of its own drum, what makes clean and press different from other seltzers? Well, rather than being fermented like a number of products on our list, the clean and press seltzer uses BrewDog’s own single malt vodka, Rogue Wave, as a base, combined with sparkling Scottish water, and infused with natural fruit flavours. All are zero carbs, zero sugar, and weigh in at 90 calories per can.

Founded by London-based siblings Francesca and Fabio, the Two Brooks seltzer is made using a fruit spirit base derived from British apples. Add filtered sparkling water, and natural fruit flavours, and that’s it. Gluten-free, vegan-friendly and clocking in at 80 calories per can, the range is available in three flavours, including passion star, and mango hi-ball. But we like the lime cooler best of all. The first thing you’ll notice is the strong mint aroma, which leans towards peppermint. In fact, even though there’s of course lime in here, the mint dominates, with the citrus coming in a clear second in the overall balance of flavours. And unlike some of the other brands here which have been sweetened, Two Brooks does taste very natural. There’s no sweet after taste or boozy burn. The closest we can compare this to is a simple lime and soda. Serve chilled with a mint or lime garnish.

After an initial launch with Whole Foods in 2019, DRTY hard seltzer is now available through retailers including Amazon and Ocado. Consisting of two flavours – white citrus, and raspberry rosé – the range is 90 calories a can, zero carbs and zero sugar, using fermented fruit as its base. The white citrus is a combination of white grapefruit and limes and, said to taste like a vodka soda, has a distinctive sour finish. The raspberry rosé combines raspberries, hibiscus and rose water for a lighter take on sparkling rosé. Subtle but balanced, we like the balance of ripe raspberries with delicate floral notes.

Claiming to be the world’s first gin-based seltzer, this tasty sipper comes from field-to-bottle craft distiller, Chase. Putting a British spin on an American trend, it uses Chase’s award-winning gin as a base, combining it with sparkling water with natural botanical flavours – all sourced and canned on the family farm in Herefordshire. At 89 calories per 250ml can, the range is available in three flavours, including Seville orange, London dry and lemon, but we’re rather taken with the fruity pink grapefruit and pomelo. It has to be said, this is one of the sweeter tasting products on our list and does contain sugar, and for some that will be a plus, tasting more akin to a flavoured gin and tonic than some of the other seltzers here, but of course, minus the bitterness.

Independent British start-up Natrl claims that protecting the environment is the core of the brand, with a pledge to donate five per cent of profits to environmental charities, including a partnership with Plastic Oceans, a non-profit organization raising awareness of plastic pollution. At 4 per cent ABV and 75 calories per can, calorie-wise the two-flavour range is one of the lightest on our list. Natrl uses a base made from filtered alcohol derived from sugar beet, sparkling water and natural fruit flavours, with no additives or sweeteners. However, each 250ml can of Natrl contains 2.75g of sugar, which it has to be said, isn’t the highest here. Smooth and lightly carbonated, the peach and raspberry is a little sweeter than the lemon and lime and is dominated by the mellow but bold peach notes, with a lingering sweet finish. While the lemon and lime is sharper, with lemon the strongest note. Buy as a single flavour or mixed variety pack.

The brand that started it all, White Claw has become something of a cult hit in the US as the nation’s, albeit self-described, most successful new alcohol brand in a generation. Initially launched in the States in 2016 it now claims a whopping 60 per cent share of the market there. And now the UK is its first overseas foray. So, what’s all the fuss about? At 4.5% ABV, all three flavours – black cherry, natural lime, and raspberry – are 95 calories each and contains 2g of carbs, no artificial sweeteners, and uses natural flavours, and are gluten-free. We like the raspberry, and black cherry variants the best, for its slightly subtler, refreshing flavour. 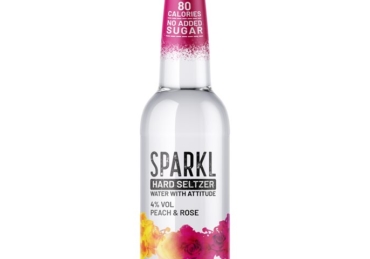 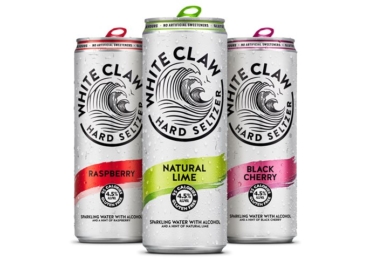 White Claw Hard Seltzer to Launch in the Uk Next Month 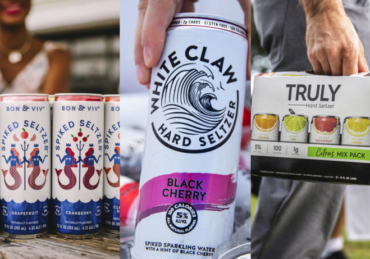 Behind the Meteoric Rise of Hard Seltzer