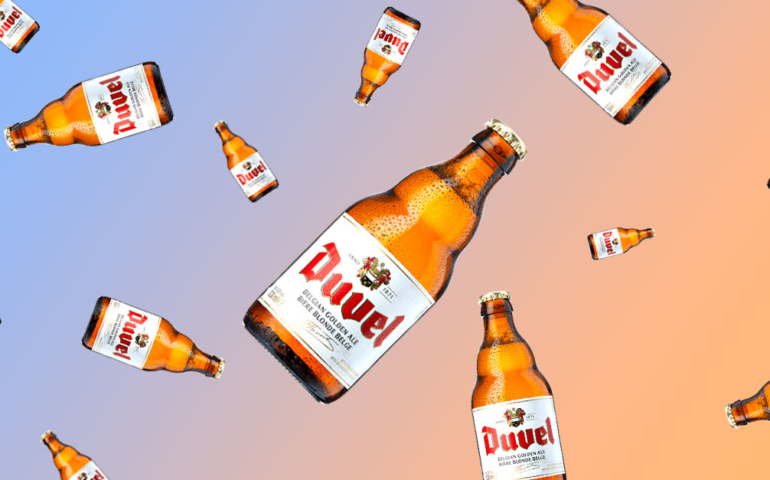 Duvel (pronounced DOO-vul, not doo-VELLE) is the namesake beer produced by Duvel Moortgat, and the quintessential Belgian strong golden ale. That’s probably why the label describes itself as “special beer.”

Based in Puurs, Belgium, the brewery also owns several other brands around the globe. Thirsty for more? Here are 10 things you should know about Duvel.

Duvel is a family brand.

In 1999, Duvel Moortgat became a public company. Since then, it’s acquired several brands around the world, including Brasserie d’Achouffe (2006), Liefmans (2008), and Brouwerij De Koninck (2010) in Belgium; and Brewery Ommegang (2005), Boulevard Brewing (2013), and Firestone Walker (2015) in the U.S. Duvel Moortgat also has an ownership stake in the Czech Republic’s Brewery Bernard.

The famous Belgian beer has some Scottish in its DNA. In 1918, during World War I, Albert Moortgat embarked on an epic adventure to the U.K. in search of a specific English yeast strain. He ended up at a Scottish brewery where he took a sample. Duvel’s yeast is still cultured from that strain today.

Duvel was (a) Victory.

Although Brouwerij Moortgat had been producing beer for more than 50 years, the Duvel brand did not emerge until 1923. The beer that would become Duvel was originally called Victory Ale, and it debuted in 1918 to celebrate the end of WWI.

According to Duvel lore, a shoemaker attending a tasting session with other “local notables” remarked that the beer was “a real devil.” The name stuck. It may not seem scandalous today, but it was a rebellious choice at the time, when a majority of the region was Catholic (and, you know, monks were brewing beer).

At its production facility in Belgium, written across the building in bold, red letters is the message: “SSST… HIER RIJPT DEN DUVEL.” (Rough translation: Shhh… Here rests the devil.) It means the Duvel is resting as it referments in its bottles, finishing out its total fermentation time of 90 days.

In 2018, Duvel released its single-fermented strong golden ale in a slick-looking tallboy featuring a black canvas and red lettering. Duvel Single Fermented, once only available on draft, was one VinePair’s best beers of 2018.

In 2018, Duvel won a gold medal in its category at the Brussels Beer Challenge, an international competition counting 1,522 beers from 48 countries in the “Pale & Amber Ale: Strong Blonde / Golden Ale” category alone.

You can drink Duvel three ways.

Along with Duvel and Duvel Single Fermented, there’s Duvel Tripel Hop, a bitterer, boozier brew. Like the other Duvels, it’s hopped with Saaz and Styrian Golding hops during brewing. What sets it apart is dry-hopping, when it’s conditioned with full Citra hop cones.

Wake up and smell the tulip glass.

In 1960, Duvel became the first beer brand to develop its own tulip glass. It was engineered to hold the full contents of a 33-cl bottle of Duvel beer, plus plenty of room for head to boost its herbal aromas. Since 2010, Duvel has partnered with local artists to create limited-edition tulip glasses with eye-catching graphics and colorful designs. Dutch artist Parra created our personal favorite.

It’s setting and achieving goals for the Earth.

Duvel demonstrates its commitment to the environment through several goals it often describes, entertainingly, in sports terms. For example, each week, the brewery purifies 7,500 cubic meters (that’s 1,981,290 U.S. gallons) of water, the equivalent of three Olympic swimming pools. Additionally, the roofs of its maturation facilities are equipped with solar panels — two football fields’ worth — to produce eco-friendly electricity, some of which is used to power its all-electric forklifts and trucks. In partnership with WeForest and Bos+, Duvel also plans to plant enough trees to cover the equivalent of 750 football fields by the end of 2020.

Duvel donates its beer “draff,” or spent grain, to local cattle farmers. According to the brewery, the draff’s rough texture improves cows’ digestion, and gives them a glossy coat.

The article 10 Things You Should Know About Duvel appeared first on VinePair.